It is a shame Section 377 still exists. SC must uphold human dignity over false morality

No, homosexuality is not unnatural, not a choice, not a perversion.

A five-judge bench of the Supreme Court on July 10 began examining the constitutional validity of Section 377 of the Indian Penal Code, which criminalises “unnatural sex”, including homosexuality. It cannot be overstated how much rides on the outcome of this hearing. 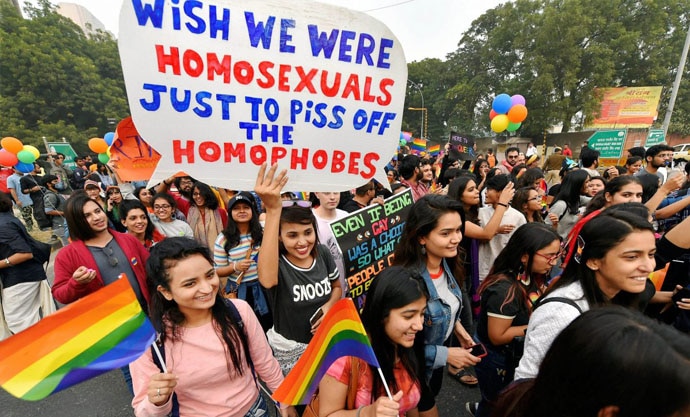 Pride and prejudice: Participants of pride parades show immense courage in turning up in public each year. They should not have to. (Photo: PTI/File)

The stance that the court takes will show how far we have progressed as a society. No mature democracy, no society that believes in equality of all human beings, should have a law that discriminates against people on the basis of their sexual preference.

But more importantly, the court’s stand will decide if lakhs of individual Indians will be assured a life of dignity, free from a law that makes them vulnerable to victimisation, humiliation, and bullying, leaves their most private matters open to invasion by guardians of “public morality”, and sharpens considerably the knife-edge of the discrimination and exclusion they live with.

There is nothing debatable here

First things first: homosexuality is not unnatural, even the Indian Psychiatry Society says so. It is not a lifestyle choice. It is not a perversion. It is as natural as being born right-handed or left, tall or short. It is not something you choose.

And the price the LGBTQ+ community is made to pay is steep — your everyday existence becomes a fight, a lie, or both.

Making homosexuality illegal cuts off a lot that could make life easier for the LGBTQ+ community.

It is not easy knowing you are different. Criminalising homosexuality invisibalises it, so teenagers struggling with their sexuality have few public figures, pop culture icons, cinema characters to look up to, to know they are not alone. They cannot openly discuss their struggles. They cannot seek counselling and support.

Parents are left equally adrift, with no one to help understand what their children are going through. Knowing that their children will be subjected to ridicule, discrimination, outright venom, parents force the kids to confirm, to be “normal”, making their lives that much more difficult.

If homosexuality is decriminalised, it will clear the path for open conversations and discussions over it, helping dispel doubts and misconceptions. The society owes this to homosexuals, and to itself.

Criminalisation of homosexuality leaves people vulnerable to many other crimes. As per a RTI reply received by The Sunday Guardian, the Delhi police picked up nearly 100 people under Section 377 in 2015 and 2016, but was able to charge-sheet only half that number, because a lot of complaints were false and “motivated”. Accept every shade: A truly democratic society would be one that criminalises discrimination on the basis of sexual identity. (Photo: PTI/file)

Homosexuals who have been sexually abused, discriminated against at work, bullied, humiliated, cannot seek legal recourse, because in the eyes of the law, their mere existence criminalises them.

A law that is a means to perpetrate crime and subjugation clearly needs to go.

Even legally, Section 377 stands on tenuous grounds. The August 2017 privacy judgment of the Supreme Court clearly says: “Privacy includes at its core the preservation of personal intimacies, the sanctity of family life, marriage, procreation, the home and sexual orientation... Privacy also connotes a right to be left alone.”

This effectively decriminalises homosexuality, and if the court takes a different stand now, it will contradict itself.

Also, the 2013 SC judgment that reinstated Section 377 did so saying it was the Parliament’s job to make laws, and not the court’s. However, this law was not passed by our Parliament at all, but is a British era legislation, a detritus of Victorian morality.  Britain, incidentally, decriminalised homosexuality in 1967.

“Against Indian culture” is not a good enough excuse to deny people their dignity and humanity. Incidentally, it is also false. Ancient Indian culture has enough references to homosexual relationships.

Societal mindsets take decades, even centuries to change. Sometimes, the law needs to lead that change. Had we left everything to public sensibilities, untouchability and Sati would still be legal.

The point remains that in the 21st century, the law has access to people’s bedrooms, policing what two consenting adults do.

A law that by its mere existence sentencing people to a lifetime of confusion, questioning and conflict is unfair, and has no place in a civilised society.

Also read: Homosexuality was accepted by Hindu gods. So what is your problem?

#Supreme Court, #Lgbtq rights, #Homosexuality, #Section 377
The views and opinions expressed in this article are those of the authors and do not necessarily reflect the official policy or position of DailyO.in or the India Today Group. The writers are solely responsible for any claims arising out of the contents of this article.