Section 377 struck down: Why the war is far from over

Celebrity writer Vikram Seth appeared on the cover of India Today's December 30, 2013, issue, bleary-eyed, bedraggled and seemingly on prison row with a board that read 'Not a Criminal'.

This powerful visual was a not-so-thinly-veiled metaphor for the fear that stalked Seth, an openly gay public figure, and millions like him. Being gay in India, as Seth's mother, the late Justice Leila Seth, wrote in a newspaper editorial, was like leading the life of 'an unapprehended felon'.

The glimmer of hope that emerged in 2009 for Seth and millions of Indians like him when the Delhi High Court decriminalised gay sex was quickly extinguished in 2013 when the Supreme Court re-criminalised it.

For a society that has celebrated sex and erotica for over a millennium through art, sculpture and, indeed, the finest ancient treatise on sexual behaviour, the Kamasutra, it is peculiar how crudely modern India's laws have looked at sex. Alternative sexuality has remained locked away in a colonial-era prison called Section 377 that made 'carnal intercourse against the order of nature' a criminal offence. 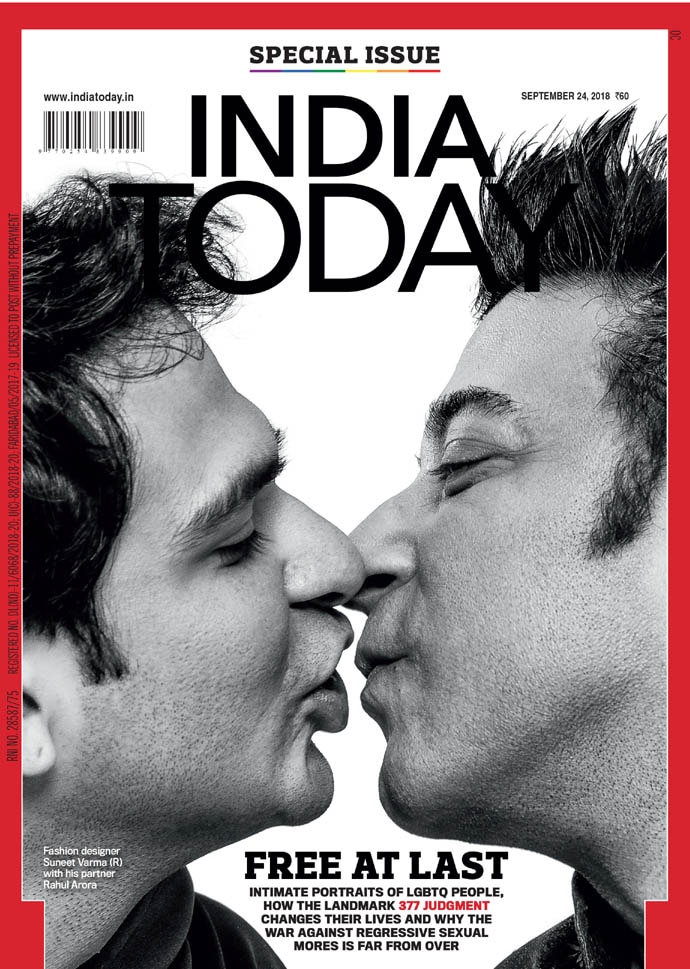 It was only eight years ago that the Supreme Court observed that pre-marital sex between consenting men and women was not an offence and just last month that a constitutional bench described the IPC penalties for adultery as 'peculiar'. And now, in a truly historic decision on September 6, a five-judge bench of the apex court finally declared Section 377 as unconstitutional.

Recalling the spirit of recent landmark rulings that have emphasised individual freedoms like the right to privacy, Chief Justice Dipak Misra quoted German thinker Johann Wolfgang von Goethe: "I am what I am, so take me as I am."

The weeding out of this regressive law has come as a release for persons of alternative sexuality who form between seven and eight per cent of India's population. The court has explained how early theories of homo-sexuality as a form of psychopathology or developmental arrest gave way to more enlightened perspectives that came to look at it "as a normal and natural variant of human sexuality"; how laws like 377 create an environment for blackmail, harassment and violence against that counterculture; or how 24 countries now allow same-sex couples to marry, while 28 countries legally recognise such partnerships.

Our cover story package 'Free at Last', put together by executive editor Damayanti Datta and associate editor Chinki Sinha, examines the import of this landmark judgment for Indian society, the undiscovered country for same sex couples who will now try and lead normal family lives, rent homes and adopt children and inherit property. We have tried to see some of these challenges through the eyes of a gay couple, a lesbian couple and two single gay persons in rural and urban India respectively.

Author and professor Madhavi Menon looks at the moral and cultural underpinnings of the judgment, lawyer Siddharth Narrain examines how the four judgments by the five-judge bench impact LGBT rights and the larger struggle for freedom.

As I wrote in 2013, the debate is not just about gay rights. It is about ensuring that any minority, no matter how small or private, must not be attacked simply for being who they are. The Supreme Court's newest judgment is clearly the beginning of a progressive struggle for personal liberties which the great Indian family does not give its members. In the light of this judgment and its stance on individual freedoms, there are compelling reasons that demand a relook at archaic Indian Penal Code provisions that turn a blind eye to widespread problems like marital rape or stalking and adultery laws that seem to treat women as property.

Rectifying them would be further steps towards a progressive society that truly promotes individual freedom, especially for those who do no harm to anyone.

Three cheers to the Supreme Court for moving in that direction.