August 15: Why Bangladesh’s founding father Sheikh Mujibur Rahman was assassinated by the army

On a day India is celebrating its Independence Day, its friendly neighbour Bangladesh is commemorating the country’s founding father, Sheikh Mujibur Rahman, who was assassinated on August 15, 1975.

He was killed along with his family in the wee hours of August 15. The only two family members who managed to survive were his two daughters — Sheikh Hasina and Sheikh Rehana. The two were in Europe when a military misadventure claimed the lives of Mujibur Rahman and their other family members. The assassination came at a time when Bangladesh was just trying to find its feet as an independent nation after years of repression at the hands of Pakistan.

The assassination is believed to be the handiwork of the Pakistani 'deep state' that had the support of the anti-India forces and a section of Bangladeshis as well.

While it was for a long time believed that nobody had a whiff of the planning of the attack, it has now emerged that former Indian Prime Minister Indira Gandhi had personally warned Mujibur Rahman of an imminent threat to his life.

It is also reported that the then R&AW chief had positioned a helicopter to pull out Mujibur Rahman from Dhaka and take him to a safe haven in case there was an attack on him.

Unfortunately, that was not to be. The rest is history.

Mujib’s own cabinet minister, Khondokar Mushtaq, is believed to have been involved in planning the attack. He was Mujibur Rahman’s immediate successor. Also, involved were Bangladeshi politicians with pro-Pakistan leanings, and of course, a large segment of the highly politicised army that had been deeply indoctrinated.

Significantly, the then deputy chief of army staff, General Ziaur Rahman, who later became the country’s army chief and ended up being the President, was also complicit.

He was reportedly indifferent when informed about the assassination and feigned ignorance, but couldn’t hide his complicity for too long. However, he wasn’t the only army officer involved.

Investigations proved that almost the entire army had been compromised and had turned against Mujibur Rahman.

One Farooq Ahmed fired the first salvo with his inflammatory speech directed against Mujib in which he spoke against the President and his policies. The speech was delivered a day ahead of the assassination, on August 14, 1975. 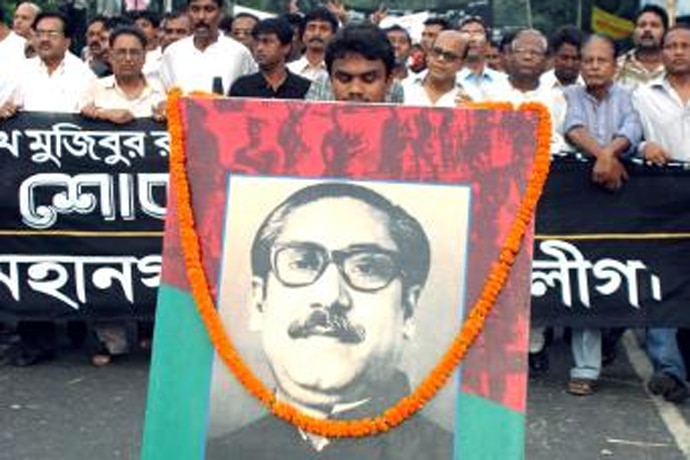 A significant villain in Mujibur Rahman’s story was Muammar Gaddafi, who reportedly ensured funding for the anti-Mujib forces.

Sadly, Faruque Rahman’s acerbic speech did not alert the security agencies to the impending threat to Mujib. Had that happened a major tragedy could have been avoided.

Mujib’s security force that was only tasked with ensuring his personal security Rakkhi Bahini too proved completely ineffective in stopping the attack.

The fact that all agencies failed to protect Mujib at every level tells a sad story of how a man revered as a father figure in Bangladesh was killed despite doing so much for the country and its people.

Shamefully, Mujib’s assassins were hugely honoured and rewarded with coveted assignments and posts post his demise.

In the foreword to the Mujib’s biography, Sheikh Mujibur Rahman: From Rebel to Founding Father, written by Syed Badrul Ahsan, noted historian AF Salahuddin Ahmed, says, “Sheikh Mujibur Rahman remains the rare instance of a statesman in history in whose name, and in whose physical absence, a nation fought its way to freedom. The surrender of Pakistan in Bangladesh in 1971 was indeed the culmination of Mujib’s long struggle for the emancipation of his people. He asked his nation to give him three years to turn the country around. His enemies made sure he did not survive. They killed him, with most of his family, on August 15, 1975. Bangabandhu Sheikh Mujibur Rahman remains in death, as he was in life time, Bangladesh’s foremost political symbol.”

Sheikh Hasina, who is at the helm of the affairs today in Bangladesh, should take note of the security and intelligence lapses leading to her father’s untimely and avoidable killing. She should be doubly cautious in ensuring that her security agencies don’t lower their guard even for a minute particularly when forces inimical to the country’s interests are on the lookout for an opportunity to meet their devilish designs.

Also read: Freedom elusive on Independence Day: Why the likes of Umar Khalid get attacked