Siddaramaiah's brutish behaviour to a woman is on camera. Is the Congress watching?

The former CM of Karnataka pushed and shoved a woman because misogynist men use women to assert their power and they know they will get away with it. Where are the champions of women's empowerment, Congress leaders Rahul and Priyanka Gandhi?

Having won 78 seats in a 224-member Assembly, state legislature and Congress leader Siddaramaiah had to vacate the Karnataka Chief Minister’s chair for HD Kumaraswamy, whose party, the Janata Dal (Secular), won only 37 seats.

This was the price the JD(S) demanded to enter a post-poll alliance with the Congress, so that the BJP, with 104 seats in the Assembly, could be kept out of contention for power in the state. Siddaramaiah had to relent because the orders to let Kumaraswamy keep the CM’s chair came from the party high command. Since then, Kumaraswamy has kept the Congress on tenterhooks by repeatedly sending out signals that he was finding it difficult to work with the grand old party and hence, was ready to call off the alliance any moment.

The BJP, meanwhile, has been keeping the alliance on edge by reportedly trying to win over Congress and JD(S) MLAs to ensure the government falls.

Quite obviously, Siddaramaiah is a frustrated man.

And he is doing what frustrated men are best at doing.

Venting out their frustration on women.

So, when a woman reportedly named Jamal Ara, who was T Narsipur taluk panchayat president a decade ago, approached Siddaramaiah with complaints about revenue officials, saying she wasn’t able to reach Congress MLA Yathindra Siddaramaiah — who coincidentally happens to be the former chief minister’s own son — the frustrated 70-year-old Siddaramaiah sprung up and snatched the mike from Ara.

When the woman’s dupatta got entangled and even fell off in the melee, Siddaramaiah was unfazed. As the woman, in a show of courage, kept speaking truth to power, Siddaramaiah asked her to shut up — he then even got up and apparently pushed her.

“Have you ever come and met me? How many times have I visited the city,” Siddaramaiah asked Ara.

If this is Siddaramaiah’s way of listening to complaints, women in Karnataka should stay away from him.

Siddaramaiah later said that the woman he was interacting with was a party worker known to him for 15 years. If this was some sort of jovial excuse for his brutish behaviour, it falls entirely flat.

Siddaramaiah may not know — being a man himself — how difficult it still is for women in this country to step out of the confines of their homes to join men in the public sphere. To shove them and push them around in the manner Siddaramaiah did, with the lady's clothing getting pulled at, goes on to scare women from navigating the public domain.

This behaviour is in fact no different from what goons indulge in across gullies and buses and trains every day.

It is hardly the sort of deportment we expect to see from a senior political leader and someone who has been in public life for decades. 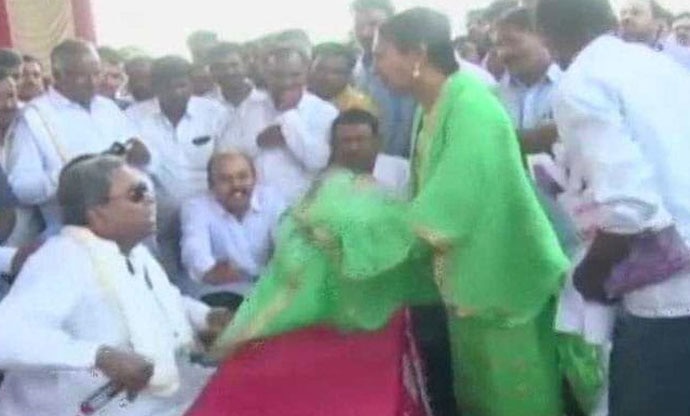 He may not be Karnataka's chief minister any longer, but Siddaramaiah continues to be a powerful man in the state. It is only natural that Ara has since made an attempt to diffuse the tension around her by saying she has no issues with the chief minister — but that shouldn’t be an excuse for people to absolve Siddaramaiah from his appalling behaviour.

This shoving, pushing and silencing of women has for long ensured their marginalisation from places that are rightfully theirs. It is time men such as Siddaramaiah who still don’t seem to understand how to behave with women are made to exit, so that women can enter public spaces without any fear.

Siddaramaiah misbehaved with Ara, a Congress member for over two decades, because he could — being a man, being a former chief minister, being a strong Congress leader.

He was unmindful of the camera because he knows he could get away with physically abusing a woman in public.

He did it because misogynist men use women to assert their power and they know they will be backed.

It is time such men are shown the opposite scenario now — are Rahul and Priyanka Gandhi listening while they chant 'women's empowerment' to us?

#Misogyny, #Jamal ara, #Karnataka, #Siddaramaiah
The views and opinions expressed in this article are those of the authors and do not necessarily reflect the official policy or position of DailyO.in or the India Today Group. The writers are solely responsible for any claims arising out of the contents of this article.