When Indians risked their lives to illegally enter US

Six Indian nationals were apprehended by the US border agents on Thursday from a sinking ship when they were trying to enter the US from Canada illegally.

Immigrating to the US in search for a better life and opportunities has been a dream for many Indians. However, reaching the America of dreams is not easy. We don’t need to look too far to assess the cost of human lives. Some risked their lives to enter the US through dangerous jungles infested with drug mafia, while some braved the biting chill. But it wasn't always a success story.

Here are 3 instances, when Indians risked their lives to enter the US: On May 5, 2022, a group of 6 Indian nationals aged 19-21 years were arrested by US border authorities from a sinking ship when they were trying to enter the US from Canada illegally. The US border patrol agents had information on suspicious activity near the region, when a ship took off from the Ontario in Canada and was headed towards the US. However, after sometime, the vessel sent out an SOS and it started sinking in the river.

The seven people on board were rescued. Six of them were Indian nationals and one was an American. All those rescued were medically examined for hypothermia and other issues as the water in the river was just above the freezing temperature. It was also reported that there were no life jackets or other safety equipment onboard the vessel.

The 6 Indian nationals were charged with illegally attempting to cross into the US, while the American was charged with smuggling.

This recent incident of Indians trying to enter the US illegally from Canada risking their lives, reminds us of the tragic January 2022 incident. Just a few months ago, in January 2022, the world awoke to the tragic and distressing news of an Indian family of four freezing to death while trying to illegally enter the US soil from Canada. The family, including the father, mother, an infant and a teenager were all from a village in Gujarat. Their attempt was unsuccessful, as the family got caught in a blizzard in the freezing temperatures near the US-Canada border, got lost and eventually froze to death.

There were several other Indian nationals on the same trail, one of whom – a woman – had to get her arm amputated due to frostbite. If it’s not the freezing temperatures between US and Canada, then it is the heat that can take the lives of those on the Donkey Trail. In 2019, a 6-year-old girl from India’s Hasanpur, Gurupreet Kaur, died of heatstroke in Arizona desert trying to cross into the US from Mexico. The girl and her mother were on the journey to New York to join her father, but fate had other plans.

The duo was trying to eneter the US illegally, through smugglers. However, the smugglers forced the family to cross the border during the daytime when temperatures soared around 37 degrees Celsius. Gurupreet’s mother went to fetch some water in the middle of the journey, leaving the girl with another family. However, they never found each other again. US border patrol agents later found the remains of the girl. 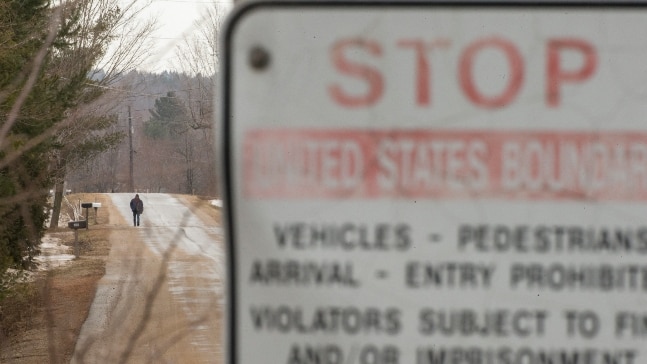 2019 and 2018 figures of illegal immigration from the US southern border show that after immigrants from Latin America, Indians were the second-highest detainees.

Incidents of illegally crossing through ships are also common at the US-Mexico border. In May last year, four people were killed when their boat capsized while trying to reach the US coast from Mexico near San Diego. The boat was crowded, and like the recent Canadian incident, was also without adequate safety equipment.