Pitting Friday prayers at the precinct against Shiva worship is an attempt to fracture a shared heritage.

The Taj Mahal, with all its beauty, grandeur, historical significance and cultural importance, has flummoxed the Hindu right-wing, throwing it into complete disarray over how to adjust to the existence of this marvellous piece of architecture commissioned by a Mughal emperor.

Having embarrassed itself squarely by debating the importance of Taj Mahal, the Akhil Bhartiya Itihaas Sankalan Samiti (ABISS) - the history wing of the Rashtriya Swayamsevak Sangh - is now demanding that Friday prayers within the monument's premises be banned.

"Taj is a national heritage, why allow Muslims to use it as a religious site? Permission to perform namaz at Agra's Taj Mahal should be withdrawn," ABISS secretary Balmukund Pandey told India Today.

In a bid to further a political agenda that feeds off polarisation, Pandey has demanded that if namaaz is allowed at the site, Hindus too must be able to offer prayers to their deity, Shiva. His argument is premised on the ground that there is evidence to prove that Taj Mahal was once a Shiva Temple constructed by a Hindu king. He has gone on to say that Taj is not a symbol of love because emperor Shah Jahan married within four months of his queen Mumtaz Mahal's demise. Pandey's arguments could have been dismissed as outrageously funny if the engines of hate at work behind the statement hadn't been so terrifyingly dangerous.

We wouldn't have really heard of any Hindu, whose representative the likes of Pandey claim to be, make such a demand. For long, the Hindus and Muslims of Agra have crafted a way to peaceful co-existence that works to the mutual benefit of both communities. The Taj Mahal is what brings the two communities together. Those who have visited the monument know how the tourism generated by Taj Mahal is treasured by groups cutting across religious divide in Agra.

In fact, Taj Mahal has ensured Agra has — over the centuries — risen above religious divide, if any. 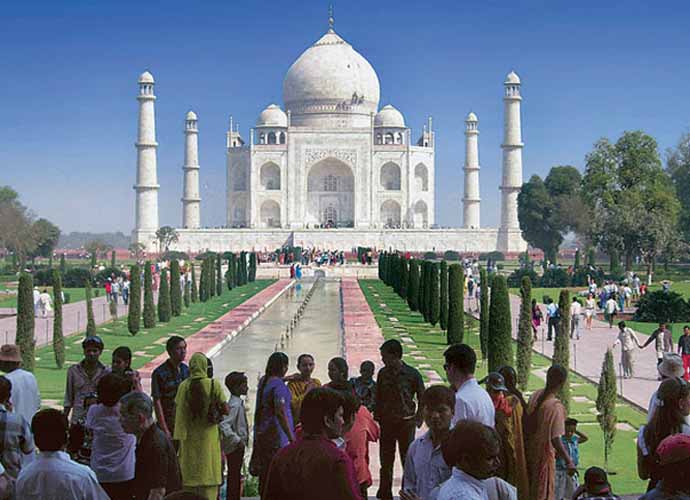 Quite obviously, this culture of solidarity, which has taken hundreds of years to take shape, is seen as a formidable threat by the traders of hate.

Pandey has claimed ABISS is collecting evidence to back the claim that Taj Mahal was built over a Shiva temple and that the evidence will be put in public domain soon. This statement does not augur well for the peace of Uttar Pradesh at large and Agra in particular. The right-wing is shamelessly and brazenly trying to pit the two communities against each other — tragically and ironically — using a symbol of love that has brought glory to India merely with its existence since 1648.

Friday prayers have, for long, been offered at the Taj Mahal premises — and nobody has had a problem with the practice. Citizens of Agra have never fought over where they should be offering their prayers.

When BJP leader Vinay Katiyar said that Taj Mahal should be renamed as Taj Mandir or Tejo Mahalaya, those with even a little sense of historical facts laughed it off. When chief minister Yogi Adityanath said Taj Mahal did not represent India's culture, the statement was dismissed for being born out of nothing but ignorance; when BJP MLA Sangeet Som called the Taj Mahal a blot on the nation, we were offended. But it is high time we are enraged.

Nobody has the right to insult the collective intelligence of this country, to tear to pieces our shared cultural heritage and our national ethos by the virtue of having the backing of the party in power or being in power. The hatred that Pandey and his ilk are fanning must be nipped in the bud.

Let's say a silent prayer — from wherever we are — that good sense prevail over religious bigots and political opportunists for whom our beliefs are just tools to manipulate citizens for nothing but votes.