Guess who's won the #TenYearChallenge: It's Rahul Gandhi, hands down!

From 'Pappu' to 'Param Pujya', Rahul has actually ridden the arc of the last ten years — and come out on top.

There’s lesser value if you are young and vibrant. The more you age, the finer you become.

So, unlike the #10yearchallenge where people are flaunting how they have actually remained ageless in the past 10 years, our politicians should actually show how fine their politics has become.

And, hands down, there will be no competition.

Rahul Gandhi will have a clean sweep. 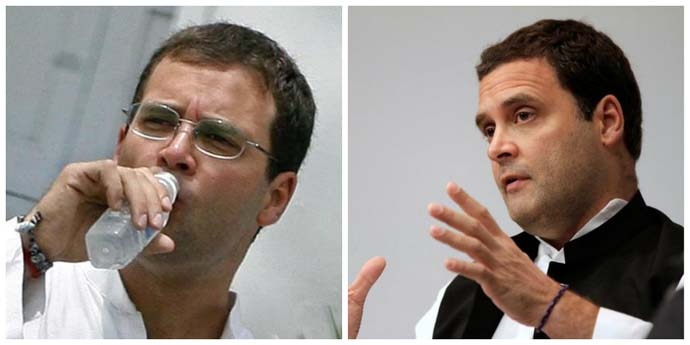 1. ‘Reluctant prince’ to a seasoned politician

Exactly two years after Rahul Gandhi — referred to as a ‘Nehru-Gandhi scion’ and a 'suave youth leader' — became the general secretary of the Congress party.

There was speculation about whether 2009 would be the year of the ‘once-reluctant’ 38-year-old Rahul Gandhi.

Veteran politicians inside the party coming out in support of Rahul Gandhi as the face of the party were termed ‘sycophants’ in 2009.

2. From 'third pole' to the Polestar/poll-star

Be it the Lok Sabha Elections of 2009, or the state Assembly elections preceding that, Rahul Gandhi was the ‘third pole’ in the Congress's victory; the first two being Sonia Gandhi and Manmohan Singh.

2019 could be a watershed moment in this particular #10YearChallenge.

The latest victories in the Hindi heartland states of Madhya Pradesh, Chhattisgarh and Rajasthan, just a year after he became the president of the Congress, have proved Rahul is not second or third to anyone in the party.

He is the party. 40 winks later: He's turned the tables and how!

Parliament is a funny place indeed. Rahul Gandhi added to the fun quotient by taking a nap now and then. Of course, he was not the only politician who has been spotted doing weird things in the House.

But Rahul Gandhi’s 40 winks became the favourite butt of boisterous banter, much after 2009 as well; the point was — when serious issues were being discussed in the House, he was sleeping.

In 2018, he made his wink viral as he hugged PM Modi in the Lok Sabha, embraced his BJP-given nickname ‘Pappu’ by saying with steely cordiality, 'Aap ke liye mein Pappu hoon' — and sent a message that he has arrived.

He may end up with a series of gaffes, but now, you have to engage with him.

There’s a long story why Rahul Gandhi was called 'Pappu' ever. According to some, it was during the BJP campaign ahead of the 2014 Lok Sabha elections when the name emerged. It reportedly derived its existence and popularity from Rahul Gandhi's series of gaffes, or actual thoughts, like 'poverty is a state of mind', confusing 'Indira canteen' as 'Amma canteen', displaying some confusion between 'bhrashtachar' and 'balatkar', calling 'MNREGA' 'NREGA', etc. The list, of real and purported goofs, is pretty long.

His address at the 2007 Congress plenary session was called 'unimpressive'

And there’s another school of thought too that suggests veteran Congress leaders started calling Rahul 'Pappu' (not in a derogatory sense), just as they used to reportedly once call Indira Gandhi a ‘Gungi Gudiya’.

Can it get more definitive?

From zero presence to sharp comebacks: There was a time when Rahul's Twitter handle was OfficeOfRG. That time is gone.

5. From trashing Ordinance to 'Sabka Saath'

So, there was a time (2013) when Rahul Gandhi trashed his government's ordinance, saying: 'I will tell you what my opinion on the ordinance is. It's complete nonsense. It should be torn up and thrown away. This is my personal opinion.'

The ordinance in question — to save convicted MLAs from disqualification — was being brought in by the Manmohan Singh UPA-II government. But Rahul's strong outburst, while PM Singh was away abroad, was an embarrassment to the government.

'My Opinion' versus 'Sabka Saath': What 10 years can teach you in politics! (Picture: DailyO imaging)

But today, a Rahul who knows when the Congress should make a non-Congressman a CM and manages huge coalition clubs on stages together, has clearly learnt how to strike a balance — and how to pose with it!

He's come a long way. And won the #10yearchallenge hands down.

#Rahul gandhi jokes, #Congress, #10yearchallenge, #Rahul Gandhi
The views and opinions expressed in this article are those of the authors and do not necessarily reflect the official policy or position of DailyO.in or the India Today Group. The writers are solely responsible for any claims arising out of the contents of this article.