The non-human characters, like the flood, paddy fields, and the natural landscape are almost as important as the people in the movie.

There is a little girl, in a little village, and a big flood comes.

In the evocative Village Rockstar, we meet Dhunu, her mother and her band of friends. Dhunu, apart from being her mother’s daughter, could also be a child of nature. Primarily seen through her eyes, we meet non-human characters that are almost as important as the people — the flood, paddy fields, and the natural landscape. 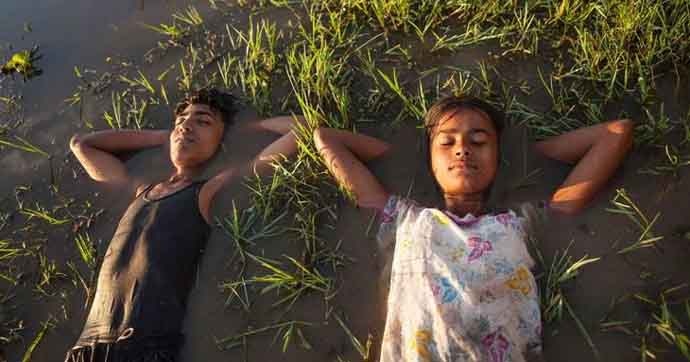 Under the sky, over the paddy fields: A flood of emotions. (Credit: YouTube screengrab)

Have you felt time drowsily stop when you lay on grass in childhood? Or that the entire world was a tree, if you sat under a tree? That tree could be small in relation to the world, but it was large in the way it ensconced one’s self, immense in its scope of triggering thoughts and building stories.

Moments like these abound in Village Rockstar, India’s official foreign language film entry in the Oscars.

The children lie in the water in paddy fields, thumbs on their ears to stop water from getting in. They recline atop trees, stationary and meditative as koala bears. Time seems to stand still even as the rural landscape seems to stretch on forever. Like the craggy British moors in Emily Bronte’s Wuthering Heights, this village seems to be the only place on earth, becoming an irrevocable part of the people.

Then the flood comes.

The children row a slender boat through the inundated landscape they know so intimately. Suddenly, the familiar looks unknown. Water covers everything like a virus. Houses get vacated, the bridge gets eaten by the water, the embankment starts looking weak. We are told Dhunu’s father was taken by the floods because there was no embankment.

Are our little humans, and their big dreams, going to survive?

“Ban the flood!” the kids cry out in one scene — no doubt mimicking the Assam of bandhs and protests.

Amid the cries of bandhs and protests, a plea to ban the floods. (Credit: YouTube/Screengrab)

But in many ways, the spirit of the protagonists mimics nature. There is an inevitability to the annual flood, but we see there is also an inevitability to Dhunu’s joie de vivre. The rains are wilful, but so are Dhunu and her mother. Nature, and natural disaster are a pivot.

Floods have been seen in many different ways in India. The Kosi river is called the river of sorrow because it floods each year; Assam this year had manmade floods because of an unannounced water discharge from Doyang dam in Nagaland, and Kerala is trying to overcome its massive flood with a new campaign calling tourists back to the state.

For Dhunu and her mother, accepting and surmounting the floods, and the sparseness of life in a semi-wilderness, is crucial to their character growth. The mother calls her devotion to her work — flood-ruined though it is — her religion. While the rain lashes at the village, pooling stickily and threatening to drown dreams, it creates character that’s not easily damaged.

It is also the fulcrum to one of the most important themes in the movie — that of a quiet, dignified and unflinching feminism.

Living, loving and surviving the beauty and brutality of nature. (Credit: YouTube/Screengrab)

Village Rockstar shows us an India we don’t often get to see. It shows us ecosystem people — living, loving and surviving the beauty and brutality of nature, in unforgettable shots, and a languorous pace that steals up on you. A bit like the seasons themselves.

It is the resilience and triumph of the human spirit that is the strength of this remarkable film. And its close-up of disaster and nature, told with no fuss, with the camera on the level of the green and gold fields, dipped in the wet mud, expertly capturing courage, that engenders the movie with a unique sense of place.

Dhunu could have only been of this little-known place, with her dreaming eyes and dirty knees.

And the landscape and biodiversity of Assam situates the movie with an unforgettable and firm basis. Unlike so many identical-looking movies that India churns out, with its studio-made Chandni Chowks and synthetic rose gardens, it is ultimately the coming together of nature and culture that makes this a truly regional, truly personal film.

Village Rockstar shows us an India we don’t often get to see. (Credit: YouTube/Screengrab)

And it may well make Village Rockstar just the right ‘foreign film’ for a Western Academy Award audience.

Also read: 7 reasons Meghalaya is much more than rain and nature

#Nature, #Floods, #Assam, #Village rockstars
The views and opinions expressed in this article are those of the authors and do not necessarily reflect the official policy or position of DailyO.in or the India Today Group. The writers are solely responsible for any claims arising out of the contents of this article.