Presenting an exclusive excerpt from Brigadier Mahendra Singh Jodha's book The Story of the Jodhpur Lancers 1885-1952 (Niyogi Books) which offers the heroic exploits, epic victories and magnificent gallantry displayed by the army of the erstwhile State of Jodhpur. On the night of July 13/14, the Jodhpur Lancers moved from divisional reserve into the portion which included the bridgeheads of Mahadat, Hajla and Henu on the River Jordan, relieving Brigadier-General Godwin’s 10 Cavalry Brigade. At 11:58pm on the July 13, telephone instructions were received from the division to push forward patrols and ascertain if the enemy were occupying their usual positions.

For this purpose, the bridges were thrown from 03:00am to 03:30am on the 14, and 'A’ Squadron of Jodhpur under Captain Panai Singh and Major Reynolds as SSO, crossed at Henu and another Squadron of Mysore Lancers crossed Hajla bridgehead. In the early hours of the morning ‘A’ Squadron of Jodhpur Lancers, after crossing Sangsters Ford of the Wadi El Rameh, was reconnoitering forward when it made contact with the enemy.

This squadron of Jodhpur Lancers kept working around the enemy’s flank, but it could not leave the crossings over Wadi El Rameh unguarded. The enemy appeared to be about 300 strong at 1,200 yards south of Wadi Rameh and was shelling the crossings and rear areas with four camel guns (77mm) and two 4.2-inch guns. A Jodhpur Lancers patrol in action at Linghem, France 28 July 1915. They carried a lance (10 to 12 feet long with a bamboo shaft), sword and rifle. (Photo courtesy: Mehrangarh Museum Trust)

In order to clear up the situation, orders were issued to Captain Anop Singh of ‘D’ Squadron and Risaldar Shaitan Singh ‘C’ Squadron through Major Gell to cross over and envelop the enemy’s southern flank and secure the approaches to Wadi Rameh towards the Dead Sea with the Mysore Lancers and Sherwood Rangers on their left.

At 12:10hrs a combined charge was to be carried out on a given signal. The Jodhpur Lancers charged with 125 men (five troops) and Mysore Lancers charged with six troops (also about 125 men). The Mysore Lancers and Sherwood Rangers advanced, at the same time being ably supported by the two squadrons of the Jodhpur and Hyderabad machine gun section which did great damage to the enemy.

The advance of the Jodhpur Lancers, less two squadrons, was made in line of troop columns with the troop of Jemadar Khang Singh as advanced guard up the Wadi Jorfe. On reaching open ground, deployment was made in echelon in extended troops, and the high ground in front was galloped. On reaching here the two squadrons right shouldered and galloped down the left bank of the Wadi Rameh where they rallied.

Here the toughest fight took place and many individual fine acts took place and much of the enemy was killed and captured and the machine gun section with the help of Hotchkiss guns did great execution. Jemadar Assu Singh and Jemadar Khang Singh seeing a force of the enemy trying to escape charged them with their troops without hesitation. 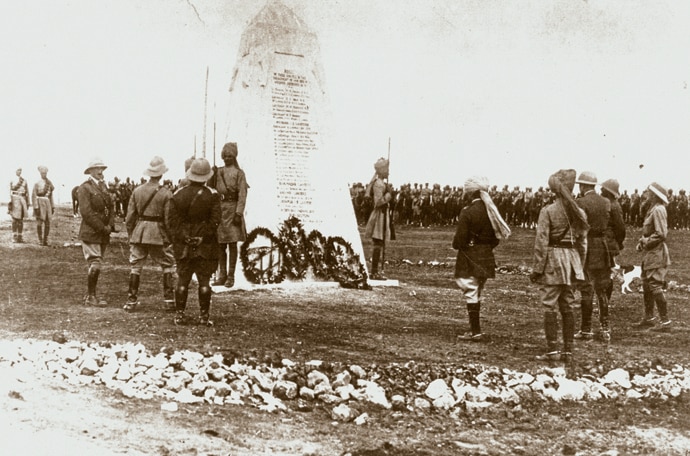 This force of the enemy turned out to be about two Turkish Squadrons and some Germans also, and the whole of Jemadar Assu Singh’s troop were killed, fighting to the last except two men who escaped — both wounded. Both Jemadar Assu Singh and Jemadar Khang Singh were killed. They accounted for a number of the enemy though. Rissaldar Shaitan Singh also attacked a big force of the enemy, estimated at about 50 strong. The Rissaldar killed 4 men and captured 14 prisoners. The Rissaldar and both Jemadars were awarded the Indian Order of Merit (IOM).

Major Dalpat Singh accompanied only by his Trumpet Major Sher Singh, went full-tilt for an enemy machine gun — killing the gunners and capturing the gun. He also captured the Commandant of the 11 Turkish Regiment during the action. Major Dalpat Singh and Trumpet Major Sher Singh were awarded a Military Cross (MC) and an IOM respectively. Major Gell, seeing his Machine gun section Daffadar lying under his (dead) horse, unable to get up and three Turks were closing on him to despatch him, galloped up and despatched all three Turks, winning a Distinguished Service Order (DSO) for himself.

The enemy retreated hurriedly to their original position in the foothill caves of Wadi Rameh, the Hyderabad Lancers following them up and remaining in touch until 07:30pm when they withdrew into reserve west of the Jordan. Jodhpur Lancers and Mysore Lancers each then kept three squadrons across the river to picket the enemy. The action is summarised in the War Diary of the Jodhpur Lancers:

“According to the Prisoner’s statements the enemy brought against the Brigade three cavalry regiments (the 9 and 11 Cavalry Regiments of Turks, each 500 strong with the 7 Cavalry Regiment in the reserve) and a machine gun company (of 80 men and eight machine guns).

The Commanding Officer, the four squadron commanders, and the adjutant of the 11 Cavalry Regiment were captured. It is estimated that at least 100 of the enemy were killed while 54 wounded and 20 unwounded prisoners and 4 machine guns, 51 captured horses and large quantities of rifle ammunition were left in our hands. Every officer and man who came back out of the fight had blood on his sword or lance, while many used their pistols freely.”