According to reports, eight out of 10 people in India experienced online harassment.

Actor Taapsee Pannu was slut-shamed for a photo she posted on Instagram on November 18, 2017. Nothing surprising about it as cases of celebrities getting trolled on social media have risen in the absence of any watchdog. But this incident met a different end as the issue was picked up by Troll Police, a one-of-its-kind show, aimed at stopping cyberbullying, body-shaming and slut-shaming. The duo, the actor and her troll, were brought for a face-to-face interaction after a dramatic prologue. Later, the abuser apologised to the Pink actor.

How the abuser was tracked

The production team, as told by host Rannvijay Singh, comprises cyber security experts and private investigators. The team zeroed in on a specific abuser who commented on many of Taapsee’s photos on Instagram. Ashish Mishra, the troll, who is pursuing BCA in Lucknow, had slammed Taapsee for inappropriate clothing. He was tracked through his digital footprint, which in cyber parlance refers to the marks one leaves on social platforms. The team convinced him to take part in a youth programme on the channel in which he was supposed to talk about the power of social media, its uses and abuses. It was planned that during the discussion a celebrity would be invited to share his or her personal experience about online trolling and it was Taapsee Pannu, the victim, in this case. 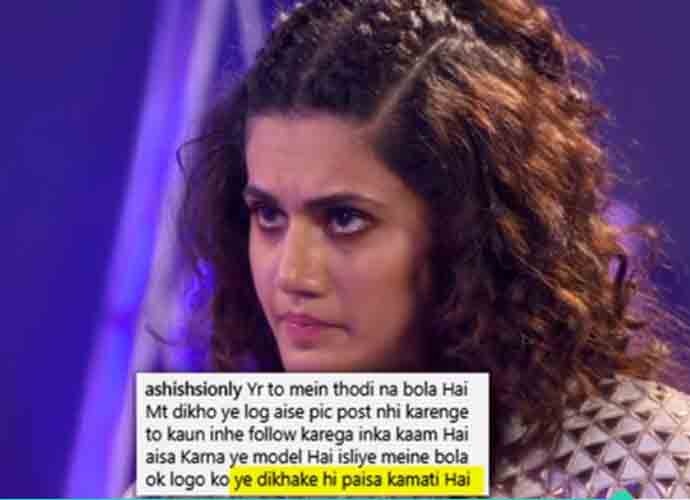 The comments of the abuser are being read out (Photo: Screengrab)

How real is Troll Police?

“This show is inspired by real events that have been dramatised and actors used to establish the story,” the disclaimer of the show reads. While the youth show, with three speakers, including the troll, was a dramatisation, the rest of it came across as real as the comments of the troll are still there on the photos of the actor. The disclaimer of the show (Source: Screengrab)

On being asked about people who question celebrities on social media for their wardrobe choices, like Priyanka Chopra was trolled for her knee-length dress which she wore for a meeting with Prime Minister Narendra Modi, Ashish said that such issues should not bother the younger generation. Orthodox people might raise an objection. After Taapsee joined the discussion, he didn’t betray any sign of nervousness. It was only after he was asked the name of his Instagram handle that he started fumbling. Initially, he denied having trolled Taapsee. After his comments were read out, he said that those comments were not meant for the actor, but another girl, who was also commenting on that particular photo. Then he was explained that those comments were equally inappropriate even if they were meant for some other women. At the end, he apologised and said he would deactivate all his social media accounts. Taapsee advised him not to deactivate the accounts but use them to campaign against online trolling.

The show also invited viewers to report their experience of online harassment on Twitter using #Trollpolicehelpline and the social media platform is flooded with complaints.

Hi Iam Arisha Kausar From Patna Bihar.from 3 months one of my close relatives son and his girlfriend is humiliating me on instagram and facebook they are commenting on my pictures and my family #TrollPoliceHelpline @MTVIndia

Great show , but what to do when celebrities trolls follower by quoting tweet and  inStigate his fan Army to troll? Like tarekfateh who call every Muslim jihadi who is not supporting his view. Plz dm me form I ll help #TrollPoliceHelpline

@MTVIndia First of all thanks to MTVIndia for starting this show. After this show troll on girls will be go down or stop and the people who do this type of bad things that unnecessary troll on girls,writes bad comments etc. will thought 100 times. #Trollpolicehelpline

Hi Iam Arisha Kausar From Patna Bihar.from 3 months one of my close relatives son and his girlfriend is humiliating me on instagram and facebook they are commenting on my pictures and my family #TrollPoliceHelpline @MTVIndia

These platforms have started bringing such occurrences to notice. But issues like whether any action is being taken against such trolls or how fake accounts are being traced remain unanswered. According to a report, eight out of 10 people in India have experienced some form of online harassment, abuses and insults forming the major part of it.

Also read: Aadhaar face authentication: Are we going to be a total surveillance state like China?