Voices from Beyond: Does a mummy’s curse haunt the Indian Museum?

Everyone who handled artefacts belonging to King Tut's tomb died under mysterious circumstances. The Indian Museum in Kolkata has a small Egyptian collection.

“Death shall come on swift wings to him who disturbs the peace of the King.”

So it was believed to have been written in an inscription at the entrance of Tutankhamun’s tomb.

They say the spirit watches from beyond the grave — that desecration can bring death and vengeance.

And nowhere is this better known than the curse of the Egyptian pharaohs. 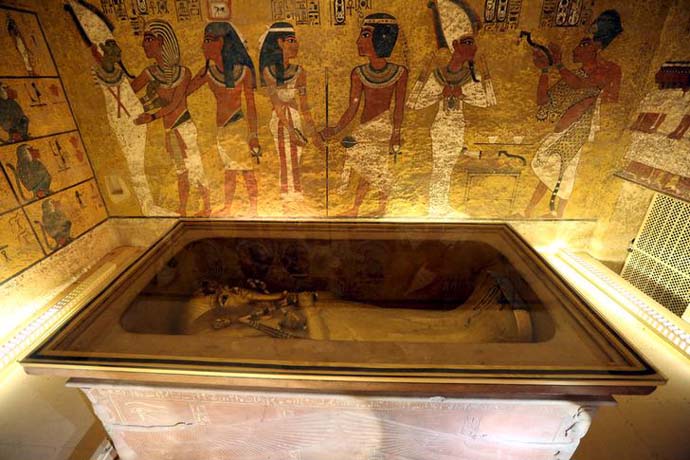 Is there really something called a 'curse'? Does it really work? (Photo: Reuters)

As Tutankhamun’s exhibition rolls into its second month in Paris, before the magnificent collection returns to Cairo, one does wonder about mummies, curses and vengeance from the afterlife.

Following the deadly prophecy which guarded the entrance to the tomb, it was an eerie coincidence when Lord Carnarvon, the financial backer of the excavation, died on April 5, 1923 —  just a few weeks after the discovery. The cause turned out to be an infected mosquito bite on his cheek.

The strange part was that when an autopsy was performed on the pharaoh's body, a similar lesion was found on his cheek.

Also, when Carnarvon died, all of the lights in Cairo (where he was in a hospital) were rumoured to have suddenly blacked out. At almost the same moment, his pet dog in England reportedly died.

Howard Carter (a British archaeologist and Egyptologist who became world-famous after discovering the intact tomb of the 18th Dynasty Pharaoh, Tutankhamun) was not exempt from the effects. The very day the tomb was opened, a giant cobra slithered into his room and swallowed up his pet canary — this was taken to be a sign from the tomb because the cobra dominated many of the newly seen artefacts.

In 1972, some of the artefacts from King Tut’s tomb were sent to the British Museum to commemorate the 50th anniversary of the tomb's discovery. Dr Gamal Mehrez, the director of antiquities at the museum in Cairo, died the night after he handled the artefacts that were to be sent to England. Then, many aboard the aircraft that was carrying the artefacts to London fell victim as well with three of the men on the aircraft suffering heart attacks after coming into contact with these objects.

But can curses endure? Do they work?

Would they extend to the world of the living? Why is the Indian Museum in Kolkata a breeding ground of so many ghost stories? (Photo: PTI)

I was at the Indian Museum in Kolkata a few days ago. There is a small Egyptian collection housed in a small room on the first floor. The damp swells through parts of the exposed walls. Glass cases cover the walls. Some have maps and plaques, a few shabtis and canopic jars lie within.

Dust and grime coat everything.

The air-conditioning whirrs ineffectually, blowing in more of the humid city air. The labels and provenance of the objects are mostly missing, except for a one-word tag here or there. It is easy to see how once set up many years ago, the administration has left this room to run on its own steam.

The strange thing is the darkness which swathes the middle of the room and covers the long glass case there.

Within lies the form of a mummy.

Small dishes of some granular chemical are shoved under the brown bandage-covered skeletal form.

Moisture has seeped in and dark patches dot the bandages. The skull is exposed and yellowed teeth protrude from the joints of the jaw. The wrappings which bind the body carry a miasma of decay and sadness. It is evident that the administration has let go of maintenance and does nothing to preserve such a prized possession.

The whole mummified form lies in a dark swathe of grey shadow — except for the white-painted wooden mask placed on the chest. Dark-painted eyes still gaze vividly from it. A pointed chin defines the expression. There are shock, horror — anger.

The mummy was gifted to the Asiatic Society of Bengal which founded the museum by Lieutenant EC Archbold of the Bengal Light Cavalry in 1834.

The mummy was obtained from a royal tomb at Gourvah on the west bank of the Nile —  but the native crew on board the ship refused to carry it.

Finally, Archbold requested an officer travelling on the Sloop of War Coote to take it to Bombay from where it would be forwarded to Calcutta. Altogether, it took more than 40 years for the mummy to reach Bengal. 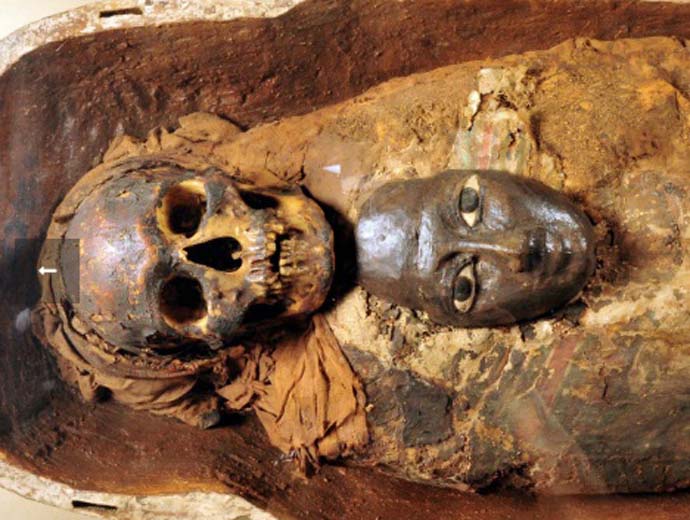 Step inside the room and you can feel the anger in the air. (Photo: Indian Museum)

That day, I stood next to it, and as I watched the face, waves of anguish and terrible anger rolled off it — spreading an unpleasant heat in the room.

I stood back a bit to watch others’ reactions.

Soon, a young couple came in. The security guard who also seemed to double up as a helpful guide around the room now and then came up to them, to answer their questions and tell them the mummy was more than 4,000 years old.

The man peered over the glass case and hovered for a moment, before walking off to the glass wall exhibits. Next were two young schoolboys, who entered chattering excitedly, and stopped to look at the mummy. Their talk died away and it was just a few seconds before they too moved away. A young matron with two small children in tow walked all around the room, and looked at the mummy from a distance, but avoided going up to it.

There was angry darkness there, which was reaching out.

Brought so far from its golden sands, here the shell of the once living lay in decay and neglect.

Interestingly, there is a shrivelled mummified hand in one of the glass cases. As is usual with most of the objects, there is no label or provenance given. But old records of the Asiatic Society say it was procured from a tomb near Cairo by the assistant librarian of the society, Dalton. He gifted it to the museum, supposedly in a great hurry. Rumours had been rife at one time of how the hand had been torn off the arm of a noblewoman’s mummy by tomb robbers and they had quickly sold it off to a ‘saab’ there, once ill luck started following them.

Today, a room full of anger and decay lies in the heart of the Indian Museum in Kolkata.

If you enter, you will feel it calling you.

Also Read: Does magic work? These amulets and 'taveez' from ancient times claim so

Post your comment
#Egypt, #Indian museum, #Ghost, #Tutankhamun
The views and opinions expressed in this article are those of the authors and do not necessarily reflect the official policy or position of DailyO.in or the India Today Group. The writers are solely responsible for any claims arising out of the contents of this article.