Among all of Delhi’s vintage restaurants, the United Coffee House (UCH) in Connaught Place has stood out with its art deco interiors, 23-ft-high ceiling, Harry Winston tapestry and the sprawling Viennese chandelier, which, I feared as a child, would fall on my head! No other restaurant in Delhi has had exuded such class — and for so long.

This is the 75th year of UCH, which was opened by Lala Hans Raj Kalra at a spot where there stood a grocery store catering to the families of the men who presided over the steel frame of the British Raj. A manufacturer of country liquor and owner of a classy booze shop in Chandni Chowk, Lala Hans Raj had opened a 24-hour restaurant named Esplanade, in honour of the central promenade of the Old City, in 1938-39.

Esplanade mainly served the American GIs stationed at Red Fort. The restaurant featured live music — the GIs danced the nights away with their Indian girlfriends before heading to the most difficult battlefields in the world in Burma and China -- and it was famous for its hot dogs, crab cakes, chicken in the basket, and buttermilk biscuits in gravy. As it was then said, anyone visiting Delhi in those days could not have imagined that the world was at war.

Pan to the year 1942, when Delhi’s calm was shattered by the Quit India Movement heralded by Mahatma Gandhi, and you have the entrepreneurial Lala Hans Raj zipping across the new Connaught Place, the envy of Delhi, in his Pontiac.

He had been informed that some of the Connaught Place traders were thinking of selling their shops — maybe because of the uncertainty brought about by the Quit India Movement and with India being sucked into American-Japanese hostilities as a result of America and Britain being Allies.

Lala Hans Raj stopped at a grocery store up for sale. Impressed by its high ceiling, he decided to buy the place and open Delhi’s first cafe where people from different walks of life would be united by their love for good food and beverages of all kinds. It was this vision of togetherness that led to the restaurant being named United Coffee House.

Soon, the 3,500sqft cafe became famous for its cheese balls, keema samosa, nargisi koftas and railway mutton curry, and it attracted an eclectic crowd, from artists, journalists and writers, to film stars on premiere nights (Connaught Place, after all, had the two leading cinemas of the city). 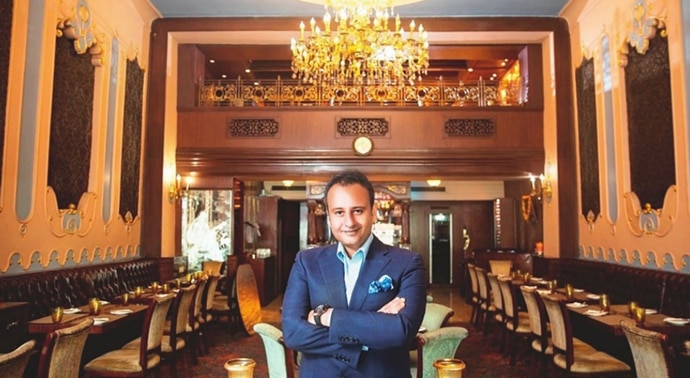 But the most visible among them all were the match-making families — it used to be said at one time that marriages were not made in heaven, but at United Coffee House, over cups of tea made with the United Blend, a 75-year-old legacy created by Lala Hans Raj.

As Akash Kalra, who has been running the restaurant since his father's death at a young age in 1989 (seven years after the passing of Lala Hans Raj in 1982), brought me up-to date on his grandfather’s legacy, he repeatedly emphasised that UCH was the first restaurant to use air-conditioning and deep freezing equipment at a considerable cost in the early 1950s. We now take these technologies for granted, but these were luxuries then. Restaurants still used wall fans; air-conditioning became de rigueur much later.

With the arrival of the 1960s, which saw Akash’s father, Gandharv Kumar, who had gone to Britain for higher studies, take over the reins of his family business, the menu got a distinctively "Continental" thrust. It was Gandharv Kumar who introduced the restaurant's all time classic — Chicken Pepper Steak. Sizzlers at that time were the rage and UCH knew how to serve them in style. It continues to be the only restaurant that gets it consomme unfailingly right and it never goes wrong with its chicken a la Kiev.

Sadly, Gandharv Kumar passed away when Akash, then a student of Modern School, Barakhamba Road, was only 17. His parents had planned for him to go to Salzburg, Austria, to study hospitality management, but he had to report for work at UCH.

Since then, each day for Akash begins with the opening of the restaurants and ends when they shut down. Yet, he has no regrets, for he eats, breathes and lives his business. And he does it single-handed. His biggest reward is that he doesn’t have a PE fund breathing down his neck, nor does he owe any money to any bank.

To keep the legacy going, Akash Kalra has rolled out the United Coffee House Rewind brand at the DLF Mall of India, Noida, Sector 18, and the Cyber Hub in Gurugram. His next stop is Epicuria at the Nehru Place Metro Station, followed by four or five more in as many years so that he can deliver the UCH experience to the old faithfuls scattered across Delhi-NCR and their children and grandchildren. He’s in no tearing hurry to expand, it’s his game and he chooses to play it on his own.