DailyOh! Who sparked violence at US Capitol Hill, to the Indian flag at US protests

Joe Biden has been confirmed US President. Donald Trump has conceded the 'end of the greatest first term ever'.

There is a certain pleasure in seeing your ‘teacher’ go the same way she beat you into learning was not to be taken. You can call it sadistic pleasure, but you can’t take the pleasure out of it. From West Asia to China, millions of people are feeling that pleasure at the sight of violence at and in US Capitol Hill. China has called it a ‘beautiful sight’ because US House Speaker Nancy Pelosi had once called the Hong Kong riots ‘a beautiful sight to behold’. Scores settled but scores are also injured in the violence that hit the Capitol Hill building Wednesday afternoon Washington DC time. Most of us in India were asleep at the time; some of us were struggling to fall asleep when this violence rocked Capitol Hill.

Four people are confirmed dead in the violence - one in police firing - but we, also BJP MP Varun Gandhi, have no confirmation on what the Indian flag was doing at the protest site. 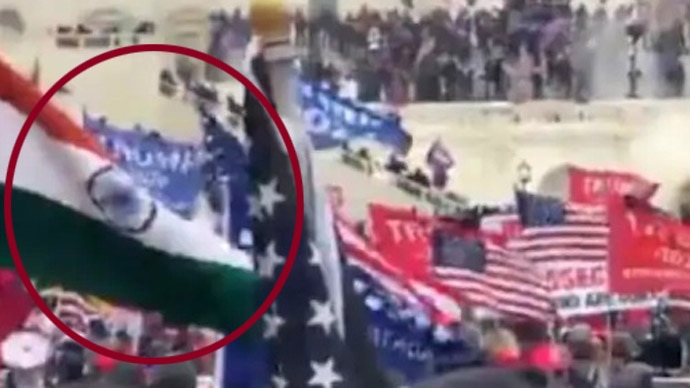 The Indian flag during the protests at US Capitol Hill. (Photo: Twitter)

Why is there an Indian flag there??? This is one fight we definitely don’t need to participate in... pic.twitter.com/1dP2KtgHvf

But we do have a confirmation on how and why the protest began. So, the US Congress was on its way to certify Joe Biden as the President after Donald Trump. Trump supporters gathered outside the US Capitol to protest against the election results. People may not have gathered had Trump not asked them to march to Capitol Hill. The gathering certainly wouldn’t have turned violent had Trump not asked people to ‘express their anger’. To ensure Trump says nothing more, Twitter, Facebook, Instagram, Snapchat have all blocked him. Fearing being blocked, Trump’s daughter Ivanka Trump deleted a tweet in which she had called the rioters ‘American patriots’.

Trump supporter Ashli Babbit, who was killed in police firing, had tweeted hours before the riots that “nothing will stop us”. But then death stops everything.

Since we are talking Capitol Hill, which ain’t no hill but a building, and we are, unfortunately, also talking about death, let us tell you about the death of George Washington and the connection it had to Capitol Hill.

But before that let us tell you that the person who won the prize for the best design for Capitol Hill but never had his design converted into the structure. Thomas Jefferson organised a competition inviting designs with a prize money of US$ 500 for the best design. In the 18th century this was a lot of money. The prize was won by a French architect, but converting his design into a structure was too expensive so a design by William Thornton was taken up.

There was an area in the building called Crypt. At some point, a plan was made that the first US President, George Washington, would be buried in the Crypt. Washington died on December 14, 1799. The US Senate and House passed a resolution that “the family of General Washington be requested to permit his body to be deposited under” a marble monument “erected by the United States in the Capitol, at the city of Washington.” The US Capitol Hill. (Photo: Reuters)

George’s wife Martha was caught in a dilemma because George had told her he wanted to be buried at Mount Vernon. So, she wrote back that while George wanted to be buried at Mount Vernon, she learnt from George “Never to oppose my private wishes to the public will... I cannot, say what a sacrifice of individual feeling I make to a sense of public duty.”

The matter remained in limbo for years and it was finally decided that George’s remains should be where George wanted them to be. The Crypt is now used for National Statuary Hall Collection and to house a gift shop.

We told you how Capitol Hill came into existence and why the body of George Washington was never housed there but where did the word capitol come from? Some may say by misspelling capital.

Capitol, the Word Of The Day, comes from Capitolium. Capitolium was the name given to a temple in Rome dedicated to Jupiter, which once sat on the smallest of Rome’s seven hills, Capitoline Hill.

While capital can mean many things, capitol means just one – a certain type of building. US Capitol Hill is in the capital of the US. Joe Biden’s confirmation was confirmed at the Capitol Hill after the violence. But more importantly, Donald Trump conceded the “end of the greatest first term ever”.

From US, let’s come back to India, also let’s bring back the Indian flag from violent protest sites on our way back. In India, the Indian flag was put on tractors that were part of the peaceful tractor rally against the farm laws. Thousands of people joined the protest to make two demands: repeal of the newly enacted farm laws, and provision of legal guarantee on the minimum support price. So far neither side is in a mood to budge. We will bring to you the update on any mood changes as, if and when they happen. Who will be playing Kisaan soon? Sonu Sood. Kisaan is Sood’s upcoming movie but before the movie comes out, some trouble has come in the way of the man who pulled many out of trouble.

The BMC has sent a written complaint against actor Sood to the Mumbai Police. Making the complaint, BMC has asked MaPoSe to file an FIR against the actor immediately. Sood allegedly converted his residential building into a hotel without taking necessary permission.

We will see if Sood can pull himself out of trouble like he pulled everyone out of problems.

Since we are talking Bollywood, we want to remind you whose birthday it is today – Irrfan. We lost Irrfan on April 29, 2020 due to cancer. Had the actor been alive, he would have turned 54. He isn’t around but his work is. We recommend Angrezi Medium (2020) and if you have the time, we also recommend Hindi Medium (2017). You can watch the first one first or the second before the first. Your life, your choice. Our recommendation.

Having redefined fashion, Paul died in Coimbatore yesterday at the age of 79, after suffering a stroke in December 2020. The brands he created will continue to remind us of him.

US companies reportedly haven’t forgotten about missing Chinese billionaire Jack Ma and are considering a ban on Chinese tech companies operating in the US to build pressure on China to tell where he is.

When China relents, we would let you know.

For now, you can watch the movies we recommended.

Also Read: Why the death of Irrfan is a personal loss for an entire country

#Jack ma, #Donald Trump, #Capitol hill violence, #Capitolhill
The views and opinions expressed in this article are those of the authors and do not necessarily reflect the official policy or position of DailyO.in or the India Today Group. The writers are solely responsible for any claims arising out of the contents of this article.