Don't wait for Vikas. Nip the Dubey in the bud

Uttar Pradesh, and Bihar, need to deny its youth the opportunity to become a Vikas Dubey. The society needs to block the Road to Robinhood.

Vikas Dubey either surrendered or was arrested or was arrested after surrendering to the police. Let us not get into the nitty-gritty of how the police-criminal system works in our country, the fact is the man responsible for killing 8 policemen is in police custody. The gangster is expected to survive the transit to Kanpur. After that, he will obviously be taken to the spot of the encounter that was actually an ambush. That’s his own village, Bikru. Since the dog becomes a tiger in his own gully, Vikas Dubey will try to snatch the service revolver of a policeman on the way back to Kanpur, the policemen will all swing into action and boom! Vikas Dubey killed in police encounter will be the news flash. All this is just speculation like the very believable one that he has coronavirus and the comorbidity called police custody will kill him. His fugitive companion Prabhat tested positive for the coronavirus after being arrested on Wednesday. In police custody, his T-shirt had the slogan Apna Time Aayega. The Bikru gully boy’s time came soon. He was dead by morning in a precision encounter. As did two others, Amar and Bauaa Dubey. For the rest and their ringleader, Vikas Dubey, it’s ticking.

Vikas Dubey, a history-sheeter of Chaubeypur, has apparently killed a number of Brahmins but he is considered a Brahmin hero. Because you see, caste just loves and idolises its strong men. They don’t care about the dead and the weak, they care about who killed. So a Thakur gangster is the pride of the Thakurs and a Yadav bahubali finds love and refuge among his caste men. That’s how it works. When rule of law is bent by the power of politics, the police are often part of the nexus. That policeman tipped off Vikas before the raid on his house on July 2 did not shock anyone. It would have been a surprise if they did not. This has, over the years, become the prevailing culture. Cops depend on politicians for posting and favours, politicians depend on criminals for vote and rent-collection. In this equation, the politician is on the top of the food chain by sheer virtue of having the crime syndicates on his side. That’s why criminals want to remove the middlemen and become politicians themselves. 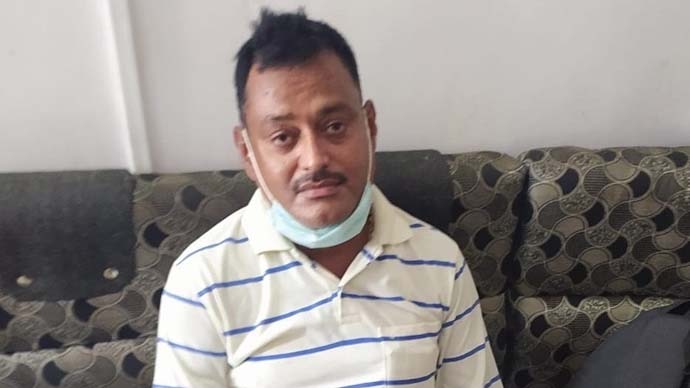 Vikas Dubey, a history-sheeter of Chaubeypur, has apparently killed a number of Brahmins but he is considered a Brahmin hero. (Photo: ANI)

Growing up in the badlands, I often hoped I would become a rangbaaz (gangster) one day. That’s the default thought in many parts of the countryside, in the north at least. Why? Because the most prosperous man was the man with gunmen surrounding him. He could get things done. A child doesn’t recognise the grievances and hatred people hold in their hearts. The child just sees what is seen in his or her surroundings. The man in an open jeep with gun-toting personal security in the back seats is a powerful image. You see people receiving him with folded hands and offering tributes. He is ever-smiling, kind, generous, and just. He delivers justice while the courts delay. You see politicians visiting him and ignoring the actual voters. You occasionally see police landing up and leaving after a cup of tea. And the ultimate, this happened once in front of my eyes, the police leaving with tail between their legs because they were told they could execute the search warrant only after an encounter. The winner shall prevail. With the guns and ammunition on display in front of them, the police band played the beating retreat.

When people wonder why the heartland is trampled by the boots of the bahubalis, they should look at the culture of rangbaazi that has flourished in these parts. Not all criminals or rangbaaz/rangdaar manage to become an MLA or MP, but then not all aspirants manage to crack IAS exams either. As a career choice, you have a chance at becoming the Zilla Parishad chairman if you play your criminal records well. With caste card in combination, the sky is the limit. The respect in the eyes of your own kin for your muscle and the ability to favour your own and take revenge on others' behalf make Robinhoods who inspire many more young men into a life of crime. Some die on the way, some on the climb. Those who climb to the top are super magnets that draw the loose iron from all corners.

The same regions also send boys who shine in different walks of life. Why? Lack of opportunity, maybe. Disabling the default mode, maybe! My parents packed me off to a boarding school. A good school makes a lot of difference. New avenues open up, the horizon broadens, the open jeep loses its romance, the gun its sheen. The world of books and the world beyond the immediate neighbourhood start appearing in your dreams. The little Vikas Dubeys get distracted by the belief that they could be Sundar Pichai or Satya Nadella. Big cities exercise their pull and good parenting can give that gentle push. All this works like a vaccine for the Vikas Dubey virus. More and more children of the heartland are denied, by design, the opportunity of becoming Vikas Dubeys. Only a few hear the calling now but in the two most populous states of India, even the few are too numerous to neglect.

Vikas Dubey may not die in the encounter as imagined in the beginning of this piece. He may well be a free man in months as it happened when he killed a minister-level politician inside a police station in 2001. Or he may be tried and jailed for life and come out a dozen years later, old and frail, to marigold garlands and drumbeats of his supporters. The police demolished Vikas Dubey’s house in an over-reaching act bordering on illegal, yet I found it effective, very effective. Because seeing the edifice of illegitimate power being flattened to the ground would demolish the hopes of many future Vikas Dubeys of Bikru. That his power was not permanent is the right signal to send to anybody nurturing the thought of following in his steps.

Uttar Pradesh, and Bihar, need to deny its youth the opportunity to become Vikas Dubeys. The society needs to block the Road to Robinhood. Else, as soon as a Dubey is off Chaubeypur’s mind, a Bajpayee would rise to fill the vacuum. Individuals die, ideology lives. The ideology of political power by muscle power can only be defeated by paving the way with opportunities other than illegitimate power. Establish the rule of law and enforce it. Don't wait for (another) Vikas.

#Gangster, #Casteism, #Bikru, #Vikasdubey
The views and opinions expressed in this article are those of the authors and do not necessarily reflect the official policy or position of DailyO.in or the India Today Group. The writers are solely responsible for any claims arising out of the contents of this article.