The Saudi prince recently visited Pakistan. And showed them exactly where they belong.

So, in his whistle-stop tour of Pakistan, here are five times Saudi Crown Prince Mohammed bin Salman showed Pakistani PM Imran Khan who his daddy is, and just where chotta, sorry, Naya Pakistan gets off: 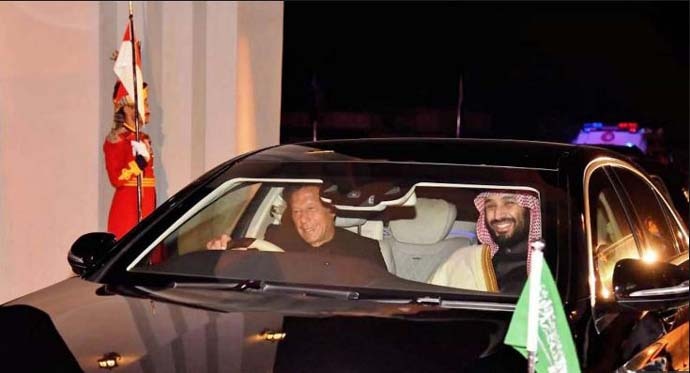 Why not? Isn’t that what Saudis mostly treat Pakistan as? (Photo: Twitter)

So, high-profile international guests like the Saudi crown prince would, of course, be met at the airport upon their arrival by the head of state they were visiting. In such scenarios, a line-up of dignitaries and high-ranking officials waiting to shake hands or present welcoming flowers to the VIP guest, ushered graciously forward by the host, is normal.

What is not normal is the Prime Minister of the country then driving — personally — the honoured VIP guest to their guest quarters.

And why not, nasty critics suggest? After all, isn’t that what Saudis mostly treat Pakistan itself as?

2.). ‘Utho, Mr President!’ The weirdness was only starting though. At an official banquet for Crown Prince Salman, we saw a most peculiar arrangement of flower-pot-like heads assembled in rows, behind stiff placards and satin bunting, eating busily with the accompanying clink of silverware and, of course, the concentrated sound of a hundred Pakistanis chewing chicken.

PM is busy eating, President begins address sitting down, then is told: "kharay hu jaey". They have to be micro managed all the time. pic.twitter.com/59w6Dbf60p

But while Crown Prince MBS nibbled delicately, Pakistani PM Imran Khan was seen eating away with single-minded focus. He didn’t stop even when the President of Pakistan made a welcome speech. Amazingly enough, the President — this is that country’s ultimate head of state, we presume — began his speech seated (the food was obviously alluring) and was then told — mid-word and mid-bite — to get up.

That’s how they treat their President.

Who then shuffled to his feet and read out his speech, all to the accompaniment of Imran Khan chewing away as MBS enigmatically smiled.

3.).  ‘Prime Minister of Pakistan!’ — But then came another crowning glory moment, not for poor ol’ Imran Khan but for Crown Prince Salman, when Im — unkindly called ‘The Dim’ — delivered a giggly speech and claimed that if MBS were to stand for elections in Pakistan today, he would win more votes than Imran himself.

Pak PM ⁦@ImranKhanPTI⁩ tells Saudi crown prince that he (MBS) is SO popular that in a Pak election he wd get more votes than Imran himself. ... pic.twitter.com/CQ1YR7Qkjr

Isn’t that just stating the obvious though, given how vigorous the election process in Pakistan, which apparently ‘selected’ Mr Khan as PM, was, and how, in all likelihood, Pakistan will not be able to afford many more elections unless friendly neighbourhood nations like Saudi give them a hand-out?

And if Saudi pays, why shouldn’t Saudi win?

4.). ‘Kahaani ghar-ghar ki’ – When he became PM of ‘Naya Pakistan’, Imran Khan grandly announced major state residences would be turned into public buildings because, seva me hi meva hai, you know. It was said that even the PM House in Islamabad would be made into a wing of the Islamabad National University. But so much for Immi’s amazing plans — as soon as Crown Prince Salman landed, he was driven — yes, by Imran, personally – to the PM House where, we presume, student lectures and dissection sessions were not in full sway.

Poor Imran Khan — his lovely dream remained that — ek sundar sapna — under the weight of giving the Saudi leader whatever hospitality Pakistan could dish up.

5.). ‘I wanna go home’ — So, after all that aadar-satkaar, Crown Prince Salman delivered an elegantly crushing blow to Pakistani pride. India had made it clear that MBS should please visit India not directly from ‘Terroristan’ but from someplace else. And thus, Pakistan’s dear friend decided to return home — did Imran have to drive him back to the airport, we wonder — and then come to India afresh from Riyadh! So much for the kasme-vaade of full-on frandship forevah et al — or perhaps, Crown Prince MBS himself wanted to shake off lil’ Pakistan’s dust-shust from around him before embarking to a far greater nation.

Something our dear neighbour so lacks.

Post your comment
#Pakistan, #Imran Khan, #Prince mohammed bin salman, #Crown prince
The views and opinions expressed in this article are those of the authors and do not necessarily reflect the official policy or position of DailyO.in or the India Today Group. The writers are solely responsible for any claims arising out of the contents of this article.