A Nice State of Affairs: When you find your ‘happily-married’ man friend on a hook-up app

Open relationships are quite in vogue, I am told these days. And, yet something snaps in me when the word ‘nice’ is used to describe the woman he is ‘cheating on!’

His was the wedding I dreamt of myself. In a small village temple, amidst a meadow of flowers, in full bloom. Warm, intimate, oozing romance — the lost, old-world type, untarnished by the travails of modern living and its likes.

His home in a city, miles away from mine, was one I made it a point to always drop into — a chai, a meal, a night stay. His better half, always smiling, always being helped by my friend in the kitchen — chatting over the dishes, or as he made nighttime chai for us, with the three of us lolling on their wrought iron master bed, as he held her, lightly, always praising her work, as she did his.

Discussing their respective parents — deaths, darknesses, a diary of weddings and baby showers coming up — what to wear, which city was next on their travel calendar, her pursuing a fellowship, him applying for another.

It seemed complete — what they had. 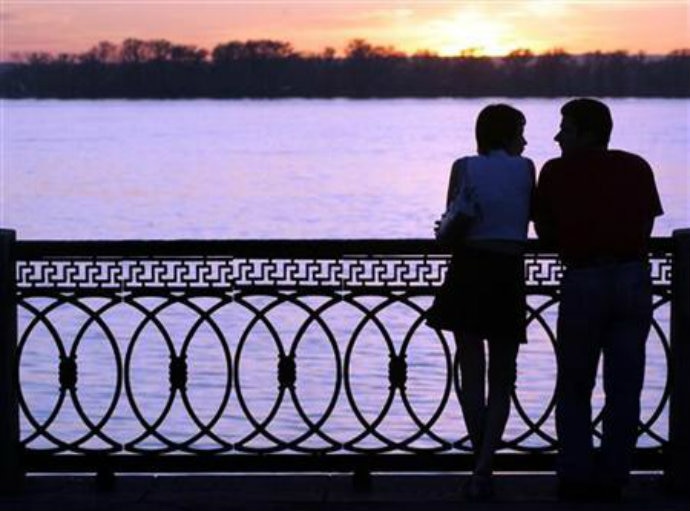 They seemed complete — until I saw the truth. (Source: Reuters)

And, therefore, I was in some kind of shock when Tinder threw up his profile as a match to another common friend who WhatsApp-ed me his photograph, asking if he was the same person. Asking the obvious — if they were still together or had been seeking counselling for marital discord — perhaps, even a divorce.

‘We don’t fight, yaar... just that we are different people now... there is no chemistry anymore...’ he blurts out as I decide to ask him if there is indeed trouble in paradise — his and hers.

Open relationships are the way of the modern world, one hears so very often, and, as I see rampantly being flashed on social media and in my social circles. ‘Most marriages these days are an uneasy compromise, everyone is doing someone,’ is the most common jibe when my girlfriends and I meet up on a midweek drinking binge.

Romance, fidelity, love is plagiarised by technology-enabled, app-driven, no-strings-attached dalliances, where there are no hearts open enough to be broken.

And yet, something very basic seems to be flawed when my friend harps on just one word, ‘nice’ to describe his legally wedded wife — repeating the word ‘nice’ a zillion times over, like it’s some kind of communicable disease — pausing, before adding, ‘she’s super nice…and I would allow her the same license…’

Your libido? The carefully-crafted, prettily picturised lies you project on social media? The liberated, liberal male lingo you espouse? It reminded me of that photograph of them taken on their wedding day... (Source: Reuters)

I wonder why Indian men are always patronising women they are obviously cheating on by heaping praises on them and venerating them to an almost goddess-ish mythic creature, who are just like their mothers — pure, Sati Savitri, looking after bawling babies and nagging in-laws, and yet fail to give them what they seem to need — sexual experimentation. Falling back on the sexual lull in their marital lives as a convenient emotional bait — a ‘victim’ card to flash and flaunt, and perhaps get a right swipe on an online dating app, that has the reputation of being a ‘hookup' platform.

How they love their progeny and also responsibly pay for their wives’ bills, but sexually and emotionally demand variety and vigour!

Here’s what baffles me about the duality of Indian men and their farcical married lives: If these wives are such wondrously ‘nice’ ladies, then why would these men stray — or is it true that most Indian men are polygamous? And if a marriage didn’t involve property, bloodlines, inheritance, family pride and social acceptance, maybe men would actually, much like our Indian gods, take on a twosome — a consort and a concubine.

Also, what’s with men on online dating apps, using profile pictures of their wives and children?

I decide to take on my friend since he’s ‘openly’ out there.

One of the men who sent me an interest flaunted a saffron headband, carrying his infant on his lap, his wife’s arms around him, as she stood beside him, also wearing a saffron headband. Her pregnant paunch, clearly visible.

The truth is, women too aren’t completely off the hook here — there are a lot of women who stray outside the suffocating 'lakshman rekha' of their marriages, indulging in clandestine romps, while deciding not to ‘rock the boat,’ either again for society or for their aging folks who may have splurged lakhs on their big, fat Indian wedding, grown-up kids who will be left red-faced, or, sometimes simply lapping up the monetary advantages of being the quintessential ‘credit card’ wife — possibly coupled with the sheer dread of being single again, that, in this country, is accompanied with its own stereotypes, stigma and slut-shaming.

I have also been a witness to a lot of my female friends who are well placed in their professional spaces and coming from well-to-do families, indulge in unconventional relationships with a married man, knowing fully well that he will never leave his wife. Not that these women expect so much either.

A woman I had once interviewed for my non-fiction on single Indian women last year, Status Single, made it clear that she loved the sex vacations, gifts and emotional bonhomie her married and older lover offered.

She was a divorced lady herself and tired of the wedding tirade. She called her affair ‘a settlement of sorts,’ confessing that every time the man left her bed in swanky Banjara Hills home, she sort of felt like a ‘slut.’ But, then again, what was the option? The truth is, women too aren’t completely off the hook here. (Source: Reuters)

One of my dear women friends, married for over two decades, who herself cheated on her businessman husband to free her physical and emotional self from the boring drudgery and misogynistic control of her spouse, who played to the galleries professionally, but turned into a monster in the darkness of her own home. Discovered by a detective, she took on a prolonged and much-publicised divorce battle, living a separate life, trying to set herself free — only to be dragged back inside the lakshman rekha, thanks to the crores she feared she may be deprived of, and possibly never having her own professional identity.

‘It’s at least more peaceful,’ she sighed when we last spoke and I expressed my concerns at her crawling back inside his sharp clutches.

The way another of my old friends from the city of my birth, who fell in love with a younger man she met on a work trip, keeps justifying her marriage as safe — there is no abuse, not the kinds we women fear the most, no one hitting you, or raping you on your own bed — and yet being so vacuous inside, that you have developed a vocabulary for the uneasy compromise.

Your parents? Again? Another second shaadi website? The scorn and jibes of half a dozen relatives? Curious colleagues? Astrologers, again?

‘Will you be okay if she were to be on Tinder? Like you? Discuss her lovers unabashedly?’ I finally asked my friend, after he went on to elucidate how being 'open' was the new marital code of conduct.

There is a confused silence.

"I haven’t stopped her…and neither have I fitted spycams, at home… she travels a lot…brings home women…’ he ran out of breath.

My thoughts raced to a time when a Tinder match had led me into a conversation with a top Delhi-based advertising honcho, in Kolkata to shoot an ad commercial. He kept sending me pictures of his swish marble bathtub till I called him asking why he was bombarding my WhatsApp.

‘I am in a relationship,’ admitted the divorced, single father, adding sheepishly, ‘My girlfriend and I love threesomes... that’s our kink, voyeurism... would you like to join us?’ I blocked him at once.

There was no polite way of saying no.

Was there a polite way of saying yes, I asked myself?

Or was this sexual frolicking the grim truth of Indian marriages — most still arranged or negotiated between large families?

Where producing children was the end target so as to continue the bloodline. Where playing safe meant being ‘nice’ to each other. And mainly to our parents and their ilks. To distant gods and family astrologers and men who predicted our fortunes or had declared us a Manglik.

To a whole system of marital bliss which was projected and protected by Bollywood and elaborate mehendi functions, choreographed dance sequences, long swishing gowns and fake eyelashes, which reduced the oldest socio-political institution in this world to a long-standing tamasha — free khana-peena and shaadi-wale tasveer for a bunch of excited relatives who had made a career and a killing on wedding tourism.

Where ‘nice’ was just that.

A man who flaunts his marital happiness like a sunny picture postcard. Who writes long posts on social media on the state of politics and indulges in Modi-bashing when news of the PM’s once-upon-a-time wife is leaked online.

Falling short of a whisper.

Also read: Kalank Movie Review: ‘It's bombastic, bizarre and Bhansali-lite. But 'Kalank' does touch your heart!’