Air assets do not come cheap, but it is a price that the nation must be willing to pay for safeguarding its sovereignty.

Lost in the din of public discourse about the depleting squadron strength of the Indian Air Force is the equally dire need of combat enablers, without which the IAF would be severely handicapped in bringing force to bear in an optimal manner.

While a Flight Refuelling Aircraft (FRA) enhances strike ranges of fighters, an Airborne Warning and Control System (AWACS) platform creates a composite air picture by fusing the radar pictures from all ground- and air-based radars with its own.

This composite air picture, along with feeds from onboard communication and electronic sensors, is used by the AWACS to direct own strikes against the adversary as also control own fighters to intercept his incoming raids.

India’s AWACS programme started in the 1980s, when an Avro transport aircraft was used as a technology demonstrator test bed for development of an indigenous system. After many flight tests, spread agonisingly over a decade, a prototype crashed on January 11, 1999, killing all eight on board; with this ended India’s brief tryst with an indigenous early warning system till the phased array balance beam Embraer145-mounted AEW&C programme started in the beginning of this century. 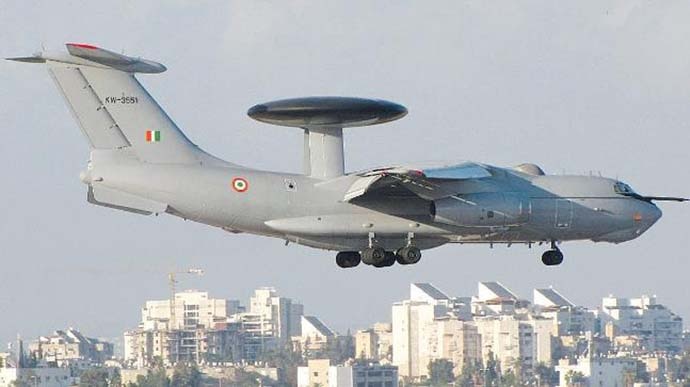 In the interim, the Israeli-built Phalcon system on an IL-76 was bought, with the three contracted aircraft arriving between 2009 and 2011.

The Embraer AEW&C aircraft has also been inducted with an Initial Operational Clearance certificate only — implying that certain operational parameters are yet to be achieved.

The IAF, thus, has only three Phalcon AWACS and one AEW&C system (with the second due to be delivered this year). This is inadequate considering the security threat from Pakistan and China. China has developed its own IL-76-based KJ-2000 AWACS, of which it reportedly has four. Additionally, it has developed the KJ-200 (around 11) and KJ-500 AEW systems (around 15, including those with PLAN) based on Y-8 and Y-9 transport airframes respectively.

The KJ-500 uses the better Y-9 turbo-prop that is bigger and has greater range than the Y-8 based ZDK-03 exported to Pakistan. Pakistan has four ZDK-03 and four Saab Erieye 2000 balance beam AEW&C aircraft. How do the capabilities of the AWACS of the three air forces measure up?

The Indian Phalcon radar system is way superior in performance to the Chinese KJ-2000. The aircraft platform is also better since the IAF’s IL-76 is powered by PS-90 aero engines that are more powerful and fuel-efficient than PLAAF’s D-30 powered IL-76 based KJ-2000.

Since both are AWACS, they are capable of data fusion from different airborne and ground-based sensors to form a composite picture of the airspace being scanned. Pakistan does not have any comparable system, though availability of limited data fusion may be inherent in its holdings.

The performance of AEW&C aircraft is not available, but considering that turbo-prop aircraft generally cruise between 20,000 and 25,000 feet, the use of KJ-200 and KJ-500 by PLAAF over the Tibetan plateau would be sub-optimal; however, one was reportedly seen in satellite photos at Lhasa during the Doklam crisis.

Thus, it would be the IL-76-based platforms of the IAF and PLAAF that would be directing the air battle, if it comes to war. On the India-Pakistan frontier, the basing of the Saab Erieye system at Kamra and the ZDK-03 at Karachi perhaps are indicative of the relative quality of their capabilities — up north, the hilly terrain would require more sophisticated processing (of the Erieye?) to eliminate ground clutter while detecting low flying aircraft than in the flat desert and maritime Rajasthan and Gujarat borders.

This is for the present, but how does the future stack up?

The IAF wants two more Phalcon-equipped IL-76 AWACS, but high costs have not seen the programme go through for many years.

The DRDO is hoping to purchase three Airbus-330 as base aircraft for its AWACS (India) programme to mount a new underdevelopment active phased array radar; this too is on hold for want of governmental clearance. Meanwhile, China’s lack of IL-76 airframes for more AWACS would soon be overcome as its Y-20 very heavy transport aircraft has entered squadron service; with the more powerful WS-20 indigenous engine soon to be certified, the Y-20 would become the mount for its AWACS which should start entering PLAAF in a decade’s time. Pakistan, on the other hand, would continue to bank on its all weather friend and fulfil its needs through Beijing.

There is, thus, a window of around 10 years within which urgent decisions need to be taken to procure more AWACS and AEW&C aircraft for the IAF; beyond a decade, the operational advantage that the IAF currently has could be compromised. Air assets do not come cheap but it is a price that the nation must be willing to pay for safeguarding its sovereignty.

Combat enablers are ungainly in appearance and do not have the oomph of fast jets; but without sufficient number of the lumbering AWACS the nation’s air defence cover is incomplete.