Why Kalam continues to pay the price for being a nationalist

Former President APJ Abdul Kalam has been a beacon of hope and inspiration for Indians across regions and generations. Schoolchildren are told about his vision, also encapsulated in his books. Discussions around his legacy are held in many regular Indian households. The Indian disapora also isn’t untouched by the ideas of Kalam.

But in a TV debate in 2017, a co-panelist, who was a cleric, told me, “He [Kalam] may have been a great President and human being. I do not challenge it. But as a Muslim cleric, I would say, he was not a good Muslim as he did not practice the laws and lifestyle of Islam.”

Even though it is appalling, it is not uncommon to hear this questioning of Kalam’s legacy within the narrow boundaries of the religion he was born into. 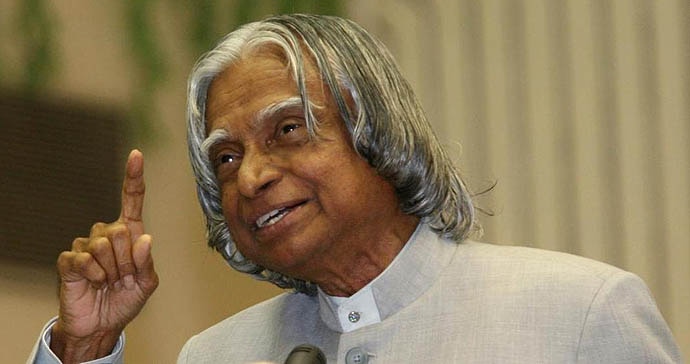 Kalam paid the price for not being a political conformist.

In 2005, he made history by sending back United Progressive Alliance’s Office of Profit bill straight to Parliament. The bill was one of the most ridiculous pieces of legislation India ever saw. In a brazen attempt to allow some favoured parliamentarians to concurrently hold executive positions, the bill created 40 arbitrary exempted positions, which suited the personal needs of the ruling Congress and its allies in Left parties, including Lok Sabha Speaker Somnath Chatterjee, who was provided special exemption to continue heading the Shantiniketan Development Authority.

In 2007, and then again in 2012, when the nation saw him as the most liked person (by far) to get a second term in President’s office, the Congress and Left vehemently opposed his candidature. They exacted their revenge on Kalam for not being a rubber stamp.

Despite being sidelined by the UPA government, Kalam found his appeal among the youth, and continued building a generation of thinkers from educational institutions of India and abroad. He was never given any significant role in the official missions in the central government, not even in his own project of Providing Urban Amenities to Rural Areas (PURA), but even with a small team and zero resources, he was able to build a cult of followers around his vision of “nation above all religion and political parties”.

He turned vegetarian at an early stage in life. He then began playing the veena and reading and preaching scriptures, even of religions he was not born into.

While his success story became an inspiration for all, Kalam did irk the conservative old guard, who expected him to accord a special place in his life to religion. When he took over as President, one of the first few things he did at the Rashtrapati Bhawan was to cancel the lavish iftaar parties and use that resource to support orphanages in Delhi. His logic was that iftaar was meant to serve the poor. Few could challenge the logic; not in public at least.

Kalam knew best how to handle the elements who were looking to pin him down as a ‘right winger’. I remember his oratorical skills. In the same speech, Kalam could quote from four different scriptures. He would appeal to the spiritual side of all religions and assert how theological differences did not matter. He knew how to outsmart and disarm every fundamentalist, who saw him as an adversary.

The battle continued as long as he was alive to fight it.

After 2015, those who wanted to label him as a ‘right-wing Muslim’ began a fresh and unopposed campaign against Kalam.

After all, as a multi-religious, nationalist, spiritual Muslim President, who said his best friend was “Vajpayee ji”, Kalam the anti-thesis of the ideology that India is an oppressive nation for its minorities and that armed struggle against the state is a rewarding endeavour.

Two years after his death, his statue that depicted him playing the veena came under fundamentalist fire because it had a Gita carving beside it. 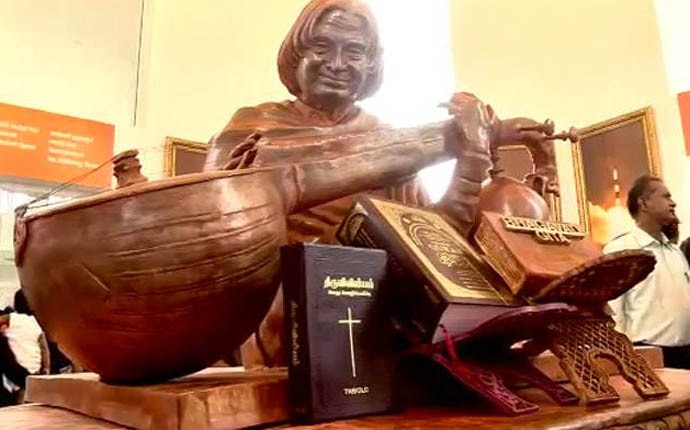 Kalam was never ashamed of having a copy of Gita by his side. (Photo: Twitter)

In a hush-hush operation, an assortment of other religious texts was placed next to the Gita. What was the need for this cover-up? After all, Kalam was never ashamed of having a copy of Gita by his side and quoting from it generously to people from all communities.

There are two traits in Kalam’s personality which must be understood.

First, while he was born in a Muslim family, much of his schooling and childhood were spent in the shadow of Hindu scholarly teachers, Lakshmana Sastry and Sivasubramania Iyer. Kalam fondly remembered both of them as his foundation pillars. Much of his late education happened in Christian missionary schools and, all the while, his parents remained devout Muslims.

Kalam might have been born in one religion, but he absorbed and reflected colours from all religions of the civilisation, in the true sense.

Second, Kalam was a scientific saint.

For him, the best of knowledge and wisdom could exist across many books and religions. That is why the Gita found the most prominent place in his spiritual reading and reflected in his speeches. That is why he wrote books with a revered Jain muni, Acharya Mahapragya (The Family And The Nation) and about a Hindu saint, Pramukh Swami (Transcendence: My Spiritual Experiences with Pramukh Swamiji) of the Swaminarayan society, both of whom he regarded as gurus.

In essence, Kalam was that multi-religious personality, who is an inspiration for every Indian, especially the young. He remains an inspiration to embrace from multiple religions and also putting national interest above all of them.

This faith of a scientific saint must not be derided.