Signs that hurt: Understanding the inherent violence in speech

PETA recently stirred the Internet with its spirited appeal that English users must refrain from language that is rooted in ‘speciesism’. Therefore the new go-to phraseology is ‘feeding two birds with one scone’ instead of ‘killing two birds with one stone’ and you’d draw disapproving glances from your vegan friends for saying, ‘get the bacon home’.

Instead, it is suggested you say, 'get the bagel/bread home’. Activists have come out with a host of creative, animal-friendly phrases that could be used in place of meat-based idioms and we could well smarten up on this count.

Words matter, and as our understanding of social justice evolves, our language evolves along with it. Here’s how to remove speciesism from your daily conversations. pic.twitter.com/o67EbBA7H4

Popular idiomatic expressions that are anti-animals and used in common parlance belong to a faraway time and world. Like ‘beating a Dead Horse’. This saying goes back to the time of Plautus, an ancient Roman playwright in the 195 BC.  Plautus used it in a performance where the performer beat a dead horse to get up to carry the load it was supposed to be moving. The entire act was shown to accomplish nothing and thereafter anyone pursuing an already settled case was supposed to be ‘beating a dead horse’.

‘Beating around a bush’ is an expression that dates back to the 1500s when beaters would drive out little animals hiding in bushes to enable hunters to take shot of them. However, the beaters had to be careful that they didn’t do so till the hunters came. So they used long sticks judiciously. From there we got the ‘beating around the bush’ expression used to mean anyone approaching something cautiously or in a roundabout way.

‘Bringing home the Bacon’ dates back to the days when contests would be held in American counties where a greased pig would be let loose and whoever captured it could take it home. For centuries it has been used to refer to a person who has won a prize or earned something of value, say a salary. Also ‘clipping the wings’, that is to keep someone grounded, alludes to the ancient practice of clipping the wings of pigeons to prevent them from flying away. 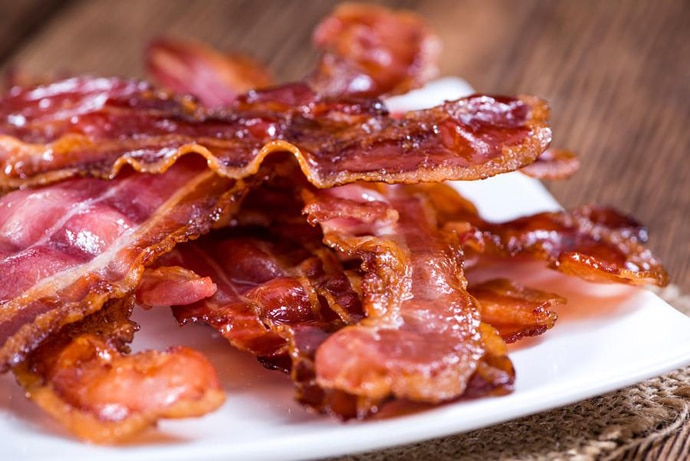 Phrases such as 'bringing home the Bacon' have been used for centuries. (Photo: Facebook)

Other idioms that can be accused of speciesism are: killing the goose that lays golden eggs, there are more ways of skinning a cat, dead dog, lame duck, stirring a hornet’s nest, catching a bull by its horns, straw that broke a camel’s back... and there could be many more. PETA firmly believes that this lexicology is against the culture of tolerance and equality that modern society purports to uphold.

So does this PETA proposed metric carry any weight? Is our language inherently violent? Can language inflict the same amount of hurt as acts of physical violence? Can speech revisions such as those offered by PETA help realign dominant thinking patterns?

Psychologist Lisa Fieldman Barrett would tend to agree for she has, in a New York Times op-ed, emphatically argued that a culture of constant, casual brutality unleashed by hateful speech and abusive language may well be the leading cause for debilitating stress - and a compromised immune system.

Interestingly, within a week, social psychologists Jonathan Haidt and Greg Lukianoff retorted that Barrett’s conclusion may well be true in certain places like college campuses, but the overall equation of language with physical and psychological well being seems a bit stretched.

The duo’s disagreement primarily stemmed from the definition of violence. The accepted definition of violence is 'Behaviour intended to hurt, damage, kill someone or something'. By this measure, Barrett does fall short. Saying “I want to punch you” is not the same as the actual act of landing a vicious punch. “Therefore speech cannot be damaging in the way Barrett has exhibited”, said Haidt and Lukianoff.

However, Haidt and Lukianoff overlooked the fact that language cannot be simply seen as a string of symbols and syntax arrangements. A dictionary might provide us with a ready reference point which often facilitates communication, but limiting our exchanges and understanding to just definitions can make us skip much of the nuanced presentations in thoughts.

Let us understand it better. When Yuval Noah Harari said in his address at Penguin India’s Annual Lecture “Feminism was the greatest revolution of the 21st Century”, it cheered women in the audience who understood the strength of Harari’s word as it echoed their experiences. For the men who did not have such experiences of hurt,  humiliation and marginalisation, Harari’s words couldn’t have cut through in the same way. PETA recently stirred the Internet with its spirited appeal that English users must refrain from language that is rooted in ‘speciesism’. (Photo: Reuters)

Another example of how language and thought are linked and must be viewed ‘contextually’ to derive meaning can be understood in a situation where two male friends, meeting after long, greet each other with chest bumps and a string of abuses. This is taken as ‘friendly banter’, an exchange of feelings that are positive, a sign of deep friendship. The same set of words used elsewhere assumes a different connotation and can be termed as offensive; perhaps even violent especially if it comes riding with aggressive gestures.

In the book The Bridges of Madison County by Robert James Waller, Robert Kincaid uses the phrase ‘quiet cooking’.

It already smells good, he said, pointing toward the stove. "It smells... quiet." He looked at her.

"Quiet? Could something smell quiet" She was thinking about the phrase, asking herself. He was right. After the pork chops and steaks and roasts she cooked for the family, this was quiet cooking. No violence involved anywhere down the food chain, except maybe for pulling up the vegetables. The stew cooked quietly and smelled quiet.”

So food cooking quietly and smelling quiet suddenly gives a sense of serenity and pushes out thoughts of violence in abattoirs and animal pieces being hacked with force and cruelty.

Therefore seeing things from PETA’s point of view would require a widening of the definitions of violence. A dictionary can well fix a meaning to a word, can suggest how it works but the value of each word ultimately arises out of an exchange. Language usage is slippery, messy, changes with contexts. Words can hurt.

That is why we have phrases where ‘words sounded like a slap to the face’ or were ‘like a punch to the guts’. Language is a powerful tool of communication – and words can wound even if the bruises cannot be seen. So if we expand our definition of violence to anything that indents to hurt or wound, physically or psychologically, then speech is violent. PETA scores…

Sexist language is every bit hurtful and can bruise and break down the spirit of a woman. Therefore, choosing our grammar can give more power to women who are victims of violence. Sample this – the phrase 'violence against women’. It is a tamer version as opposed to 'Men’s Violence against Women’.

In the first, there is an overall sense of victimhood, the focus is on the woman and the men aren’t even in the picture. So, it distances the listener.

In the second phrase, the focus is on the perpetrator. So, it names the offender and thereby evokes more outrage.

The term ‘Women’s Issues’ restricts issues to women only. A better construction, more inclusive, could read as ‘Gender Issues’.

It is common knowledge that passive constructions often take away from the agent. That is why they are used in formal sentence constructions. Academic papers use this form of grammar to bring in a sense of neutrality. However in talking of instances of rape and other forms of violence – like in newspaper reporting – passive constructions can remove the spotlight from the perpetrator. Speech can be hateful and hurtful purely on the thought that pushes it through. (Photo: Facebook)

Instead of using: girl raped by boyfriend on a date, the usage of boyfriend rapes girl on date evokes more outrage. The spotlight is on the perpetrator. Passive constructions, therefore, make us passive. We are able to fold the paper and get on.

Words such as 'bitches', 'whores', 'slut', etc., for women as opposed to 'Casanova', 'stud', 'player' for men with the same set of behavioural characteristics are sexist and every bit violent, for they take away from the woman the sense of choice, power and renders them as morally bankrupt.

Therefore speech can be hateful and hurtful purely on the thought that pushes it through. Disturbingly hate speeches aren’t the only ones with a high violence decibel, everyday speech too comes laced with such connotations. We do use phrases like ‘pushed over the edge’ or ‘when push comes to shove’ or ‘killing time’  or ‘breaking someone’s heart’.

In the final analysis, language and violence may not be mutually exclusive. The meaning of words is relative; rooted as it is on contextual and relational spaces. Thus conversations become context – sensitive exchanges. The degree of hurt finally depends on what we say, what we hear, what we interpret.

Words can be markers of the extent of sexism, racism, cruelty prevalent in our society. Social norms often define what is acceptable language. If we accept that it is within human privileges to kill and cut animals, then 'do bring home the bacon', else 'bringing in the bagel' would do just as well.