World Elephant Day 2018: Why saving elephants is as important as saving tigers

As per the elephant census 2017, the number of wild elephants in India is 27,312. Status of elephants is a direct indicator of the status of the forests.

Did you know that the requirement of food and water for elephants are very high and, therefore, their population can be supported only by forests that are under optimal conditions; thus, the status of elephant can be the best indicator of the status of the forests?

Exactly what Project Elephant informs you.

While playing, if it is itchy or even angry, elephants in the wild tend to knock down full-grown, mature trees of the forests. This, in turn, helps other plant species to grow in that space created and, also, provides food for other animals and insects. Partially digested seeds embedded in the elephant dung becomes good manure for it. Elephants have been instrumental in propagation of several species of plant in this manner for ages. The award-winning photograph, titled "Hell is Here", shows an elephant calf on fire. It was clicked by Biplab Hazra, in Bankura

Today, i.e. August 12, 2018 has been marked as World Elephant Day, dedicated to the preservation and protection of the world’s elephants. This can be a good day to know about the elephants that have co-existed with humans for so long.

From ‘elephantine memory’ to a ‘white elephant’, it is part of our almost daily usage. Similar phrases abound in almost all Indian languages, for eg. gajagaamini (gait like an elephant) in Sanskrit and several Indian languages to haathi ka bacha for a fatso in Hindi. Then, there are those symbols. From the iconic mascot ‘Appu’ of the 1982 Asian Games to several popular Hindi and other language films espousing friendship between humans and elephants to occupying pride of place as India’s National Heritage Animal, elephants are an important part of India’s collective psyche. 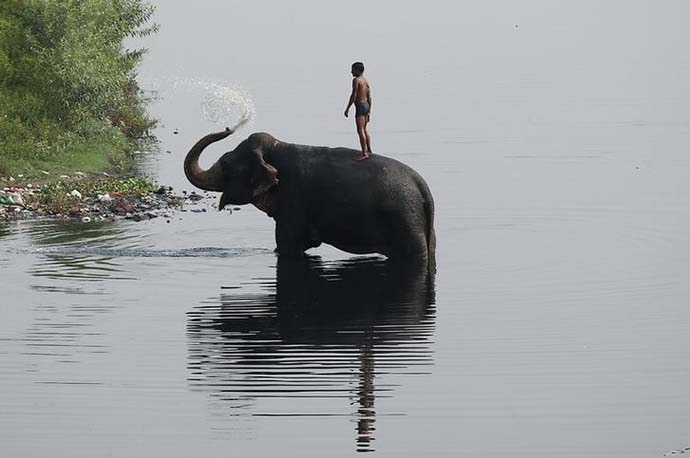 And of course, much before the contemporary symbolism, we have had hundreds and thousands of elephants intricately carved in stone lining the exteriors of scores of temples across India. And perhaps the oldest reference comes from the Indian mythology where we find mention of a white elephant, Indra’s Airaavat, as one of the 14 ratnas that came out during Samudra Manthan.

And yet, since 1986, Asian Elephants Elephas maximus is, in a way India’s identity, have been listed as Endangered in the International Union for Conservation of Nature (IUCN) Red list.

Last few years have been especially problematic. In India, the numbers have been dwindling steadily even when we have almost 55 per cent of total world elephant population of this category. All is not well on the elephant front in India (Photo: Reuters)

But all is not well on the elephant front in India. The resource requirements of India’s growing human population has led to the destruction and fragmentation of wild habitats across the country, depleting the area available for elephants to roam. The traditional migratory paths of the wild elephants have been adversely impacted. This naturally increases the instances of elephants dying unnatural deaths and, also, of the man-animal conflicts, experts point out.

Out of the 88 identified elephant corridors in India, 21 have railway tracks running through them. The knowledge of these corridors is passed on between elephants from generations to generations, thus walking through these corridors is a natural instinct for these majestic animals. As the resources in their fragmented pockets become scarcer, these elephants are pushed to cross railway tracks in search for food often to meet their fatal end. 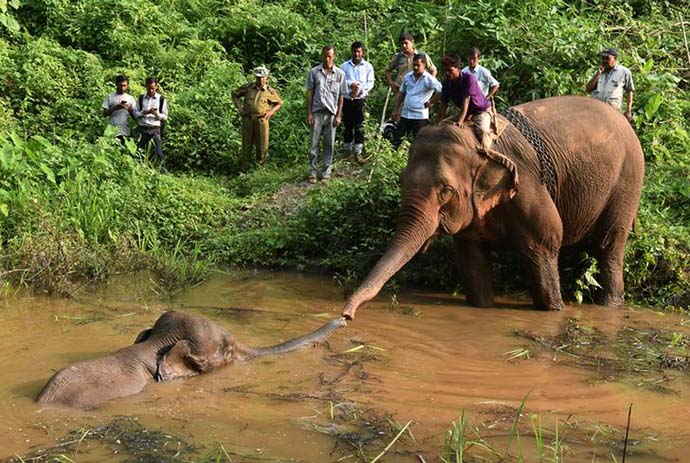 Not only Assam, adjoining north Bengal is not safer for elephants (Photo: Reuters)

The government also agreed that “construction activities, deforestation, have adversely affected the natural habitat of elephants. Fragmentation and Deforestation is severely affecting the animal including the elephants. The total estimated area under encroachment in the notified Reserve Forest and Protected Area in Assam is about 3,555 sq. kms. (13.29 per cent of the total notified area). This has also affected the habitat of elephants by way of fragmentation.”

But it is not just Assam. Adjoining north Bengal is no safer. As per a media report, a female elephant and its calf were mowed down by a passenger train in Jalpaiguri district in July 2018, taking the number of elephants killed by speeding trains this year to four and the toll since the tracks were changed to broad gauge in 2004 to 68.

“Poaching for captivity is also a serious threat faced by Asian elephants. The rich cultural and natural heritage of India attracts a substantial footfall of tourists every year. For most tourists, interaction with elephants tops their bucket-list item and sadly, misinformation often leads them to places where captive elephants are used to lure and extort money from tourists. The sad truth of captivity that a baby elephant is poached from the wild at a tender age of 2 from its natural habitat and familial herd is cleverly blanketed with ‘joy’ of checking one item off your bucket list!” according to Wildlife SOS, the charity that has been running a one-of-a-kind Elephant Conservation and Care Centre (ECCC) since 2010. 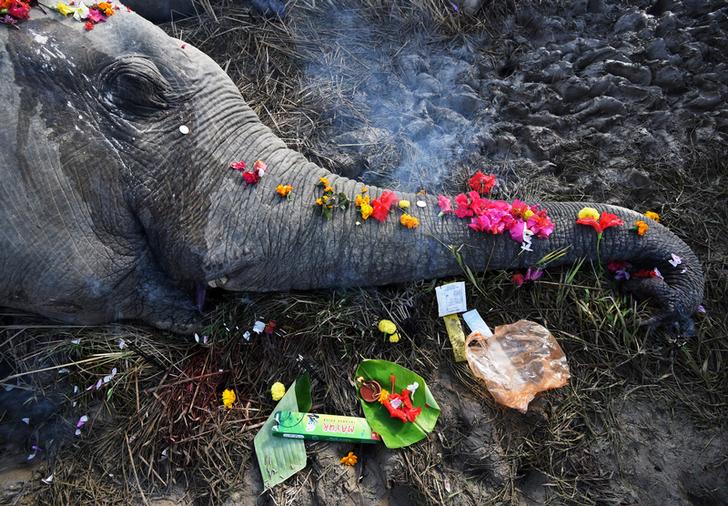 Flowers on a carcass of an elephant, who according to forest officials was electrocuted in a paddy field in Assam in 2017 (Photo: Reuters)

Another major crisis on our hands is human-elephant conflict. As more and more forests are being destroyed to create space for new agricultural lands, it comes as no surprise that incidents of crop-raiding, destruction of property and loss of human lives have escalated.

“However, such conflicts are avoidable — with the help of scientific wildlife tracking techniques and rigorous community engagement and sensitisation, a safe space for both farmers and elephants can be created. This is an important piece of puzzle towards elephant conservation!” Kartick Satyanarayan, co-founder & CEO of Wildlife SOS, says.

In continuation of that, there is going to be the first edition of ‘Gaj Mahotsav’ — a four-day-long festival celebrating the majestic Asian elephant from August 12-15, 2018 at Delhi’s Indira Gandhi Centre for Arts (IGNCA).

Artists from across the country have created 101 life-sized elephant art pieces representing the 101 elephant corridors of India. The festival is being organised in association with the ministry of environment, forests and climate change (MoEF&CC), in partnership with the International Fund for Animal Welfare (IFAW) and United Nations Environment.

Vivek Menon, executive director & CEO, Wildlife Trust of India, says, “While policy makers have realized the urgency of the situation and are taking remedial steps, there is an immediate need for a much bigger, stronger and comprehensive policy change to prevent a sharp decline in the elephant population. Additionally, people need to be more sensitised to the plight of the elephant and view the animal as the victim and not an adversary, to prevent any further deaths arising from animal-human conflicts.” 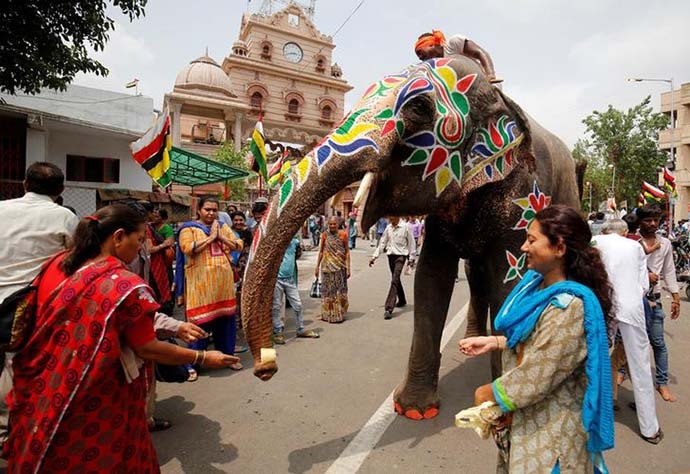 There is an immediate need for a policy change to prevent a sharp decline in the elephant population (Photo: Reuters)

Reiterates Kartick Satyanarayan, “It has now become the norm to open the newspaper and read horrifying news of elephants dying due to unnatural, anthropogenic reasons. This normalisation of unnatural deaths of elephants in India is alarming to say the least. The survival of Asian elephants today lies in the hands of us — conservationists, policy-makers, practitioners and local communities alike.”

We need to understand clearly that human existence is intricately linked with the existence of these elephants. If not for them, for own survival, humans need to be sensitive about elephants. As rightly pointed out by experts, elephants’ future in the wild is so fragile right now – any setbacks could be catastrophic.

Also read: Why India's elephants are dying on its railway tracks

#Forests, #Elephant corridor, #World elephant day, #Elephants
The views and opinions expressed in this article are those of the authors and do not necessarily reflect the official policy or position of DailyO.in or the India Today Group. The writers are solely responsible for any claims arising out of the contents of this article.