People need to stop shaming women who hit back at sexual harassment.

Actor Zaira Wasim, who won hearts with her power-packed performances in Dangal and Secret Superstar, has alleged that she was molested on a flight from Delhi to Mumbai late on Saturday night.

The actor took to Instagram to post two videos, one taken on the flight and one from the airport, in which she spoke about a passenger allegedly running his foot over her back and neck while she was half-asleep.

In the airport video, the 17-year-old Wasim is in tears, saying: “The whole irony of this is… when I yelled… This is not done at all, I am disturbed, that is fine, but this is not how anybody should be made to feel! This is terrible! Is this how you are going to take care of girls? No one is going to help us if we don’t speak up for ourselves, and this is the worst thing.” 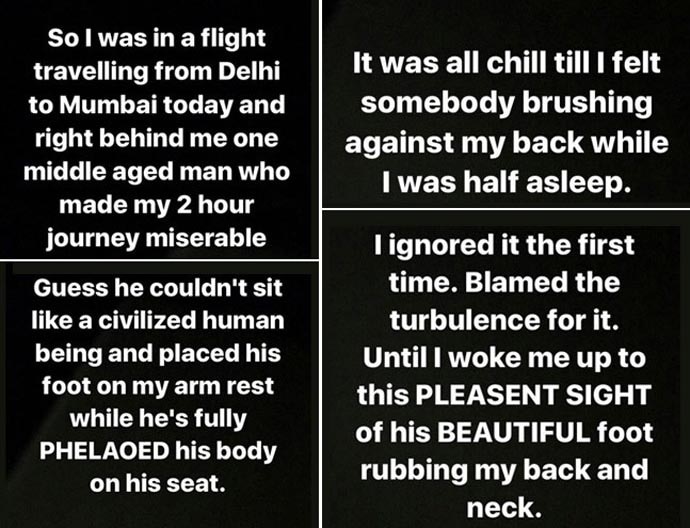 The actor’s manager later claimed that the Vistara flight crew did not come to her aid on being informed about the incident.

The authorities on Sunday swung into action, with the Mumbai Police recording Wasim’s statement and registering a case against an unknown person under the Protection of Children from Sexual Offences Act (POCSO) 2012, as she is only 17 years old.

The women’s commissions from both Delhi and Maharashtra, as well as the National Commission for Women, have assured the actor of support, with the Maharashtra State Commission for Women (MSCW) chairperson Vijaya Rahatkar saying she would take the “shameful incident” up with the Directorate General of Civil Aviation, the airline and the police.

Vistara, on its part, has announced that it has a policy of “zero tolerance” towards such incidents and has launched a probe into it.

According to reports, the plane’s cabin crew has said that Wasim started yelling at the accused passenger only when the flight started descent, and they couldn’t come to her rescue because it’s mandatory to keep seat belts on during the final phase of the flight and make no movement.

“Zaira had not brought this to the notice of the crew till the flight commenced the descent,” a report quoted a source as saying.

According to airline sources, after the landing, the crew asked Wasim, and her mother who was accompanying her, if they wanted to file a complaint, but they refused to do so.

While the police will now probe what exactly happened, social media was abuzz with discussions about the incident. Many, including Jammu and Kashmir CM Mehbooba Mufti, spoke out in Wasim’s support.

However, there were others who accused her of trying a “publicity stunt”, or questioned why she did not raise a hue and cry while in the plane, once again demonstrating how a girl speaking out about sexual harassment will always be treated with suspicion, and how the society at large is just as responsible for women’s plight as the "few" errant men.

Wasim is only 17. Both the movies she has acted in have received critical acclaim as well as commercial success. She has also won national awards for both her performances. Does such an actor need to create controversies for publicity?

Allauddin Khilji and his barbaric army was forcibly trying to do very same things with Padmavati and 16000 women what co-passenger did to #ZairaWasim. Hopefully those who eulogise Khilji as a reformer will be ashamed of themselves and their upbringing.

It might be the case of etiquettes than molestation, one should not be judged so quickly No offense Pic for reference ????#ZairaWasim pic.twitter.com/zK6vrDXU5F

3/3It's wrong to shame the man accused of molestation by #ZairaWasim without hearing his side of the storyShe & her mother think crying @instagram instead of taking action makes sense.I think that's a publicity stuntIf Molestation did occur, why hasn't she filed an FIR yet?

Some facts about Zaira Wasim - Vistara Incident1) accused male pax in the starting told the crew he’s going off to sleep and not to disturb him 2)Zaira started yelling at the accused pax only during the descent of the flight or the final path of the flight. —1

.#ZairaWasim This is Airline seating position. Pls explain how can someone put his feets on your neck and back? unless U were not sitting on the seat but the middle armrestSTOP Drama & defaming @airvistara @aamir_khan pic.twitter.com/SYH7WbFIQZ

In her short stint in public life, the teenager has had more than her share of controversies. While she was trolled and even issued death threats by hardliners for cutting her hair short and when CM Mufti called her a Kashmiri role model, she was attacked by the nationalist brigade on social media after old posts of her mother supporting Pakistan in a cricket match surfaced.

In January, sports minister Vijay Goel tweeted a picture of him near a painting with two women, one with a hijab and one cowering in a cage, and said that just like Zaira Wasim, girls have now begun to fly out of their cages.

Wasim had responded to this, saying Goel should not have connected her to such a “discourteous depiction”, and that women wearing hijab are “beautiful and free”.

Even after the Mehbooba Mufti controversy, she had written a long note on Facebook, saying she was not a role model and calling her one disgraced “real role models”. It's a disgrace that a girl as strong and fierce as Wasim is being accused of trying to create a controversy for publicity.

Also, Wasim can’t be blamed for not speaking out at that precise moment when she first felt attacked. Molestation is a shocking, disturbing incident, and every woman reacts to it differently. It is her prerogative as to when and how she chooses to react to it. Wasim so far has followed the due process — getting her statement recorded and a police complaint registered.

Zaira Wasim is a celebrity, and hence all the authorities concerned reacted fast in her case. Not every woman is as fortunate. However, the criticism being thrown at her shows that in some cases, every woman is equally disadvantaged.

The kind of trolling a visibly shaken Wasim is receiving can easily intimidate other women and discourage them from speaking out against similar harassment.

Most women do have experiences of assault or molestation in public transport, and many choose not to call out the harassers because they know while no one will come to help, their clothes, their conduct, the hour of the day etc will immediately come under scrutiny.

Also, after every case of sexual assault, the general response is to police the movements of women. What will it be this time? That women should not take flights so late in the night?

It is the job of the police to now investigate what exactly happened onboard the Vistara flight. However, the least we as people can do is to create a conducive atmosphere for women to speak out against sexual harassment, and not make a girl feel like a criminal every time she chooses to fight back against offenders.

Also read: What PM Modi can tell you about 'neech' that Mani Shankar Aiyar couldn't explain