When 'Pappu' scores more than the 'proud' class topper

The BJP’s Hindutva agenda was always going to be a problem.

The Indian education system is notoriously exam-driven. ‘Toppers’ are fetishised in hoardings and full-page newspaper advertisements. The Indian school vocabulary also has a cautionary word for toppers: ‘proudy’, which stands for an egotistical arrogance. If you come first in class year after year, the teacher warns you to not become proudy. If you’ve been a topper for a few years, then it’s assumed that you automatically have become a proudy. It’s in the nature of things.

Could it be that the Modi-BJP juggernaut had become too proudy in recent times? Seen in this light, its loss in four states can be seen as a corrective. The public — suicidal farmers, jobless youth, ordinary folk — is telling the saffronistas: be less proudy.

The victory of the Congress, and KCR’s victory in Telangana (and his talk of a third front, not aligned with the Congress), has introduced an air of reasonableness to Indian politics. It’s more genuinely reflective of the diversity of the country. The BJP’s Hindutva agenda was always going to be a problem. (Photo: Reuters)

What does the proudy one do from here on? Does he dig his own grave by further entrenching himself in proudiness? Or does he modify, dilute and adapt his position?

The BJP’s Hindutva agenda was always going to be a problem. It kept it hidden in the last general elections, speaking only of ‘sabka saath, sabka vikas’ and ‘good governance’. It was only a matter of time before the Yogi brand of saffron was thrust down people’s throats. The cow took eminence over human beings.

The BJP has become too bogged down by ideology. Hindutva is in its DNA and part of its RSSaison d’etre. It might prove to be its undoing.

The BJP in many ways singlehandedly created the Indian Twitter liberal (and the liberal columnist) in the last four years. By inventing the bhakt, it spawned the liberal. The Congress, which earlier had a blandness to its world view, overnight became the upholder of something called ‘liberal values’. It rebranded itself. 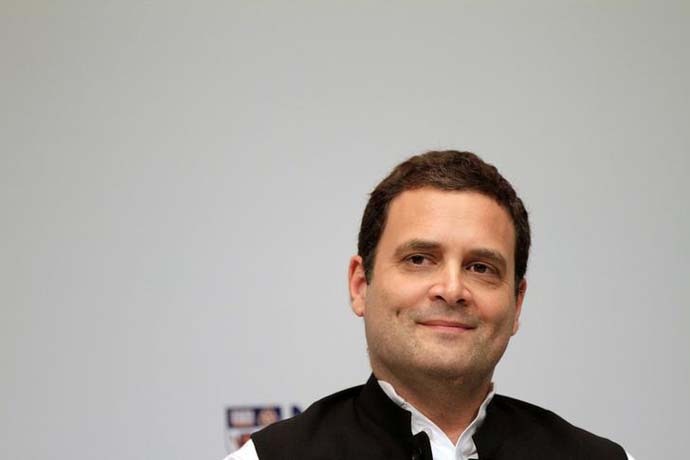 New charm: He is urbane and good-looking and fluent in both languages (Photo: Reuters)

The bhakt became synonymous with gali-galauj on Twitter and lynchings on the street; the liberal Congress the political face of civilizational values. The BJP meanwhile has become obsessed with its own vendetta-driven ideological battle with left academics and Lutyens Delhi liberals. This is selfish navel-gazing.

The farmer doesn’t even know where Lutyens Delhi is nor does she care. The present government then has become a means to settling scores, of waging a personal ideological war on behalf of the RSS. What happened to serving the people?

Ideology is self-limiting. Giving citizens god, when they want development, is like giving them cake when they want bread. Expecting millions of Hindus to turn against their fellow Muslims was always going to be a fantasy. Why create new issues when there already are so many to be fixed? Because one is a slave to one’s pre-Independence Hindu Rashtra ideology.

The BJP lives in the past: attacking Nehru and his ‘wrongs’ has no resonance for a generation that doesn’t even remember Rajiv Gandhi. Rahul, in the meanwhile, was pretty much starting on a clean slate, with absolutely nothing to lose, no baggage whatsoever except that of being the underdog.

Modi continued attacking him over dynasty, but dynasty is never a problem in India. This is a country where hereditary succession is the norm in most families, from small shopkeepers and big business to dentists and politicians across party lines. Instead of vikaas, the BJP inexplicably got bogged down in its fantasy of a Congress-mukt Bharat. Instead of creating new positives, it was unable to overcome the past: a defunct party, which it had already demolished, and the fictional glories of an ancient India. It’s only positive contribution turned out to be a disastrous negative: demonetisation.

Once Rahul hugged Modi in Parliament, the narrative had been recast as Proudy vs Pappu. The words of Proudy started ringing hollow while Pappu’s had pluck, sanity and the underdog’s fearlessness.

There is no better PR exercise than victory. When you win, you look different. People’s perceptions change. Like DBC Pierre said after winning the Booker for Vernon God Little: They all come crawling out of the woodwork. For the many fence sitters, Rahul is suddenly a possibility.

The joker suddenly looks attractive, especially to the young urban voter tired of anti-Muslim and pro-cow rhetoric. Moreover, he is urbane and good-looking, with sexy dimples, and fluent in both languages. He is the new young English master who has just joined school (and is often seen in the gym).

Whatever happens next year, the equations have been recast. The playing field has been levelled out a bit, making the game less one-sided and more exciting. Modi will have to rethink his strategy: lampooning and belittling Pappu and imposing a Yogi-style Hindutva on people is not going to work.

The Congress has clawed back but will do well not to slip back into its own fantasy articulated by a senior spokesperson: the Congress is India’s default setting. It is not.

As Suhas Palishkar wrote, if nothing else, these elections have brought ‘the BJP’s narrative down to earth.’ In other words, it will make them less proudy. Or, it might ramp up its Hindutva agenda further and self-destruct.

Also Read: What no one talked of after Congress' wins: The party is back to wooing Brahmins, and stoking caste fears