The great ruin of Britain has begun

In a bygone age, today's Britain would have seemed a plum target for imperial conquest; its crippled polity, social decay and military impotence attracting rapacious foreign powers to share its land, people and spoils among themselves.

If it were remotely worthwhile, I would advise India to send a fleet forthwith to subdue these islands and bring to the natives the uplifting benefits of Indian civilisation – the love of knowledge, for example, culture and artistic beauty – shining light into their benighted beer-soaked existence.

The Paradise Papers revealed that the Queen has, like some grubby Third World despot, been siphoning tens of millions of pounds – taxed from her ever-grovelling subjects – into shady off-shore accounts, ripping off her own realm. Some of that money even found itself reinvested in Britain in a high-interest furniture-leasing company that exploits the poorest.

And last week, the Indian-origin minister, Priti Patel, who was responsible for the UK international aid budget, was made to resign after it was discovered that she was conducting her own personal foreign policy, bypassing official procedure to have secret meetings with Israeli politicians.

In Britain, supporting Israel is almost a hanging offence. Like NRIs, the Jews will never be forgiven by the embittered dimwitted Left for overcoming adversity and making something of themselves here. While most UK lefties have never met a Palestinian and struggle to name more than one, they froth at the mouth in solidarity with them – such is their visceral antisemitism. This made Patel an easy target in a weak minority government. Had she met the politicians of any other country, no one would've cared.

Nonetheless, her maverick behaviour is another example of how the UK is disintegrating into disparate competing fiefdoms and unable to co-ordinate its way out of its malaise. More factionalism emerged over the weekend when foreign secretary Boris Johnson suspended his enmity with the man who stabbed him in the back during his failed attempt to become the PM last year - environment secretary Michael Gove - to reprise their right-wing double-act as the Laurel and Hardy of Brexit, bullying Theresa May with a threatening letter demanding a brutal severance of ties with the EU.

The Tories are riven between those lunatics who think Brexit will be a success – despite the hourly drip-feed of information to the contrary – and the sane few who are prepared to defy the geriatric imbeciles of the party faithful to save their country from disaster. The party membership consists of little more than one-hundred-thousand provincial septuagenarians.

In a decade most will be dead, yet they are holding the nation to ransom. 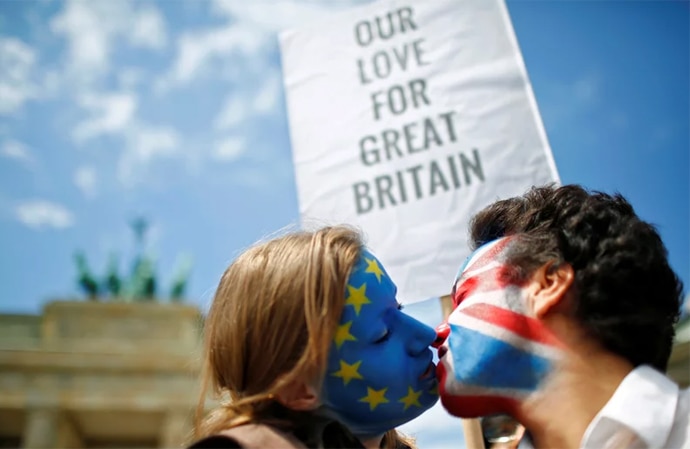 Theresa May is thus in the ludicrous position of having to do enough to make it look like Brexit will happen while not actually moving the process forward – by, for example, paying the 60-100 billion euro divorce-bill the EU is demanding before trade-talks begin.

Luckily, the truculent senile right-wing is so resistant to paying anything whatsoever, she can continue kicking this can down the road until enough of them have died to forget the whole idiotic business altogether. She could, in fact, hasten the process just by rescinding duties on alcohol: a sufficient number would drink themselves to death within months.

The demographics are clear: the Tory Party is finished. But Labour offers no salvation. Somehow its leader, Jeremy Corbyn, a paleo-leftist of the sort that has been driven to extinction everywhere else, has convinced a great swathe of the electorate that he is the individual – armed with the two grade-E qualifications he achieved at secondary school – best equipped to defeat the likes of Tata, Xi Jinping, Goldman Sachs and the other giant global entities who hold the British economy firmly by the scruff of its neck.

Britain is massively foreign-owned. Indeed, Tata is the biggest private employer – owning the steel industry and brands including Jaguar and Land Rover – and could shut the country down tomorrow. But millions still think Corbyn will restructure their society along socialist lines.

Like Brexit, socialism is impossible here because the British are now bystanders to their own destiny – which lies entirely in the hands of outsiders. Like Tata, the Chinese, Europeans, Japanese and others have not invested billions – in everything from nuclear reactors to football teams – to have their plans disrupted by a deluded Anglotariat that wants to break from the EU or pursue a Marxist vision of utopia.

No longer controlling their key assets, the British are now a colonised people, to be dredged by their foreign masters for whatever silver can be got, reduced to coolie-status in their own country as immigrants increasingly muscle them out of the economy. The UK population will reach 70 million by 2030, driven largely by incomers and their offspring as foreign oligarchs continue to replace the lethargic ineducable Anglotariat with more adaptable and productive employees from abroad.

The scale of foreign control over Britain is most apparent in its media-ownership. Four national newspapers and several television stations are owned by the Australian-turned-US-citizen Rupert Murdoch, while London's influential Evening Standard is owned by Alexander Lebedev, a billionaire former KGB-agent. In true banana-republic fashion, that paper is now edited by George Osborne – chancellor of The Exchequer until he was sacked last year and once David Cameron's heir as prime minister – who uses his position to attack the government that ejected him.

The Indian equivalent would be Arun Jaitley leaving the finance ministry to edit the Mumbai Mirror after it had been acquired by an ex-ISI officer, to then carp at the NDA: a notion that is wholly unthinkable because India, unlike Britain, is not a banana republic.

The Russians in particular revel in treating Britain with contempt. Not only do they regard London as a shopping-and-clubbing suburb of Moscow, they use it as an abattoir too. A recent Buzzfeed article quoted US intelligence saying that at least fourteen assassinations have been committed in the city by Russian operatives, all covered up by the UK government to hide the impunity with which foreigners act on their soil. This story was not picked up anywhere in the British media.

Reports are emerging of Russia influencing the Brexit referendum result through social media, much as it is alleged to have done with the US election. An investigation is underway into whether it also funded the Leave campaign. Such is the level of nefarious activity underway in London, a UK intelligence officer was quoted in the Observer newspaper, calling the city a "nest of spies", with more "espionage activity here now than there was even at the height of the cold war".

London's international character and unbridled capital-market means its economy and prominence will continue to grow as it attracts hot money from every sheikh, pimp and narco-baron who needs someone to manage his loose millions. And the British people will continue to be sidelined and diminished in the process.

Given this post-British reality, it was heartening to read in Newsweek of India's intention of taking the stewardship of the Commonwealth away from the UK ahead of next year's Heads of Government Meeting. Brexiteers fantasised that the organisation was their platform for launching Britain into post-EU global prominence, but India is already the natural centre of gravity among its members – a gravity that will grow exponentially.

The next step should be to relieve the British of their seat on the UN Security Council. Now that the US is pushing for India's entry into the APEC, it is obvious the world wants her to play her necessary role alongside its front-rank powers.

India has many things to offer the world that the British do not: a booming economy, a vast smart young ambitious population and a huge, successful and networked global NRI presence. The leaders of two EU states – Ireland and Portugal – are currently NRIs, as are a multitude of top CEOs.

Most importantly, India has a future while the British only have their briefly glorious past – the legacy of which they have squandered. It is fitting that she now take their place in the greater scheme of things.