The ‘wish goddesses’ grant what you want. Just whisper it into their ears at the Chausathi Jogini Temple in Odisha

If you offer your soul and speak your heart, they say the Yoginis listen.

Fierce and magical, the Yoginis, they say, can grant wishes.

They can gaze upon a worshipper and grant his innermost desires. And if propitiated, the Yogini can come alive and step out of their stone niches.

Hidden away on the outskirts of Bhubaneswar in Odisha is Hirapur. It is a quiet and sleepy village, with green fields and ponds, and children playing in little clearings outside mud huts. A little further in, one finds an area which has not seen very recent development. The Chausathi Jogini Temple in Odisha. (Source: The Wiccan Brigade)

It is the 8th century temple of the 64 Yoginis, called Chausathi Jogini Temple. Circular and roofless, it is a strange place of old magic. A low wall, about five feet high, encircles a circular space, paved with worn rocks. There is no roof, and the elements bear down in light and shade.

As one enters the circle, a strange silence strikes one.

Stepping upon the stones seems to create a humming noise within the ears.

Embedded in the niches on the low wall are small alcoves — each with a strange looking deity within. Female figures carved in black chlorite, they have strange forms and features.

They stand on animal and human vahans, some with two hands, some four. Some of the figures bear strange emblems on their hands. Some of the forms have animal faces and human forms. Some are benign figures of goddesses, but if one looks closer at many of them, sharply carved fangs edge out from the corners of smiling lips.

Intriguingly, this temple even has Ganesha as a female Yogini, as it does the lion-headed Narasimhan. 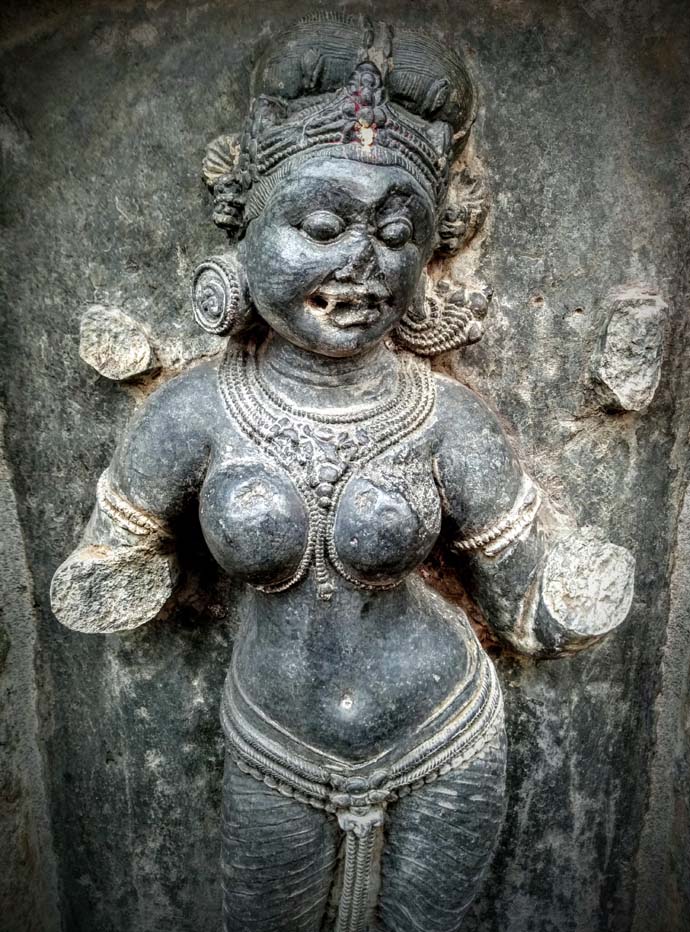 Some Yoginis have two hands, some four. (Source: The Wiccan Brigade)

All around the temple, even in the hottest summer, the grass is green and lush.

Tall trees throw cool shadows around the sacred shrine. An old well a few feet away shows glassy water far below. Behind the temple is a hand pump which gives ice-cold water from deep below the red soil.

The Yoginis are believed to be magical beings — part-human, part-divine. Ferocious and arising from a primeval dark energy, they are believed to carry a magical force within them, trapped in their consciousness. Old legends speak of worshippers invoking these powerful beings to seek fulfilment of their deepest desires.

Yellow marigold was ground into paste and smeared at the feet of the Yogini. Red hibiscus touched to the forehead. Camphor, burnt in small stone vessels on the stone floor. And then, the worshipper would lean in close to the Yogini he bowed before, and whisper into the little niche, his words of prayer. It was like a secret communication between him and the ancient goddess. 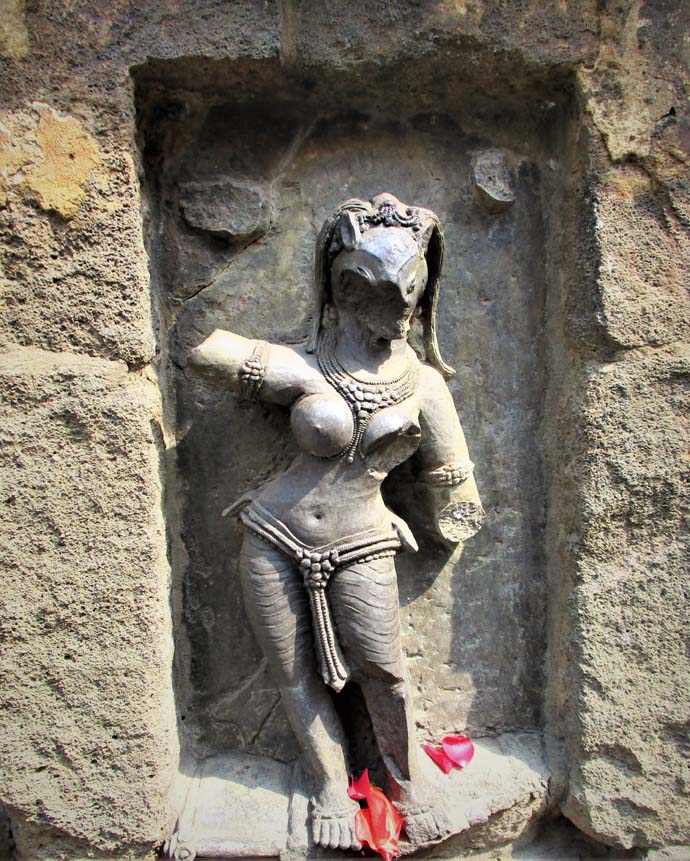 Devotees must whisper into the ears of the goddesses to have their prayers answered. (Source: The Wiccan Brigade)

It was from then that the strange stories flowed. Of how a dark chlorite figure would sometimes move. The eyes would flicker and gaze upon the worshipper. An animal head would bow. A hand would shift and a dark finger curl. A greenish hue would sometimes glow around the dark chlorite, like fluorescence, from an awakened form. And even as the awestruck devout lined up at this secret shrine of the 64 Yoginis with mingled fear and hope, word spread of strange miracles granted by these fearsome goddesses.

Today, the temple still stands, in a secluded corner of Odisha. The chlorite forms in their niches are damaged and crumbling in places. But if you offer your soul and speak your heart, they say, the Yoginis still listen.

Post your comment
#Odisha temples, #Odisha, #Temple, #Chausathi jogini temple
The views and opinions expressed in this article are those of the authors and do not necessarily reflect the official policy or position of DailyO.in or the India Today Group. The writers are solely responsible for any claims arising out of the contents of this article.