Kakima overheard someone saying they got a phone call from the neighbouring town, and their relative informed them that Kaljani had overflown again, and the water was on its way to Cooch Behar.

It was the monsoon of 1993. North Bengal was reeling from the horror of a flood that had left it crippled. This part of the country lies in the foothills of the Himalayas, so monsoons are maddening. The districts of Cooch Behar and Jalpaiguri (it included Alipurduar back then), the plains, are anyway battered by incessant rains. Non-stop. The rain that can make you forget the sky is any colour but grey. That there is something called a sun somewhere behind the thick, menacing clouds. The streets resemble rivulets, and crabs and fish swim around till someone uses the needle of their umbrella to catch one and bring back home. Lunch is sorted. Fresh crab.

It was one such monsoon evening. The elders were busy preparing for the cha-muri-chanachur (tea-snacks) session, and the kids had just come home from a game of football. My teenage cousin played; I, his 10-year-younger sister, watched from the verandah. He went in for a bath to scrub off the last remnants of the sticky icky monsoon mud. A match well-played.

The sun had set. My father was yet to return from work. There was a sudden commotion outside our "quarter". Someone came running from the Quarter No 1 side, and right at the bend of the road where Quarter No 5 made way for Quarter No 6, she started screaming, "Bonya! Bonya! Jol! (Flood! Flood! Water!)" 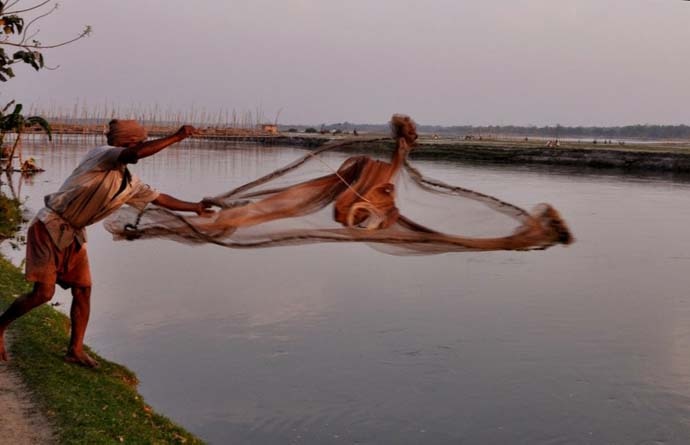 Kaljani, a tributary of the Torsha, caused a devastating flood in 1993. (Photo: Arabinda Bhattacharya)

By the time she crossed our quarter, No 7, the news had reached inside. Floods! There was water! This Kakima (aunt) overheard someone saying they got a phone call from the neighbouring town, Alipurduar, and that their relative informed them that Kaljani had overflown again, and the water was on its way to Cooch Behar. Before the water could reach anywhere, she sprinted her way through the 'para' (locality in Bengal) and had done her job of alerting everyone.

Inside our house, all hell broke loose. My Ma and Pishi - Bua/aunt, who I call Pushi, disconnected the BPL television set - it was a colour TV, the most expensive commodity in the house - and began packing it. My cousin looked for the highest available space. The top of the almirah looked good. Ma, with his help, lifted the TV and put it out of the reach of the on-its-way water.

In the other room, my grandmother began packing dry rice and dal in potlis. Some of the spices went straight into her aanchal, right next to the keys of the house.

Pushi's husband, my Uncle, was in the Army. So he was anyway not at home. The only 'man' in the house when this calamity struck was a 14-year-old.

Every 2 minutes, I had the task of going to the verandah and checking if the water was here yet. It was a new, exciting sport. Spot the water!

Soon, the elders began discussing who in the para had a two-storey house. Our para comprised 24 one-storey government quarters whose tin roofs were out of bounds for all of us. Ma, Pishi, Didun (grandmother) zeroed in on a friend's house, which was right next to this cluster of quarters. Now this house had an accessible tin roof. They had a sturdy ladder which they often used to go to the roof.

The decision was made. Four-year-old I will hold on to Didun's hand like my life depended on it (it probably did). My two-year-old sister would be with Ma, brought to this friend's house after the rest of us had left.

All of them kept wondering how to get in touch with my father. No mobile phones, you see.

So I held Didun's hand tightly and started walking. By now, the entire para was out on the road. Numerous people. All running to some semblance of safety. All wondering how many minutes we had before a gust took us away. And just when you didn't need it, load-shedding. It was pitch dark.

I let go of Didun's hand in the mayhem. A group of people coming from the other side swept me away and took me with them. Men, women, kids. I didn't know any of them, but knew they were neighbours.

Suddenly, the light of a pencil torch fell on my face. One of my dad's friends spotted me in this crowd. He pulled me up on to his bicycle and took me to his home, which was a two-storey house. A lot of others had also assembled at this 'building' because the height promised safety.

The minutes passed. A few hours passed. There was no trace of any water anywhere.

Slowly, people realised they had dinner to prepare and homes to return to. The first brave family walked out. "Naah. There's no water."

One by one, the house cleared out till it was just me, the kid with nowhere to go. Around 9.30 pm, the uncle decided to take me back home.

So we walked home. As I reached Quarter No 7, I could see all my family members standing outside. Ma in tears. She thought her elder one was gone.

There was a teary reunion.

Half an hour later, my father came back home. The moment he entered, he was accosted by a million questions. "Where has the water reached?" "How much time do we have?" "How is the situation in Alipur?" "Has the flood caused a lot of damage there?"

My father, back from his evening of news-hunting and filing stories for the local newspaper, shot back, "What flood?" 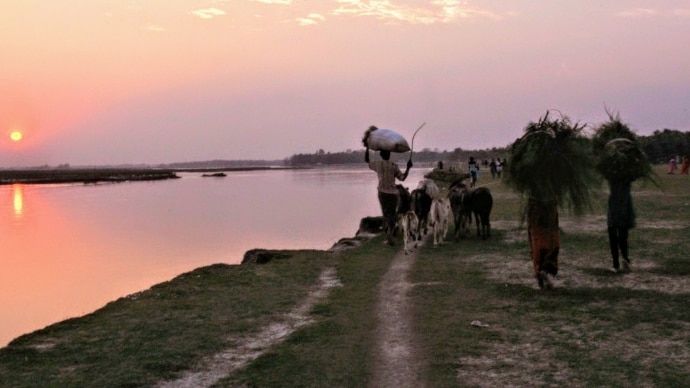 The newspapers the next day had nothing on the floods, quite understandably.

The next day, a tiny column announced the number of colour television sets that were sacrificed to this 'Shukna Bonya'. Dry floods.

By the afternoon, more 'revelations' started tumbling out. The Kakima who overheard someone did not actually hear the 'relative in Alipurduar part'. Like a classic game of Chinese Whispers, the tale got twisted.

A group of boys were returning from Alipurduar to Cooch Behar on a truck. They spotted some people and started screaming, "Bonya! Jol! (Floods! Water!)" Now since the information was from a truck on its way from Alipurduar, which had just recovered from a devastating flood and was on the banks of the dreaded Kaljani, it was thought legit.

It was a prank. There were no fact-checkers then. Turns out someone had called my father at the office; and he, in turn, had called the Control Room for information on the water level. But before this fact could reach home, the Shukna Bonya did!

Also read: I lived through Cyclone Amphan in Kolkata. It has humbled us all