In recent times, we have descended to the level of attacking an advertisement — a washing powder commercial that ends with the hashtag 'Rang Laye Sang' (colours bring us together).

The ad shows a girl, who is apparently Hindu, getting Holi colours thrown on her as she traipses down a lane — at the end of which she meets a Muslim boy who is a friend. The detergent advertisement has come under attack apparently for presenting Hindus as 'aggressors'. (Source: India Today)

Around the same time that the ad was attacked, I was told by one of the lesser known worthies of the Right on an otherwise venerable and sober TV channel that I should be grateful I have been accepted by Hindus.

There is very little one can say to such people.

I thereby give an offering of Holi song, dance, music and painting to the gentleman, whose name did not register, and to others of his ilk.

With love and best wishes.

First, it’s a well-established fact that the Mughal emperors were quite enamoured of Holi. The miniature paintings capture this beautifully. Exhibitions of Mughal miniatures establishing the fascination with Holi have been held in many places including the British Museum. Akbar certainly was enchanted by Holi — he is said to have built a collection of pichkaris. It is also part of the legend that Holi was the day when commoners could put colour on the emperor.

His son, Jahangir, would write the following in his memoirs, famously known as the Jahangirnama:

“Holi, in their belief is the last day of the year. This day falls in the month of Isfandarmudh, when the sun is in Pisces. On the eve of this day they light fires in all the lanes and streets. When it is daylight they spray powder on each other’s heads and faces and create an amazing uproar. After that, they wash themselves, put their clothes on, and go to gardens and fields. Since it is an established custom of among the Hindus to burn their dead, the lighting of fires on the last night of the year is a metaphor for burning the old year as though it were a corpse.” 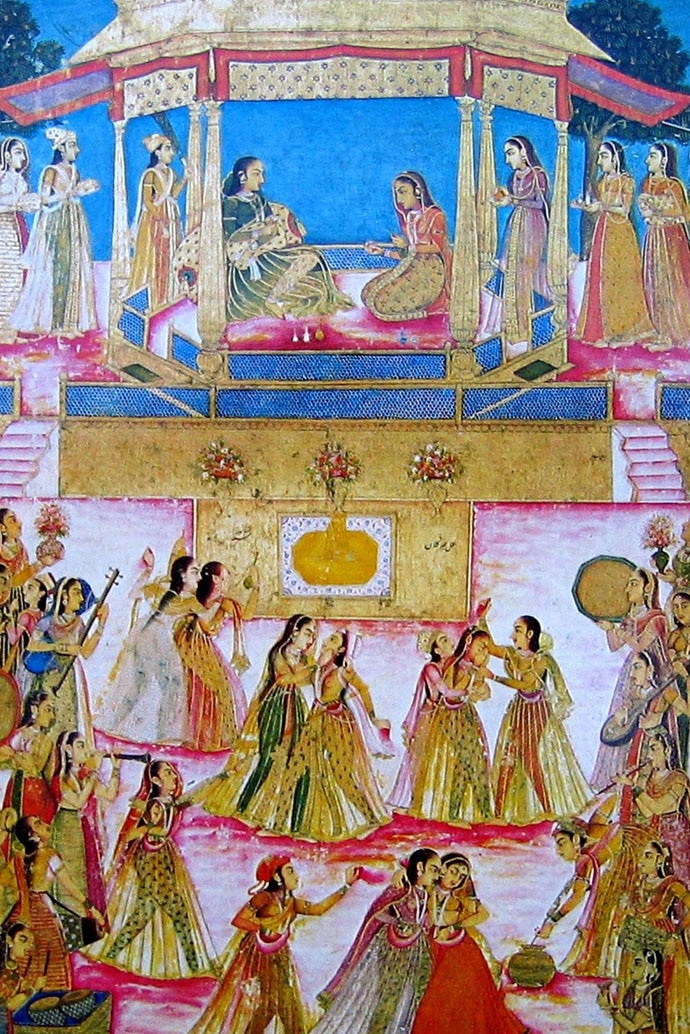 From emperors, let’s move to the Sufis — the medium through which Islam really spread in the subcontinent. It was said that Nizamuddin Auliya, the Sufi saint of Delhi of the Chisti order, was fascinated by the colours made from flowers during Holi. He lived between the 13th and 14th centuries in the era of the Sultanate that precedes the Mughals.

His greatest follower was musician, writer, composer Amit Khusrau, the inventor of a new language, whose grave also lies in the compound of the Nizamuddin dargah in Delhi.

The qawwali composed by Amir Khusro, sung by many great singers over the years, can be remembered for the word “Aaaj Rang Hai Re”. The lyrics he penned down evoke not just the colours of Holi but also the birthplace of Lord Krishna. Another great Sufi, Bulle Shah, also has a verse that says: “I will play Holi beginning with the name of Allah.”

The Sufis were using the magnificent colours and light of Holi to express their own devotion. The last nawab of Awadh, Wajid Ali Shah, created art and new forms around Holi. It was under his patronage that the unique Lucknow gharana of Kathak evolved. He was utterly enchanted by the legend of Krishna and Radha playing Holi and at the age of 21, Wajid Ali Shah wrote his first play called Radha Kanhaiya Ka Qissa. The Lucknow gharana would produce a wealth of thumris and to date, we celebrate Holi in Benaras and Awadh with musicians singling and playing these thumris.

(The British would depose the last nawab on grounds of being a debauched ruler who was just engaged in the arts).

He was indeed a colourful character, utterly immersed in dance and music and a fine poet and writer himself. He celebrated festivals like Saawan, Holi and Basant Panchami with great pomp. His court dancer-musician, Pandit Thakur Prasad, would teach him Kathak and the dancing duo of brothers, Kalka and Bindadin Maharaj, were also appointed to his court — Kathak maestro Pandit Birju Maharaj, is a descendant of this family.

Finally, let’s fast-forward to more recent times when popular culture began to be defined by Bollywood. Let’s remember the Mehboob Khan classic Mother India made in 1957. Put on the wonderful song 'Holi Aiye Re Kanhai' from the film.

The lyrics are by Shakeel Badayuni, the music is by Naushad.

Happy Holi. To us.