When Monica Lewinsky says women need to tell their stories in their words, I can't agree more. I, too, faced media trial in January 2014. It's still going on.

From CNN and BBC to major channels in Pakistan and India to unknown media houses, on January 17, 2014, and later, countless journalists approached me. Shattered, I was in news in many parts of the world.

In those few days and later, I sat frozen in my room, with just one thought in my head: I wish I was dead. 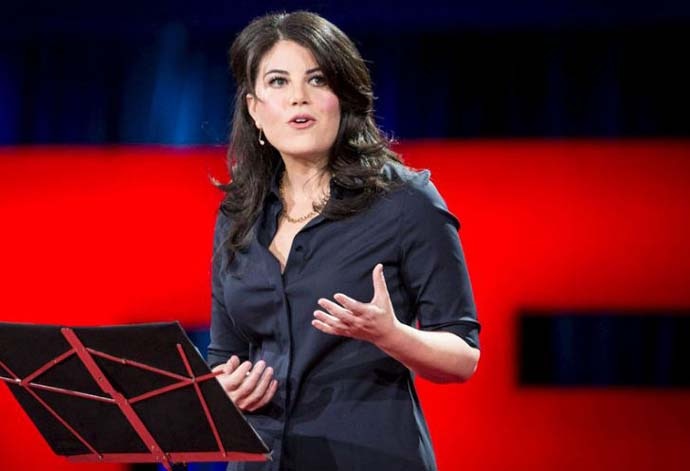 In a 2014 speech to the Forbes 30 under 30, Monica Lewinsky, 41, said that she was "the first person to have their reputation completely destroyed worldwide via the internet."

In 1998, there was one thing that became a constant refrain in Lewinsky's head: "I want to die."

Today, at 45, Lewinsky is a London School of Economics psychology major, a Vanity Fair contributor, a motivational speaker, and an activist for online bullying and abuse. The first person to ever be publicly shamed on the internet, Lewinsky, is dedicated to extending a comforting hand to all those who face online abuse.

Among its executive producers is Jemima Khan, a woman known globally for raising her voice for the persecuted. Garnering mixed reviews, what The Clinton Affair has managed to do is shift the focus of the story from Monica Lewinsky to Bill Clinton.

The global headline of "the Lewinsky Affair", showcasing the story of sexual improprieties of a sitting American president that also almost brought his presidency to its knees, leading to his impeachment, was a manifestation of societal and cultural attitudes that were stark and discriminating in 1998, and haven't changed much in 2019: it is the woman who is to be blamed and judged and bracketed and abused and ostracised and stoned.

Lewinsky looks back at the 22-year-old Monica in The Clinton Affair: "He [Clinton] paid a lot of attention to me. He spent time, sort of, standing there, and held my hand longer than he should have, and gave, what the others had described as, the 'full Bill Clinton'. It feels as if you are the only person standing there."

Lewinsky says, simply: "I fell in love with my boss... It was my everything."

Lewinsky was 22, an unpaid intern, and her boss, 52, was the Commander-in-Chief, and the president of the USA, and the most powerful man in the world. In the two years of their liaison, Lewinsky waited for it to take the next turn as he talked to her on the phone, had phone sex on multiple occasions, gave her compliments and gifts, had numerous sexual encounters with her in a secluded study in the White House, and promised to give her a job in the White House in his second term. On one occasion, when she left the White House, her blue Gap dress had tiny white stains: semen of the president of the United States.

Lewinsky thought she was in love. Clinton had no name for what he did.

In The Clinton Affair, Lewinsky says: "Maybe he just did all of these things these last six months because he was trying to keep me quiet during the election. How stupid am I that I believed this, that I bought this? I felt so deflated and so desperate. And those were the conditions, along with some other things, that led to me confiding in Linda Tripp."

Linda Tripp, a former US civil servant, and apparently a friend of the much younger Lewinsky, had a 20-hour audio recording of her very private conversations with Lewinsky. Tripp's sinister role in the destruction of Lewinsky's reputation and life is something that defies most norms of decent behaviour in a world full of deception and betrayal. Lewinsky says, simply: "I fell in love with my boss... It was my everything." (Photo: Reuters)

I remember following in bits and pieces the saga of Lewinsky-Clinton in 1998, and what I remember the most was the media presentation of Lewinsky as the fallen woman. A caricature of a woman with no morals, no conscience, no fear of consequences. What I remember is the mainstream ratification of inherent sexism and misogyny in terms that today are at the receiving end of a global rebuke: slut-shaming, fat-shaming, looks-shaming. What I remember is that the entire blame of the affair was transferred to the 22-year-old intern, ascribing motives to her actions, finding skeletons in her past, making her a butt of media and public mockery, while shrugging Clinton's actions as just another nothing in his long list of alleged and proven womanising and extramarital peccadilloes. What I remember is feeling mortification for a young woman as every little private detail of her never-to-be revealed affair became global headlines after the Drudge Report broke the news online.

The new era of populist, aggressive, in-your-face online news-breaking before the world was hooked to 24-hour television that needed much more than news and analyses and interviews to keep its audiences riveted, changed the world in ways good and harmful. After the refusal of Newsweek to publish the Clinton-Lewinsky story, the Drudge Report published it breaking "the fraternity of the guardians of the culture." The repercussions of that story are now stuff of American history.

While Clinton had a very narrow escape from impeachment and finished his second term with his approval rating jumping 10 points to 73 per cent, Lewinsky's life came to a full stop. Only now she wore a scarlet letter. It shadowed her everywhere, through media name-calling, mockery, character-shaming, Lewinsky-jeering skits on late night comedy shows, and in lyrics of pop and rap songs.

Today, in the time of Me Too and Time's Up, Lewinsky's affair with Clinton, for which she underwent years of pain, remorse and shame, is a study in the abuse of power, of a gross imbalance of power. Going beyond the morality of sexual involvement with a married man, causing pain to his wife and family, and the recklessness about personal wellbeing, the most noticeable phenomenon regarding Lewinsky's liaison or relationship or affair is the very public media trial of an individual's private act. The media trial, brutal and raw, exposed in all its garish ugliness the different barometers for male and female behaviour, in this case, more so, as the male entitlement even had a White House seal.

Hillary Clinton, the stoic wife, during the very public unravelling of her marriage, was portrayed as a cold, calculating partner-in-crime for whom keeping the lie of the marriage was more important than holding her husband accountable. When Hillary in October 2018 speaking to Today said that it wasn't an abuse of power as Lewinsky was "an adult", in the criticism that followed her remark, what is lost in the noise is her decades of silent pain. Keeping a straight face during the very public disintegration of your marriage, not falling apart in front of the staff of the most famous address of the world, and not letting your emotions become a topic for salacious media and public speculation, Hillary did it all, and that too for a long time.

Talking to CNN in September 2016, Hillary said: "It was really hard. It was painful. And I was so supported by my friends; my friends just rallied around. They would come. They'd try to make me laugh. They would recommend books to read. We'd go for long walks. We'd hang out, eat bad food. Just the kind of things you do with your friends."

Bill Clinton in that 1998 TV appearance that the entire world watched said: "I did not have sexual relations with that woman, Ms Lewinsky."

A few months later, he said: "Indeed, I did have a relationship with Ms Lewinsky that was not appropriate."

Bill Clinton, in 2018, said on Today: "I have never talked to her. But I did say publically on more than one occasion that I was sorry."

Once Clinton said: "The suggestion was that I never apologised. I did. I meant it then. I meant it now." Hillary Clinton came across as the calculating partner-in-crime for whom keeping the lie of the marriage was more important. (Photo: Reuters)

Those who have faced a media trial understand the agony of being forced to wear a scarlet letter. Not even remotely close to what she went through, but in my own little way, I understand Lewinsky's pain better than most people. To have something very personal turn into a public spectacle, to be judged, to be abused, to be shamed...

It is surreal to hear Monica Lewinsky's words, to read about her pain. I know what she is saying. I feel her pain. Today, I feel I am not the only one. The story of Monica, not Ms Lewinsky, helped me to finally come to terms with the very ugly online abuse and media trial that was unleashed on me one January night in 2014. It won't ever completely heal, but I feel a sense of peace now.

In Monica's own words: "Throughout history, women have been reduced and silenced. Now, it's our time to tell our own stories in our own words.

What feels more important to me than whether I am owed or deserving of a personal apology is my belief that Bill Clinton should want to apologise. ...I'm less disappointed by him and disappointed for him. He'd be a better man for it...and we, in turn, a better society.

Filming the documentary...[exceedingly painful, traumatic] forced me to acknowledge to myself past behaviour that I still regret and feel ashamed of...

Despite all of the ways I tried to protect my mental health, it was still challenging. The process of this docu-series led me to new rooms of shame that I still needed to explore and delivered me to my Grief's doorstep.

If I were to see Hillary Clinton in person today, I know that I would summon up whatever force I needed to again acknowledge to her sincerely how very sorry I am.

I hope that by participating, by telling the truth about a time in my life-a time in our history — I can help ensure that what happened to me never happens to another young person in our country again."

Also Read: Why Kamala Harris for US President: The world must root for this candidate in the US presidential battle

Post your comment
#Bill Clinton, #The clinton affair, #Monica Lewinksy, #Media trial
The views and opinions expressed in this article are those of the authors and do not necessarily reflect the official policy or position of DailyO.in or the India Today Group. The writers are solely responsible for any claims arising out of the contents of this article.