Thomson Reuters Foundation’s survey of 548 experts on 'women’s issues' needs to be taken with a pinch of salt.

Is India the world's most dangerous country for women? I disagree — vehemently. Firstly, it would be erroneous to call an opinion poll a survey. The Thomson Reuters Foundation "survey" is unnecessarily misleading and sensational.

A survey of 548 experts conducted to assess the safety of women across 195 countries — that’s two "experts" on women’s issues per nation — can at best be described as an opinion poll. And opinions or perceptions are based on the flow of information. Secondly, how exactly does the survey describe "women’s issues"? Is safety really a "women’s issue" alone?

The survey/opinion poll mentions the gang rape of a 23-year-old physiotherapy student in 2012 who later succumbed to her injures. The incident sparked a wave of unprecedented protests against the state, demanding death penalty for the rapists. So much so that the political class was forced to run for cover as the protests went on for days. 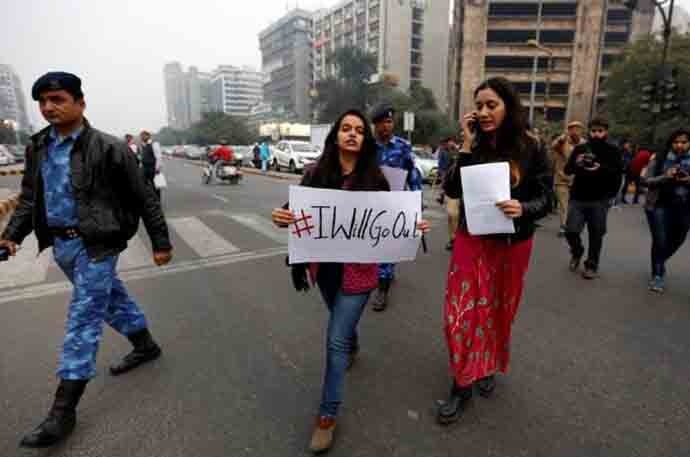 Women take part in the #IWillGoOut rally, organised to show solidarity with the Women's March in Washington, along a street in New Delhi. (Reuters file photo)

Women and men across different age groups came out in solidarity venting their anger, just 2km away from Parliament. Right in the heart of Delhi, roads were taken over by protestors and when the police used force to control the protesting crowds, the citizens of the country — both men and women — fought back with vengeance.

The young student’s gang rape shook the collective conscience of the nation and we expressed our anger. The media reported every gruesome detail of the incident.

I was nearly seven months pregnant at the time and had a meeting at the Le Meridien Hotel in New Delhi. The December cold was biting and because every possible road leading to the hotel was blocked, I decided to walk down. It was an important meeting which I didn’t want to reschedule or cancel. Most of these things would be unthinkable to do in almost all middle-eastern countries. [Representational images]

It was a 20-minute walk. As I navigated my way to the hotel through a sea of protestors, I was a bit worried and intimidated too as I could see as many men as women.

So there I was, waddling away, absorbing the sights and sounds of the great Indian democracy on full display. I walked slowly and carefully and soon realised that several others around me were equally, if not more, careful.

However, I reached my destination without anyone making me feel uncomfortable. Perhaps there were too many cops but then getting eve-teased/molested at a protest against rape would have been a real travesty. (Or maybe I just looked intimidating enough.)

I'm mentioning this incident because I had perceived the situation to be an unsafe one — based on my past experiences and experiences of others. But in reality, the story turned out to be different.

In hindsight, now I also know that such a massive protest is a privilege that we Indians have earned. In Singapore, for instance, a gathering of more than two people can land you in jail, leave alone a mass protest.

The reality is that my experiences across countries have been quite similar when it comes to women's safety. I have been stalked for nearly 20 minutes on the streets of Manhattan in New York. Fleeced by a taxi driver in Poland who not only overcharged, but also took a long-winded route. Eve-teased by a waiter in Berlin. Got kisses blown at in Italy.

In fact, one of the cities I have felt extremely safe in is Mumbai. I clearly remember, as a 22-year-old reporter, I didn’t have the patience to wait for an office drop after work and decided to take a cab at 3am from Worli to Bandra. We would regularly take the local train at night — and not always in the ladies compartment. We went out at night. Went for walks on Bandstand. Took autorickshaws at midnight to wish friends on their birthdays.

Yes, I am aware of my privileges. But I just want to say that most of these, in fact, all of these would be unthinkable to do in almost all middle-eastern countries, which fared better than India in the latest Thomson Reuters Foundation "perception" survey. Or for that matter even our neighbouring countries.

I also remember turning down an invitation to visit Prince Mohammad Bin Fahd University because the dress code seemed oppressive. I was told that a journalist who had travelled earlier with the then prime minister Manmohan Singh was detained because her headscarf had slid down to her shoulders.

India is fighting its own battle with violence against women — whether it is female infanticide, sexual crimes, crimes of passion, trafficking, child rapes. But it is doing so in full view. NGOs, journalists, activists, artists are constantly calling out the misogyny and patriarchy every day.

Indian laws are evolving. Sensitisation and training for better handling of crimes against women are in the process. Yes, not as fast or with the urgency as it ought to be, but India is aware and mindful. Most importantly, it is fighting this battle fair and square with no holy cows and blanket bans on information outflow.

My work as a print journalist takes me to the nooks and crannies of India sans a big camera or a crew. I have driven along the roads in Punjab at 2am and walked into homes of strangers, travelled along with a drunk driver in the hinterland of Uttar Pradesh; walked up to strangers for a chat, have fought back, or stared back, or pretended to call the cops as and when the situation has demanded.

Yes, it has been challenging. But it has definitely not felt like the most dangerous job in the world – being a woman in India.

Also read: No, India is not the world's most dangerous country for women

#Rape, #Crimes against Women, #Women's safety, #Thomson reuters report
The views and opinions expressed in this article are those of the authors and do not necessarily reflect the official policy or position of DailyO.in or the India Today Group. The writers are solely responsible for any claims arising out of the contents of this article.