Responding to an intellectual’s opinion about the Indian Armed Forces

From wars with other nations to our internal conflicts, the military has done a stellar job.

I recently read an old article for DailyO by Mr Mohan Guruswamy, in which he asks when will India “stop rewarding incompetence” in the military. Mr Guruswamy has tweeted a similar opinion again recently.

When i first published this it kicked up a bit of a storm in many a teacup. I haven't changed my views as little seems to have changed. Mediocrity rules.MOHAN GURUSWAMY:Military Incompetence. Who will bell the... https://t.co/RUceBZhQWO

In his DailyO piece, he had mentioned that the upper echelons of the military are “now visibly dense with incompetent and uninspiring leaders”. He ended the piece by asking as to “who will bell the cat”.

I am belling the cat. 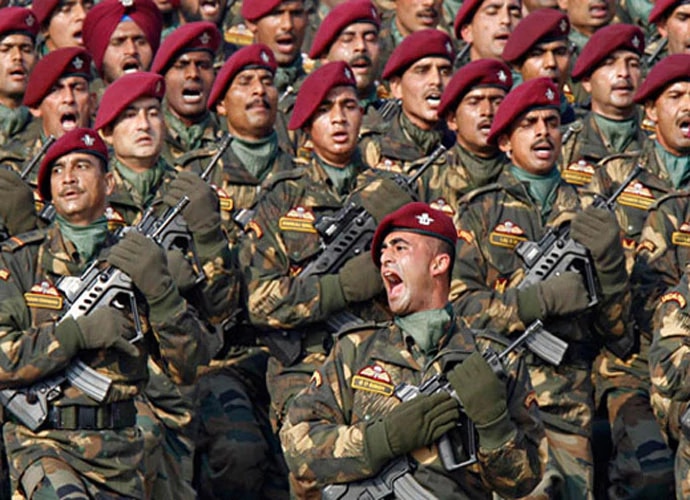 The performance of the men in uniform makes every Indian proud. (Photo: Reuters/file)

I would like to point out that his article is outdated. It quotes extensively from World War II and from incidents and events in the US Army. USA has made a habit of branding glaring defeats as victories. In fact, in every defeat, there is always a discord between the seniors and the juniors. Hence, churn, turmoil and outpouring in the junior ranks is normal there. Mr Guruswamy will get far greater insights on leadership from the book Crisis in Command, which officers of the Indian Army read like Bible.

On the other hand, may I point out that barring 1962, when we went to war due to political ineptness, and when we entered Sri Lanka without clear political objectives, the performance of our military has been superlative.

Their performance makes every Indian proud. J&K would not have been with us but for the prompt action in 1947, Bangladesh would not have been born in 1971 but for our performance. In military terms, it was superior to the German Blitzkrieg. We remain the only military who created a modern democracy successfully. I’m sure people have not forgotten the last official firefight we have had — Kargil. Pakistan has never recovered from that. Not to forget the very recent Doklam. The international poser was how to find a way to save the Chinese face. The surgical strikes were so severe psychologically that Pakistan still refuses to acknowledge them.

Look at the internal dimension. I have been in the North East for over five postings from Lieutenant to Brigadier. The sea change from extreme turmoil to peace that has taken place there has been enabled by the Armed Forces. The Army has taken the Government to the people and ensured it functioned there. I can quote any number of examples. If today, the North East turmoil has subsided, I am sure most will agree that it was not due to brilliant political and social ventures alone.

Look up J&K. Despite repeated political miscalculations, muddling and the vacuum of resultant abortions of normalcy, that state has been held together as part of India. Despite, hostility encountered on streets daily, the Indian Military is managing the conflict and keeping it within control with more than one hand tied behind its back, ever since I have known it. I do wish that some of these opinion makers who pontificate from glass structures face stone pelters with one hand tied down and then make opinions.

Does Mr Guruswamy think that all this would have been possible without the involvement of officers at the highest and lowest levels? Men must be led into action by officers if there is to be success. Junior officers must be guided by their seniors, who are Generals. Do not forget that these Generals were once junior officers sharing the privation of men and leading them in action.

Speaking from personal experience, during the Kargil conflict, extensive operational plans were made in the division and conveyed to us Commanding Officers. The GOC openly told us that if we had any reservation about the plans, we were free to air them, and modifications would be made. We did air them, they were discussed out. The GOC gave out his final plan after that and that was it. Executed.

Later, when I was a Brigade Commander in the North East, I sincerely felt that whatever I achieved there could not have been possible without my men and my junior officers. More importantly, some of my actions did not suit certain vested political interests. My Divisional Commander, My Corps Commander, Army Commander and COAS stood behind me and guided me to continue doing the right thing.

Yet, I am glad that we are being shown a mirror. It will only be a reinforcement of commitment to the cause for all those who are in uniform now and are wearing stars on their collars. Please understand that men in uniform have surrendered their basic right to speak to save people’s constitutional right to speak. I have only recently regained mine. I can assure everyone that any scathing comment will be taken positively by these serving Generals, Admirals and Air Marshals, with the intent to improve. The Indian Armed Forces has the heart to learn its lessons. We learnt it from 1962 and the IPKF ops. We will learn it from our countrymen also. We will emerge better.

Mr Guruswamy has quoted a couple of examples from 1965 and 1971, where officers have risen to high ranks despite shortcomings. One will always find exceptions in every walk of life and the Armed Forces are no different. In fact, it is the exceptions which prove the rule. There is no evidence that promising junior officers are nipped in the bud and that only the unintelligent ones with good confidential reports (CRs), who can manipulate the system, grow in the Armed forces. If that were true, many Generals who have delivered goods would have been superseded. I rose in ranks because my seniors tolerated my mistakes and aberrations. They educated me to read, think, speak and write on matters military and beyond. I am not the only one. All our General Officers will vouch of similar experiences. I’m sure people have not forgotten the last official firefight we have had — Kargil. (Photo: India Today)

Incidentally, most of our Generals are post graduates, M Phil degree holders and PhDs. I am yet to see a promising young officer being nipped in the bud, unless he has some chronic character deficiencies. In any case, the steep pyramid at the top culls out the second best.

I think India should be very happy that we have only “dense and unintelligent” Generals. Look across the border, there are highly intelligent Generals with brilliant minds who lost half their nation in 1971. They are now busy delivering what’s left of their nation in perpetual debt to China. That inspiring General who came to Agra and upstaged our statesman Prime Minister so distastefully is in exile facing charges of treason. I thank god that Imran Khan’s clone propped by the Indian Army is not my Prime Minister. Our dimwitted, poorly paid generals have silently and uncomplainingly contributed to the integration, consolidation and growth of our nation into the sixth largest economy of the world. Thank god for small mercies.

One might be an intellectual, but he is not the only one. For an intellectual a fool is a fool. For a fool, the intellectual is the fool. It depends which end of the prism you are looking at from. Who is to judge?

When I was penning these thoughts down, I read some tweets of Mr Guruswamy and learnt something about his persona. He has a daily and an hourly opinion on many issues, from Hema Malini to the Indian Army. That’s his right to free speech and he is exercising it. However, I am thankful that he is in a pitiful minority regarding military leaders. It is not without reason that India feels that the Military is the most trusted institution in India. Is it possible without able leadership?

If Casablanca had been an intellectual, he would not have stood on the burning deck. The boy stood on the burning deck, and so are the Indian Armed Forces.  I am proud to have donned the uniform of the Indian Army, which is internationally respected.  Mr Guruswamy can hold his opinion about all of us, any way he thinks, any number of times. We heartily reciprocate it.

Has the cat been belled?

#Doklam, #Surgical strikes, #Kashmir, #Indian armed forces
The views and opinions expressed in this article are those of the authors and do not necessarily reflect the official policy or position of DailyO.in or the India Today Group. The writers are solely responsible for any claims arising out of the contents of this article.