Mohan Bhagwat is right. Indian Muslims like me are so happy they just can't handle

Don't send more happiness our way. We don't know how to deal with it anymore.

I write to you to thank you for highlighting yesterday, October 13, that Muslims in India are the happiest.

Indeed, we are. We have been saying it for long but nobody wants to listen to us. Our hearts are literally bursting with joy. Frankly, it is becoming quite difficult to deal with it now.

We were happy when Pehlu Khan and his son were beaten up by cow vigilantes on the highway and the entire incident filmed on camera. We celebrated when each of the accused, clearly visible in the video and named in Khan's dying statement to the police, was acquitted and his son charged with cow smuggling. Sorry we didn't burst any crackers. There is too much pollution in Delhi already. We actually threw a party when Shambhulal Regar hacked and burnt Mohd Afrazul to death filming the incident and threatening the entire Muslim community with dire circumstances if they ever dare to even "look at Hindus". And when he was offered a ticket to contest the Lok Sabha elections by Uttar Pradesh Navnirman Sena, trust me, we cried, and they were tears of joy the likes we had never experienced before.

Remember Mohammad Akhlaq? The man who was dragged out of his house and lynched to death for daring to keep meat in his house?

His family is also very happy. You can see it on their faces, can't you? Out of the 18 accused, 17 are out on bail. One died in custody. His body was draped in the Tricolour. We were very sorry for him. We cried bitter tears but again were so so happy when Mahesh Sharma, Union minister and Lok Sabha lawmaker from UP attended the funeral. But we really went batshit crazy with joy when Hariom Sisodia, one of the accused, contested the Lok Sabha elections. You know how it is with us. It has always been difficult for us to contain our happiness.

Junaid? Sheikh Naim? Mohammad Qasim? Asgar Ali? Hafizul Sheikh? Some very silly people say they were lynched to death. They have malicious intentions behind spreading rumours about our great Indian society, we know that. But do you know what actually happened? Well, I'll tell you. They all died of happiness. Their hearts just stopped one day. The post-mortem report had one very important line.

Cause of death: Heart burst due to intense happiness.

Now, look at this Shahista Parveen, wife of Tabrez. Remember Tabrez? His story of joy is not from too long ago. It was only in June that he was lynched. Tied and beaten up. Forced to chant Jai Shri Ram. I mean as a happy minority in this country, he should share some joy with the majority too, don't you think so? He was smart enough to know that, so he did exactly what they said. Then the police turned up and took him for sightseeing. They wanted to show him the town, have tea with him, maybe some samosas with green chutney (I personally prefer the red one though). 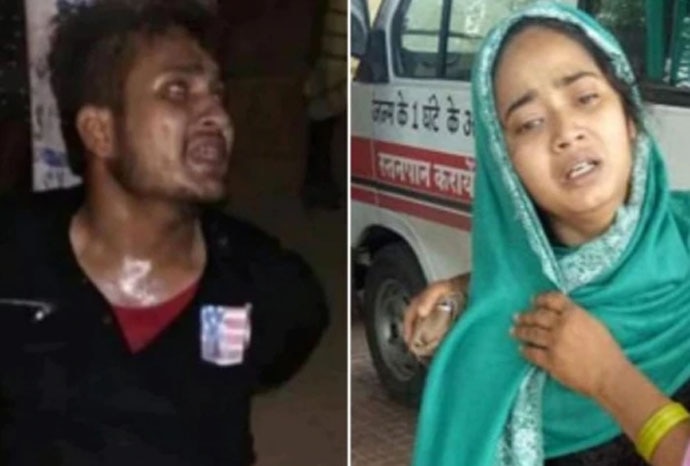 Shahista Parveen threatened to commit suicide if the perpetrators were not brought to justice. Silly! (Source: Reuters)

When he was finally taken to the hospital, he died of a heart attack. A heart attack that was obviously not caused by the beatings he took, duh uh! Therefore, the murder charges were dropped. So Parveen threatened to commit suicide if the perpetrators were not brought to justice. Silly! So silly! I mean which woman doesn't want her husband to go as happy as Tabrez did? When this news came out, Twitter was overflowing with love for her. Someone offered to give her the rope for her noose. Another told her it would just be one womb less to give birth to a terrorist. It was absolutely beautiful. You should have been there with us when we went through all those comments, ooh aahing over the goodness of it all.

You know every time we are asked to prove our patriotism or asked to go to Pakistan, we offer a special namaz to thank the Almighty for small favours. Every time we and our kids are called terrorists, we actually hold lavish dawats. All shudh shakahari food. (Pssst… we don't want to keep meat and get more of your love. We have it in abundance already!)

Rape and death threats are issued to us on social media often, yet it is our accounts that are suspended and then police cases are filed against us. Every single time we are told we would be ethnically cleansed, when people refuse to rent out flats to us, when our men are picked up from our homes, charged with terrorism, kept and tortured in jails only to be acquitted some 10-15 years later due to lack of any evidence against them, we light up our houses, we sing and dance in the streets.

And don't even get me started on Gujarat. Or Moradabad. Hashimpura. Meerut. Etc. Etc. I won't be able be pen a decent letter to you, I would be so overcome with emotion.

So thank you, Bhagwat ji. Thank you for all the love and happiness all these years.

Thank you for reminding us that Bharat is 'Hindustan, Hindu Rashtra'. You see, we were getting delusional due to all the happiness and thinking it was a secular state that gave equal rights to every religion under law.

Thank you for setting the record straight.

Thank you Mohan ji, but now, we will have to refuse more happiness that you might send our way. We don't know how to deal with it anymore. We will go mad. We are going to be content with what we have, I promise.

#Lynching, #Tabrez ansari, #Mohan Bhagwat, #Indian Muslims
The views and opinions expressed in this article are those of the authors and do not necessarily reflect the official policy or position of DailyO.in or the India Today Group. The writers are solely responsible for any claims arising out of the contents of this article.