IndiGo staffers were wrong to attack, but so was the passenger

We in India have made it a habit to insult service providers caring little about their dignity.

I have been part of the hospitality industry for almost two decades now and have seen a zillion patterns of behaviour emerge out of a large smorgasbord of people on both sides of the fence - service providers and service seekers.

The set of service providers - chauffeurs, valets, housekeeping attendants, waiters, bell hops, baggage attendants and so on - have always been in a ready-to-serve stance with a smile plastered on their faces.

While in the west or even far east and far south-east down to Australia and New Zealand, the service providers can afford to be chummy, joke back and forth with us, be somewhat casual, address us as "love" or "darling" and feel not too less of an equal than us; in India we are still stuck with the Raj mentality. 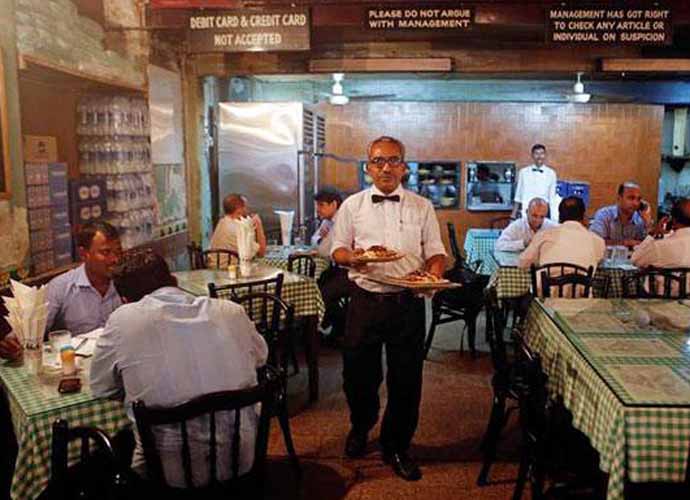 The goras were ousted about 70 years back but they left behind brown sahibs and their nakhra-rich memsahibs. The caste and class consciousness is such an ingrained trait in our collective DNA that guides our behaviour when we come in contact with those we think our above or below us. We seem to, still, abide by the corporate unspoken/unwritten rule of "kissing the person above us on the corporate ladder and kick the one below".

When we Indians demand service, we are just not content with the excellence in the product we are about to enjoy. We also expect the service provider to kowtow, bend over some more and do that little "Yes sir, yes sir, three bags full" dance around us.

This is what generally happens in restaurants. We will get our frame upright, cock up and slant our face a bit in order to get that condescending pose we have perfected, reach deep down to bring out our most effective baritone, click two fingers and boom in a loud voice, "Hey you, waiter" .

At which point the liveried man in white will give a double bow, bob his head a bit, smile a forced smile and rush to our table to offer us his services. We will let him stand for as much long as we take to mull over the menu or discuss silly choices with our friends at the table. All along, the waiter, with one hand behind him and the other raised half way horizontally for the napkin to hang from, will wait patiently and as subserviently as he can. Each time this ludicrous scene takes me back to Downton Abbey. We in India (particularly in the north though people in other regions can be accused of this grossness too) do not think of service providers as people with dignity engaged in various professions. To us, all service providers - from guards to delivery chaps, from housekeepers to gardeners, from restaurant stewards to those in airlines, from telemarketers to drivers - are our personal servants. And they ought to be treated with disdain and superciliousness. We opine that they should be kept in their place which is far, far beneath us.

In the recent IndiGo staff and passenger scuffle case, the airline staff had erred big time. In fact it is scary and disturbing to see that employees of a known brand would stoop to such levels. Good that the severely errant staffers are being strongly warned and kicked out of their jobs and now will find it difficult to find a new job with their faces so recognisable. A big lesson presents itself for a whole lot of people out there. Customer is king or queen and it is hugely wrong, unprofessional and unethical to behave in such a manner with a customer.

But what about the other side? Yes, the one from where the customer dishes out unpalatable, many a time difficult-to-bear and smile-back-at, abominable behaviour. As customers we cannot go about abusing people and throw our obnoxious attitude around. Apparently, the IndiGo flyer had abused the staff to begin with.

While we cannot condone how the Airline staffers have misbehaved in the worst imaginable way possible, we need to look within ourselves too. As white-collared, educated, affluent people of privilege, we cannot walk around assuming that we are above others and rule those who serve us.

Rajiv Katyal, the customer, as most news reports are telling us, was uppity and abusive. Even in the viral video, he is seen saying "Tu apna kaam kar" when being asked to move. It seems he took affront at being told to move by the staff and even during the struggle, he punches and uses colourful language to get the misbehaving, boorish men off him.

As for the staff members, yes they were clearly in the wrong. It was not their home ground, they were in uniform, on duty and representing a brand and themselves as brand ambassadors. When you are in the service industry you do not get down to fisticuffs even when abused. But these were young, hot-blooded, men with criminal intent, who should not have been hired in the first place.

Still, as people more privileged and educated, we must know how to behave with others, especially those much beneath on the societal ladder to us.

Himmat Anand, the founder of Tree of Life chain of hotels, conveyed a strong point in his half-jestful post where he says, "While finally boarding my flight just now, after a delay of 2 hours, I thought I'll also say "Fuck Off" and see what happens. I decided against it, because Apnee izaat apnea haath mein hoti hai." (It is in our own hands how we command respect from others).

Nikhil Taneja, a creative producer with Yash Raj Films, made an extremely pertinent point, "Regarding the #IndiGo incident: I don't know both sides of the story and I completely condemn any violence for any reason. Having said that, I will use this occasion to talk about one thing that gets to me: our behaviour with customer support staff in India."

Regarding the #Indigo incident: I don't know both sides of the story and I completely condemn any violence for any reason. Having said that, I will use this occasion to talk about one thing that gets to me: our behaviour with customer support staff in India. #thread

A few years back, our next door neighbour caught a maid picking leaves from the curry leaf plant opposite their house. The two ladies of the house came down heavily on the maid, calling her a thief and hurling abuses at her, using B**** and its Hindi alternative several times in their tirade.

The maid retaliated using equally colourful expletives on them, raising her pitch to match theirs. Most people around, from the same social strata as the neighbours, tsk-tsked and rued about the degradation in this serving class of people and lamented how they had learnt to talk and answer back.

For the sahib class, it seems, it is okay to ride roughshod and play the part of lord and masters. But if the "lower" strata stands up for their right or respect or dignity then they really have done something extremely wrong in our eyes.

We in India are really the doyens of double standards. What's good for us and is allowed to us is never so for the minions we employ or get services from.

About six months ago, our gardener came to us one late evening with his face hung low. Upon enquiring, he told us that he had been thrown out of the colony because an RWA member had reported against him.

"What did you do?" I asked him. He said he was asked to carry out a certain task by a lady member who was in-charge of the gardeners. Radhey Shyam, the gardener, refused saying that he would not be able to do it. She lost her cool and rebuked him. He answered back, to which she seethed with rage and said, "I'll beat you with my shoe." The fellow was aghast and turned rude in order to salvage whatever self-respect he could. The lady reported him to the RWA president, breaking into tears midway. The association collectively decided on who the villain and who the victim here was.

As expected of a one-sided jury, the gardener was given another verbal lashing and thrown out of the job. When he approached us, we intervened and conveyed to the RWA that we vouched for his work, honesty and character. The president relented but only after making the gardener apologise again and giving in writing that he would never misbehave regardless of the provocation.

For the gardener survival came much before dignity, so he played along in our lop-sided game of justice and got to keep his job. While we were grateful to the RWA for listening to us, we were left with a heavy heart; once again we had let our class bias rule over our logic, reasoning and wisdom. Why do we feel that we are more righteous than those below us?

Why do we empathise with our own kind with such ease? Why are we not balanced in our approach? Why must we hasten to accuse the people standing on the lower rungs?

Why are we alright with being rude and obnoxious with those who provide us services, thinking that they are born to serve us? But should the same treatment be meted out to us, even in the tiniest of measures, then all hell breaks loose and we demand respect, command submissiveness and force out apologies.

Swapan Seth, the owner of advertising agency Equus, says it well, "We are, as a bunch, rather rude with service providers: hotels, restaurants, airlines, banks, telco companies. But they are human. And sometimes they too lose it."

Rajiv Katyal, the IndiGo flyer, apparently told the airline staff to "f*ck off" a few times, besides using a few more cuss words. While, the staffer has been terminated, I would also like to know how Katyal is being pulled up for being abrasive and abusive. I hope his father or mother or wife had given him one tight slap and taught him basic etiquette and propriety of behaviour.

Many people debating the issue on the social media are saying what's the big deal about shouting FO? We, as English-speaking elite use it as a casual slang all the time.

Perhaps, it would be, then, okay if a service provider turned back and said to us, "You f*ck off, sir"; aided with a smile and appended with that all-important suffix, "sir".

#Service providers, #Hospitality Industry, #Civil Aviation, #Indigo Airlines assault
The views and opinions expressed in this article are those of the authors and do not necessarily reflect the official policy or position of DailyO.in or the India Today Group. The writers are solely responsible for any claims arising out of the contents of this article.