How terror handlers are trying to expand beyond the Pir Panjals

As northern part of Jammu and Kashmir is getting largely free of terror outfits, the terrains in south Kashmir are now proving to be more lucrative for sustained militancy

On Thursday, a popular BJP leader from Kishtwar — Anil Parihar and his brother Ajit — were gunned down by suspected militants. The brothers were shot near their home in the Tapal Gali Mohalla when they were returning from their shop.

This is not an isolated incident. Earlier in the year, intelligence agencies have warned that Pakistan was resorting to cross-border firing along the area to assist infiltration. The terror handlers and their masters were keen to expand the ‘arc of terror’ to areas south of the Pir Panjal range in Jammu region.

Over the last decade or so, security apparatus have been largely successful in combating terror in the Jammu region. So much so, that off-late the Jammu-Srinagar highway — especially the south of the Jawahar tunnel — remains mostly incident free and under control during the time of the Amarnath Yatra. Other than the Sunjwan Army Camp attack earlier in the year, there have been less than half-a-dozen serious incidents in the region. Electronic surveillance, better human intelligence, proactive checking of infiltration, and policing are some of the major reasons behind this relative peace. An Indian army soldier takes his position in an orchard near the site of a gunbattle with suspected militants at Kachdoora village in south Kashmir's Shopian district (Credits: Reuters).

Intelligence agencies spoke of a 'terror audit' in Pakistan, the reports came around mid-August. The handlers of ISI were apparently not pleased with the performance of their 'wards'. Reports suggested that almost three dozen local commanders of terror launch pads were replaced by tanzeem heads. This happened to both — Lashkar-e-Taiba (LeT) and Jaish-e-Mohammed (JeM) groups. The new commanders have been given three months to perform or perish. Probably, the substantial toll that Operation All Out extracted (almost 200 terrorists gunned down since August 2017), increased vigil, and active denial of infiltrators prompted this change. Winter will now set in about a month, making the higher passes inaccessible; it is already snowing in the upper reaches.

The Jammu region has seen a revamping of modus operandi by the terror handlers. There is very little infiltration and even lesser exfiltration. So, the earlier design — of training local boys in Pakistan-occupied Kashmir (PoK) and pushing them back in — is passé. The terror handlers now are pushing in terror trainers to train local boys — mostly Hizb recruits. The Jammu region has seen a relative hike in the number of terrorists — or over ground workers — arrested with a substantial cache of arms and ammunition. This is especially true in the past few years.

There are some innate advantages that south Kashmir affords for sustaining militancy. This is probably why it is emerging as the hub of ‘new-age-militancy’ in Kashmir — both home-grown and imported. Terrain and topography offer good covers — sometimes close to and almost parallel to —the National Highway. The well-populated areas and towns are usually well-connected with a network of roads. 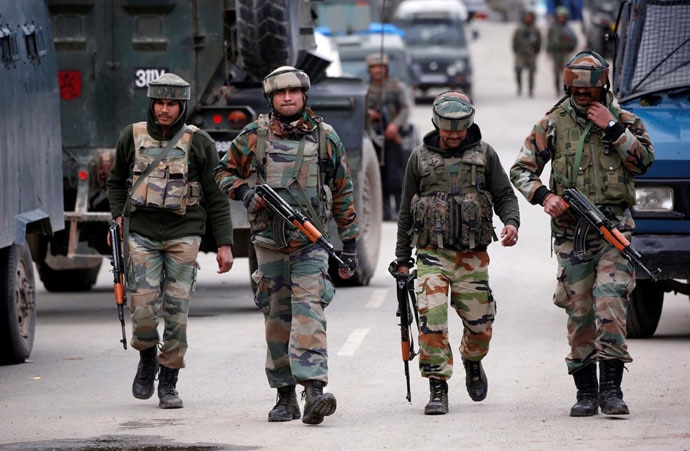 Indian army soldiers patrol a street near a site of a gunbattle between Indian security forces and suspected militants in Khudwani village of South Kashmir's Kulgam district (Credits: Reuters).

Besides this, there is a sympathy factor as well. Militancy cannot survive without local support. While there is little support among the locals, there have been suggestions that the almost six thousand Rohingyas have terror links. The insinuations resurfaced after the Sunjuwan Army camp attack earlier in the year. Some reports by media houses suggested Rohingyas helped terrorist escape from the police. Further reports suggested that terrorists took shelter with Rohingyas before the attack.

Although it has never been conclusively proven — in 2015, a militant killed by security forces in south Kashmir. Abdur Rehman al Arkani — initially identified by the pseudonym “Chota Burmi” — was found to be from Rakhine, Myanmar. The Inter-Services Intelligence (ISI) and LeT are reportedly playing out a victimhood narrative of Rohingyas being wronged by non-Muslims. According to sources, security forces are increasingly noticing the use of the word ‘Burmi’ in conversations between militants.

The fight against militancy is a multi-faceted, continuing and often long drawn out battle. It is up to both — the civil administration and the security establishment — to ensure that fear does not return to the region.

#Rohingya Muslims, #Indian Army, #Jaish-e-mohammed, #Lashkar-e-Taiba
The views and opinions expressed in this article are those of the authors and do not necessarily reflect the official policy or position of DailyO.in or the India Today Group. The writers are solely responsible for any claims arising out of the contents of this article.