Is there a political solution to Kashmir?

For years, itinerant activists and self-appointed advisors have advocated a political solution to the so-called Kashmir problem. Strangely, however, none of these characters have ever spelt out what this amorphous political solution is.

There is a sort of fuzziness in even describing what exactly the political problem to which they are advocating a political solution. But it isn’t only the Kashmir careerists who are fuzzy about Kashmir. New Delhi, or if you will, the Delhi Durbar, is just as confused.

Even though the political and bureaucratic establishment (including the military) never stops talking about a political solution, there is always a tendency to appoint a former bureaucrat, spymaster or general as Delhi’s representative in the state. In other words, the governor has invariably been a non-politician who has been picked up on the basis his savvy of security and administrative matters. 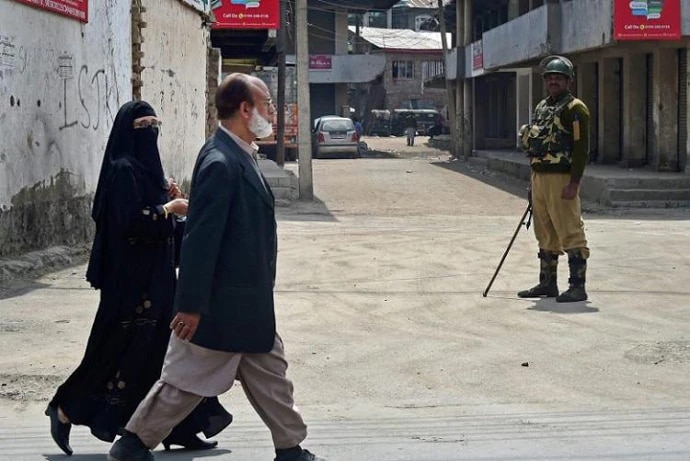 People never stop talking about a political solution to Kashmir. But is there even one? (Photo: PTI)

It is assumed that coupled with their administrative skills, the fact that these people who have successfully climbed the greasy pole during their careers are adept in traversing the treacherous world of politics; they are ideally suited to for the governorship of a sensitive state like Jammu and Kashmir.

To an extent, given the security challenges that the state confronts, there is some merit in this argument. But both by instinct and by training, an official’s mind behaves and reacts differently from that of a politician. In Kashmir, while the security dimension of the problem cannot be ignored, nor can the political dimension. If anything, politics and security have to move in tandem. But often enough, when the situation deteriorates, the security approach tends to be prioritised over the political approach.

For the first time, the Modi government bucked the trend by appointing a quintessential politician, Satyapal Malik, as governor to succeed the former bureaucrat NN Vohra. The appointment of Malik was nothing if not counter-intuitive, especially at a time when a new and more virulent form of militancy and terrorism is unfolding in J&K.

Normally, given the resurgence in terrorism, coupled with the collapse of the political government, the stock response of Delhi would have been to appoint an administrator, a security czar of sorts who would clean up the mess. No surprise then that when Malik was shifted from Patna to Srinagar, it raised many eyebrows, more so since Malik had neither background in security management nor was known to be a Kashmir hand. In retrospect, this appears to be a masterstroke.

The appointment of a political governor sent a strong signal that the government of India prefers a political approach rather than a purely security-oriented approach. What is more, since Malik didn’t come with any baggage of being either a Kashmir hand or a security expert, he was ideally placed to assess the situation with an open mind.

And most importantly, unlike the apologists for the separatists, who are always trying to appease and accommodate them, Malik has thinly disguised contempt for the separatist conglomerate. He has expressed this in his own inimitable style: the Hurriyet cannot even go to the toilet without seeking permission from their Pakistani masters!

Malik appears mindful of the dangerous new turn that terrorism has taken in Kashmir. The syncretic and quite unique Kashmiri Islam is steadily being taken over by an alien Islamist death cult that is inspired by radical movements in the Middle East and AfPak region. He has good and interesting ideas on how to wean away the youth from the nihilistic path and build a counter-narrative that combats the pernicious ideology of the separatists and Islamists. While he has let the security professionals handle the security side of the problem, he has focussed on the political and administrative side. Not only is he trying to address the governance deficit that has fed into to separatist narrative, but he is also kickstarting the political process that had gone into a limbo after the PDP-BJP coalition collapsed.

Unimpressed, undaunted and undeterred by the boycott call was given by "mainstream" political parties like PDP and NC, Malik went ahead and held the long-delayed elections to the Urban Local Bodies. He is now all set to hold the Panchayat elections. And setting the cat among the pigeons, he has now hinted that since the present legislative assembly is dysfunctional, he is considering dissolving it and holding fresh elections.

Politics abhors a vacuum. This immutable lesson of politics was ignored by the ‘mainstream’ parties who, in their own lack of wisdom and because they thought by boycotting the polls they could blackmail the government to cede them more space, shot themselves in the foot. By ignoring them, and going ahead with the elections, Malik has put the fear of marginalisation in them. A new crop of young politicians, smarter, more committed, more sincere than the older lot has grabbed the opportunity and come to the fore. The old business of politicians pandering to separatists will have to end. (Photo: PTI)

By ceding space to this new lot of politicians, the old parties are now in a fix. There are a lot of rumblings among the cadre of these parties resenting the boycott. If they now continue their boycott, they risk irrelevance; if they participate, they will have to climb down their high horse, end the business of hedging their bets by running with the separatists and hunting with the state. In short, they will have to start taking clear, unambiguous positions on many issues.

The old business of pandering to separatists even as they profited from the state will have to end if they have to remain relevant in politics. What is also scaring the hell out of the NC and PDP is the fact that if they boycott the assembly elections, they will pave the way for the BJP and Congress to capture the assembly and pass laws that could integrate the state with rest of the Union.

The Modi government, like all its predecessors, has made its share of mistakes in Kashmir. It has failed to follow up on its crackdown on terror finance and money laundering networks. It has turned a blind eye to unconscionable corruption and maladministration. It has made Faustian bargains to grab power. It is a long list. But the one thing it has got right is putting a wise and cunning political man at the helm who has shaken up things much more than any babu or general could.

Also read: Wrong on Rites: Kashmir often sees reports of Muslims helping with Hindu last rites. There is a need to halt this 'same story trend'

#Terrorism, #Militancy, #Narendra Modi, #Kashmir
The views and opinions expressed in this article are those of the authors and do not necessarily reflect the official policy or position of DailyO.in or the India Today Group. The writers are solely responsible for any claims arising out of the contents of this article.