The Kathua girl died many times - and we are to blame

With every crime committed against children, we are failing them miserably.

Last week, we saw humanity at its worst as the harrowing details of a young girl’s abduction, rape, torture and murder unfolded. It was extremely disturbing and disheartening that adults used this innocent child to avenge and settle scores between themselves. The child, one of the most vulnerable individuals from that community, was mercilessly mistreated and abused. It is even more heartbreaking to know that all of this emerged out of a communal and land dispute.

If that was the first death that the little girl died, there were quite a few more in store for the child which we might have overlooked, or simply ignored.

Children are born free and it is we, the adults, who chain them into multiple parameters of identity set by us – the identity of caste, creed, class, region and religion. The clash between communities, translation of rage and power against that young girl was ghastly and spine-chilling. It is sad if we, as a society, cannot see them as individuals who need to be nurtured and protected all the time, but bring them into worldly wars of caste, class and power. Nothing can be more worrying than this mindless misuse of power.

The deliberate and premeditated plan to abduct the child and abuse her to death shows that the perpetrators chose this girl as the soft target and wanted to hit the community where it would hurt them the most. That we have failed to recognise her as an individual, entitled with rights to live and grow with dignity, is indeed the second death that we have deliberately pushed her to. 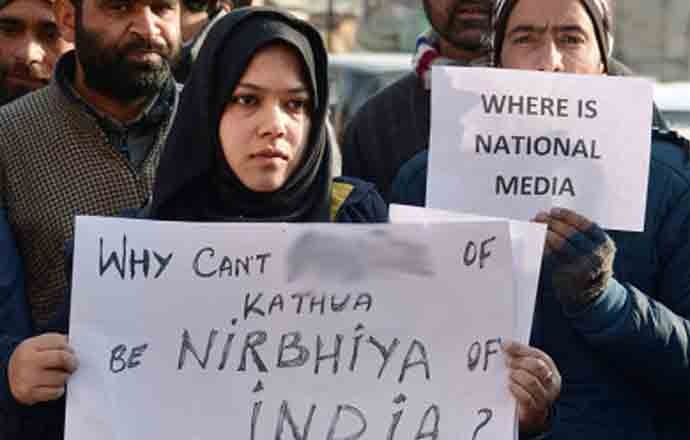 The involvement of police in committing this crime as well as their role in attempting to tamper with evidence is another example of the abuse of power. It is surely a matter of huge concern as those who were meant to protect the innocent child turned into the perpetrators. We also sense that the investigation was not thorough enough, and politicisation of this crime defeated the basic idea of justice for children. The way the death of this young girl has been pushed to the wings and political overtones have taken centre stage is perhaps an even bigger death the child has had to die.

And yes, amid nationwide outrage over the gang rape and murder of the eight-year-old in Kathua, similar incidents are reported from other parts of the country; as a 6-year-old rape survivor in Rohtas district of Bihar is still struggling for dear life, and an 11-year-old girl has been raped, tortured and strangled to death at Surat. This however does not come as a surprise, as these grim and macabre incidents remind us that crimes against children has seen a steady upward trend with a significant increase of more than 500% over a period of the past one decade, and one-third of all crimes against children are sexual offences, as the recent NCRB data revealed. This, of course, brings us to the popular narrative demanding to extend capital punishment to perpetrators for the atrocities of this nature against children. At the outset, we recognise that there is an urgent need to stem the tide of growing violence against children. While the judicial process would take its own course and we are hopeful that the girl and her family would be served the justice they rightly deserve, it is important to note that death penalty might not be the answer in all the cases. A knee-jerk reaction is surely not the solution, as it might look at addressing the problem at a superficial level and a regressive step in the field of sentencing and reformation. It might further reduce reporting and can be detrimental in strengthening the prevention aspect of child protection.

This is a known fact that, in most of the cases of sexual offences, perpetrators are known to the victims, and therefore, because of the familiarity of the child with the offender, the proximity and the child’s vulnerability, capital punishment may serve to deter reporting of cases. It may even lead to destruction of evidence by murdering the victim. To punish offenders of sexual crimes against children, the first step instead is to strengthen the system – improving the investigation process, taking the child’s testimony seriously, being sensitive and supportive to the victim, reducing the number of pendency and increasing conviction rates.

Finally, as a nation, we owe our children a safe childhood and nothing short of that. Neither can we afford to play a blame game, nor can we let the focus shift from the fact that with every crime committed against children, we are failing them miserably. It is time to put child protection at the centre stage and adequately invest for preventing crime against children. It is time we started focusing on what is of utmost importance – a safe childhood for our children, not only in rhetoric but also in action.

In fact, it is way past time. Let’s admit that and take the responsibility, before another child dies a similar death.