Karni Sena agitations over Padmaavat: Why I blame Bal Thackeray

The present controversy that surrounds the release of Padmaavat should lead us to ask what gave a small mob the sense of power that it could actually challenge the rule of law. We just need to look at recent history to find all the answers.

I feel things would not have come to a head had the political class as well as the film fraternity shown some spine to stand against the illegitimate demands of Bal Thackeray and his Shiv Sena. From the 1970s to the late 1990s, filmmakers crawled when Thackrey asked them to bend. 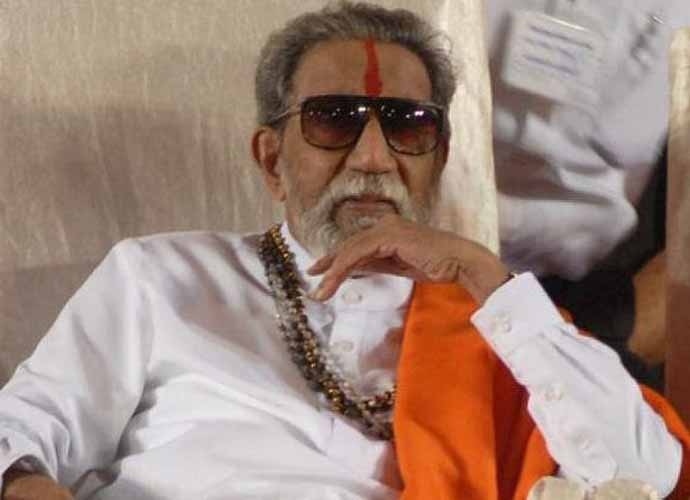 It was in the late 1960s that Shiv Sena founder Bal Thackeray, who had started his career as a cartoonist, started campaigning against the "yandugundus", a term used to referred to people from south India. This anti-south Indian movement received a fillip in 1968 when theatres in Chennai (then Madras) decided not to screen Hindi movies. Mumbai (then Bombay) had established film production houses. His political ambitions were quite clear as his organisation actively campaigned against leftist politicians during the 1967 general election. Thackeray played a key role in Congress' poll management against the left.

He was a man of limitless ambition. With an eye on the 1968 municipal corporation elections, Bal Thackeray started unionising people working for Bombay cinema into an organisation called Shiv Sena Chitrapat Shakha.

On February 26, 1968, he issued an ultimatum that no theatre in Maharashtra would screen Hindi films produced in Chennai (then Madras). The move helped him garner the support of Bombay cinema as Thackeray's ultimatum was seen as a fitting reply to the boycott of Bombay films by theatres in Madras. It should be kept in mind that unlike current times, a number of Hindi movies were also produced in Chennai. This call was aimed at two big productions - Aadmi and Do Kaliyaan.

This arm-twisting worked and Shiv Sena mobs allowed Do Kaliyaan to be screened only after its producer AV Meiyappan met Thackeray personally to allow the screening. The movie was cleared with the understanding that Hindi movies would be allowed to be screened at Madras theatres. This was an unprecedented moment in the history of Indian cinema. Filmmakers had to take permissions to release their movies even after obtaining a Censor Board certificate. The rule of mobs and lawlessness had knocked at the door of Indian cinema.

Rather than stand with the rule of law, Bombay cinema sided with Thackeray. Welcoming the illegal ban imposed by Sena on Hindi movies produced in Madras, Bombay cinema felicitated Thackeray at Ranjit Studio in the presence of many distinguished filmmakers.

Thackeray had tasted blood. The powerful Hindi cinema was now under his control. In 1973, Shiv Sena mobs attacked theatres again. This time to force producers of Prabhat to first screen the movie for Bal Thackeray and Manohar Joshi. Shiv Sena alleged that the movie celebrated prostitution and hence could pollute Indian culture. Parallel censorship was now a reality. Now filmmakers had to obtain two certificates, one from the CBFC and another from Thackeray. Meanwhile, Thackeray's ambitions kept growing. With the VHP-led Ram Janmabhoomi movement gaining traction, he took upon the role of an extremist Hindutva leader.

On August 26, 1988, he asked the film fraternity to stop giving roles to Muslim actors. Thankfully, at least this time filmmakers resisted. Otherwise Shah Rukh Khan, Aamir Khan, Salman Khan and others would have never entered the industry.

In November 1991, as Henna starring Pakistani actress Zeba Bakhtiar was in theatres and films starring other Pakistanis such as Somy Ali, Mohsin Khan were on the floor, Thackeray called for the complete boycott of the Pakistanis from Indian movies.

Several producers were likely to get hit as dozens of movies were at production stage. The industry still did not show spine. Instead of standing up against the decision, producers went to a man with no constitutional authority with folded hands to beg for permission to cast the Pakistani artistes.

Producer Sawan Kumar Tak was denied "permission" to cast Zeba Bakhtiar. Ironically, Mahesh Bhatt who has come out openly in favour of Sanjay Leela Bhansali and said that filmmakers should not bow down to mobs and threats himself submitted to the whims of Shiv Sainiks. In a statement, published by the Times of India, he said, "What Mr Thackeray is saying seems fair - why should we allow Pakistanis to use India as a commercial proposition… After all, India is not a transit lounge where every Tom, Dick and Harry can stop to make quick bucks."

Ironically, his own movie Saathi starring Mohsin Khan was awaiting Thackeray's permission for release back then.

Thackeray was playing the communal card and he needed to target more Muslims. In March 1993, he asked his followers to boycott Shabana Azmi, Dilip Kumar and AK Hangal for attending the Pakistan Day celebrations in Mumbai. The diktat came even though Azmi and Kumar had not attended the event and, as Hangal pointed out, BJP president Murli Manohar Joshi himself graced the event at Delhi consulate. Shiv Sena mob raided the Minerva theatre in Mumbai where Sholay was being screened. Distributors relented to the demand in no time and deleted Hangal's scenes from the movie.

After the serial blasts in Mumbai, Thackeray again launched an attack on film stars. He called for complete boycott of artists who had performed in Dubai. While there was no such law of the land Thackeray ran a parallel rule. Mithun Chakraborty, Govinda and Anil Kapoor had to personally meet him to persuade him to allow their movies to run in theatres.

The Times of India reported that the Film Makers' Combine (FMC) agreed not to cast any "tainted" artist as well as those who pose for semi-nude photo shoots. FMC declared, "It will protect and preserve the Hindu way of life, culture and values." The declaration showed a complete hijack of the popular culture by communal political forces.

In 1995, film-maker Mani Ratnam made Bombay. The movie depicted the communal riots that broke out in Mumbai just after the Babri Masjid demolition. Tinu Anand played the role of a politician, which was the purported portrayal of Thackeray himself. CBFC cleared the movie for release without any cuts but Shiv Sena opposed it. Once again Bal Thackeray played as parallel censor. Ratnam showed him the movie at his residence and made the changes recommended.

Control on cinema was vital to Thackeray's politics. His initial campaigns against the Madras cinema earned him the support of the industry in Bombay. He won many admirers and loyal supporters among them as they started looking at him as their saviour. Through supporting the cause of Marathi cinema, even though through illegal means, he gained the godfather image among Marathi filmmakers.

As he tightened his grip on cinema, many films were produced to promote his political agenda. During the 1980s many films showed characters portraying the ideal Shiv Sainik or the ideal Hindu - a no nonsense man from a modest background who takes law into his own hands to save his people.

These violent characters carried a Robinhood image against the system which was oppressive and, at times, against the culture. Jaisi Karni Waisi Bharni and other Govinda-starrer movies are perfect examples of how movies were used as propaganda machinery against the invasion of western values in Indian homes. Films like Tezaab and Parinda legitimise violence to save women and community. This was the perfect message Shiv Sena and other Hindu right wing organisations wanted to spread at the height of the Ram Janmabhoomi movement. It helped in creating a sense of pride among the mob for carrying out violence against the enemy (who were mostly Muslims).

It also helped in manipulating Thackeray's own image. Wherever a character resembled him, he made it a point that his on-screen crimes were celebrated in a godfather-like manner. Bombay is a case in point where he interfered and forced Ratnam to show him in a manner which he could boast about.

The film industry's readiness to place its self-interest over the commitment to freedom of speech and expression has brought it here. Karni Sena has done nothing new. It is just taking forward the legacy of Shiv Sena and in the name of culture, values, religion etc, destroying the art.