Why Jinnah must be blamed for Partition

Churchill felt that Nehru and Gandhi were too rigid and more socialist in their approach.

We are a democracy, and everyone has the right to express their opinion. That’s great. But should we express an opinion when the facts we rely on are wrong? Aakar Patel has written a piece that presents a point of view on Jinnah; perhaps fuelled from the recent spate of Jinnah adulation and Jinnah bashing.

Jinnah had but one aim; he wanted to be the creator of a nation. He wanted to be “loved” for what he did and wanted to be remembered for the “good” he did. Sounds a lot like a fascist, dictator and not a person working for a cause. Here is the historical evidence that proves this (not suggests, as others might want us to believe). No, Jinnah wasn’t an innocent believer

India’s Partition happened in August 1947. The so-called Mountbatten Plan dividing India was coined and anointed in 1947. The Radcliffe line was legitimised in 1947. But the Partition of India was drawn up two years earlier and that is a fact that is grossly overlooked. There is now documentary evidence that clearly states that Churchill devised the plan and Jinnah was an active participant. Hence, The Mountbatten Plan should rightly be called the Jinnah-Churchill plan.

Similarly, Churchill had the Partition of India worked out long before McMahon was given the task. The Radcliffe line should rightfully be called the Churchill line. Sir Cyril Radcliffe refused to take money for the job of partitioning India; he stated that he didn’t do any work and hence wasn’t entitled to any compensation.

In the Churchill Papers, now in the public domain, it is clear that it was Churchill that used Jinnah as a willing pawn to further what he thought was a clear British advantage in a divided India.

Churchill felt that Nehru and Gandhi were too rigid and more socialist in their approach. Jinnah offered the perfect counter and the Hindu-Muslim sensitivities were the perfect fire to fan. Jinnah knew well ahead of Mountbatten’s arrival that the Partition would happen. He had already negotiated and sealed this decision with Churchill. There is sufficient evidence now to arrive at this conclusion. But for the world, like an excellent actor, he kept up the charade of “negotiating a Pakistan”. There is evidence of his “engineering”. 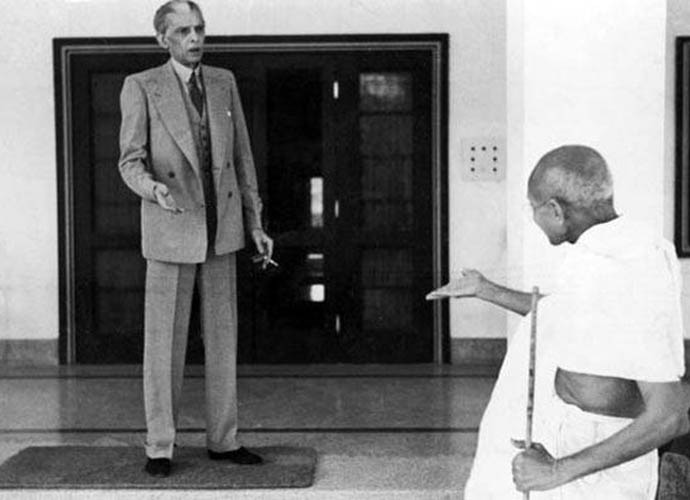 For how long will misrepresented facts in cleverly crafted words be tolerated?

The Calcutta riots of 1946 weren’t an outburst of simmering discontent that spontaneously erupted. It was an orchestrated move that Jinnah predicted in his letter dated 7th July, 1946, written to a deposed but very much “with it” Churchill. Why do we choose to ignore this fact?

Jinnah was dealt a brilliant hand when Churchill was ousted from office. Atlee was too busy trying to “fix” the problem left by a debt-ridden economy post the World War II. By the time Churchill returned to the PM office, Jinnah was dead. India was trying to remain united with Kashmir and many other states snapping at the concept of a “One India”. It was the perfect crime!

And as Aakar Patel’s “blog” reminds us, we remain the perfect idiots!

No, Jinnah wasn’t an innocent believer who wanted nothing but the best interest of the Muslims in an era when they were apparently threatened. That is perhaps the narrowest, pseudo-secular view that every wannabe secularist/modernist/tolerant/liberal (you get the gist) wants to project.

Aakar’s blog doesn’t stop at Jinnah, it also belittles one of the greatest visionaries India was blessed with – Babasaheb Bhimrao Ambedkar. Patel’s piece suggests that a Mohandas Karamchand Gandhi blackmailed Ambedkar. In part this is true. The Poona Pact of 1932, in many ways, reflected the “blackmail theory”.

Ambedkar gave into a fasting Gandhi but that was in 1932!! After August 1947, when he was made the chairman of the drafting committee of the constituent Assembly, he had the opportunity to revisit the stance on dalit rights. And he did what he always wanted to do.

Untouchability, the basic point of discord in 1932, was abolished and reservation for dalits was introduced. But of course, Patel’s blog doesn’t mention this; it has to be sensational or else who would read it! A visionary Ambedkar asked for 10 years of reservation and was clear that it was important to bring everyone under one common rule. What political parties made of this issue is another story altogether.

Aakar’s blog also calls Mr Owaisi a moderate voice of India. That’s a new definition of “moderate” that Patel’s blog proposes and is obviously up for another discussion.

The point of my piece is simple – for how long will misrepresented facts in cleverly crafted words that push the limit of truthful journalism be tolerated… for how long?