Why Pranab Mukherjee needs to be hailed for attending RSS event

Now that former President Pranab Mukherjee has been to the RSS headquarters in Nagpur and said what he wanted to, the hysterical hullaballoo created by some Congress leaders, on the eve of his visit, can most charitably be described as a storm in a teacup.

Former Union ministers P Chidambaram, Anand Sharma, Manish Tewari and Jairam Ramesh had publicly criticised his decision to go to Nagpur. Ironically, just a few minutes after Mukherjee ended his speech, the official spokesperson of the Congress was seen complimenting him on a TV channel “for showing mirror” to the RSS. Apparently, effusive praise in place of initial belligerence reflected his “master’s voice”.

Some time back, when the BJP fielded minister Jayant Sinha to rebuff his own father, former finance minister Yashwant Sinha, the Congress had raised eyebrows. However, this time around, the Congress didn’t mind fielding Mukherjee’s own daughter Sharmistha, spokesperson of the Delhi Congress Committee, to question the wisdom of her illustrious father publicly and caution that his visit would be exploited by the RSS and the BJP as the "legitimisation" of their ideology and thoughts.

Mukherjee’s speech has set all the controversies and apprehensions at rest. Citizen Mukherjee emerges as an eminent elder statesman who has the courage of conviction, integrity, erudition and a civilisational understanding of India and its core values and an overarching national perspective to put forward his thoughtful views candidly. Interestingly, his speech is a win-win scenario for all – the RSS, the BJP and the Congress can each cherry-pick what they like.

Silencing his critics, Mukherjee today stands as the foremost political leader in the country who can rise above party politics and flag issues of national significance without fear or favour. With the intellectual depth and lofty ideals of his speech, he has, in one stroke, deflated and dwarfed contemporary politicians fighting their petty turf battles using every trick in the game.

Though he was addressing the "swayamsevaks" of the RSS, his discourse was aimed at every Indian. He emphasised, “secularism and inclusion are a matter of faith for us. It is our composite culture which makes us into one nation. India’s nationhood is not one language, one religion, one enemy. It is the 'perennial universalism’ of 1.3 billion people who use more than 122 languages and 1,600 dialects in their everyday lives, practise seven major religions, belong to three major ethnic groups — and yet live under one system, one flag and one identity of being Indian.”

He continued, “We derive our strength from tolerance. We accept and respect our pluralism. We celebrate diversity.” Which other political leader could have gone to the RSS headquarters and highlighted these core Indian values? 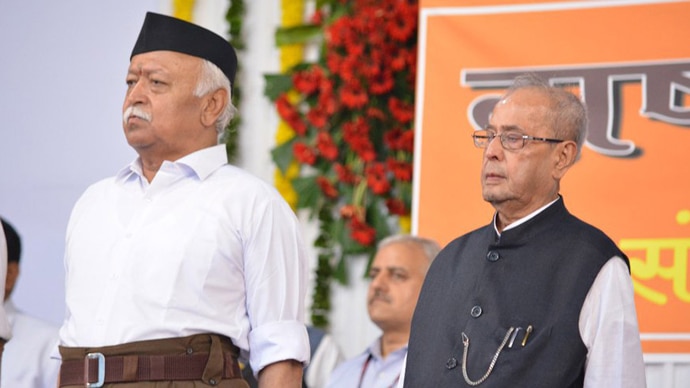 It’s fashionable for the RSS ideologues and the top BJP leadership to castigate first Prime Minister Jawaharlal Nehru at every given opportunity. But Mukherjee not only complimented him along with Mahatma Gandhi and Sardar Vallabhbhai Patel, he also showed courage to quote from Nehru’s book, The Discovery of India.

For Mukherjee, “The Constitution of India represents the hopes and aspirations of a billion plus Indians. From the Constitution flows our nationalism. The construct of Indian nationalism is constitutional patriotism.” He reminded the government of its raj dharma drawing attention to Kautilya’s shloka inscribed in Parliament: “In the happiness of the people lies the happiness of the king; their welfare is his welfare. The state is for the people.”

Veteran BJP leader LK Advani praised both Mukherjee and RSS chief Mohan Bhagwat for setting up a true example of dialogue transcending ideological affiliations and differences and saw significant concord and resonance in their views. Evidently, there is a huge gulf in what the leaders of the political parties say in public and what they actually do.

In his speech in Wembley Stadium in London (May 2015), PM Narendra Modi extolled India’s long tradition of religious tolerance, pluralism and inclusiveness. But back home, he couldn’t control cow vigilantes and rabble-rousing MPs of the BJP who would ask the beefeaters to go to Pakistan and threaten those who will refuse to say "Bharat Mata Ki Jai". To his credit Mukherjee didn’t salute the RSS flag and ended his speech with 'Jai Hind’.

Sadly, no political party in India has the moral credentials to lecture the other on tolerance, dialogue, inclusiveness and raj dharma. If the BJP is accused of the 2002 Gujarat riots and the 1992 Babri Masjid demolition, the Congress too finds itself defenceless on the 1984 anti-Sikh pogroms and the 1975-77 Emergency.

When our political leaders can’t show respect to each other and have a civilised discussion on national issues inside Parliament, to expect them to accept contrarian views and have a dialogues seems near-impossible. What Citizen Mukherjee talked about in Nagpur was an ideal world of Indian polity. Hopefully, some day, the idealism will meet the stark reality.

Also read: A bold new stand: Why Rahul Gandhi is ready to take on the RSS