He reflected the ordinary citizen’s perception.

Rajinikanth’s recent visit to Thoothukudi to meet the families of those killed and maimed in the police firing against the widely-reported Sterlite protests has turned “controversial”.

He was blunt, his typical self. It was as if the screen persona and his biting dialogue had seamlessly blended into his public persona. Thalaivar’s Thondargal — the leader’s loyalists — feel let down that he was “politically incorrect”; he said: “Do not forget that it was the infiltration of antisocial elements and their violent conduct that provoked the police firing. It is not proper to protest for anything and everything, as otherwise Tamil Nadu will become a graveyard.”

The legion of his fans, the “agitators” and the affected citizens could not believe what they had heard from “Kabali”. He had come to share their grief and offer solatium to victims’ families, and in “their” view, his words hurt them. So much so that a victim supposedly asked: “Who are you? Where have you come from?”

The actor-politician politely replied: “I am Rajinikanth. I am from Chennai” and beat a hasty retreat, aware of the intensely emotional environment.

“Naan Oru Thadavai Sonna, Athu Nooru Thadavai Sonna Mathiri (if I say it once, it is as good as me saying it 100 times).” That was superstar Rajinikanth’s famous punch dialogue in the blockbuster Basha. It was invoked a hundred times in 1996, when Jayalalithaa was standing for re-election, after a five-year dismal reign, which culminated with the very public grotesquely extravagant wedding of her “adopted son”.

At the time, Rajini had added for effect: “If she is re-elected even God cannot save Tamil Nadu.”

He was widely expected to join politics and considering the perception and revulsion to “Kazhagam politics” then, it may well have been a tidal wave win for him, even without a formal party organisation. The atmosphere was so electric and palpable, yet he chose not to bite the bullet.

The benefit of Rajini’s rhetoric, so magical and popular, was reaped by DMK and Tamil Manila Congress floated by late GK Moopanar. The Iron Lady’s front was routed, with her losing her own seat. Rajini had made a huge impact — and Tamil Nadu and the rest of India kept looking for his royal entry.

He is a simple man. He does not “make himself up” in public.

Contemporaries like Amitabh Bachchan have always wondered how he can maintain his “hero image on screen” despite his casual and careless appearance — with unkempt hair and a not-so-stylish beard; how he can be so simple, yet phenomenal.

“Rajinikanth is phenomenal. The largest, the best and truly the boss of Indian cinema. We are friends and colleagues… look where he came from and what he has become. Sheer hardwork, talent and the belief that he could do it. And he did. He is a fantastic living example for the youth. Despite his extraordinary career, he has remained a simple, down-to-earth person.”

But that is what endeared Thalaivar to his admirers. It was strongly felt that amid the plastic political culture of making “politically correct” pronouncements on such occasions, yet assuming a hypocritical conduct, this man would be different.

He may “speak” his mind and not “mince” words. 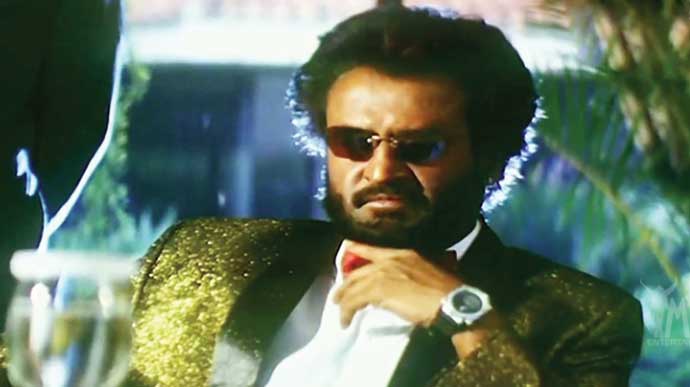 Thalaivar, we say a hundred times, be yourself. Photo: Screengrab

Politics to him was a “spiritual pursuit”, he said. He was not entering the arena to make moolah, of which he had plenty, or to win in popularity stakes, which, too, he revelled in. Rajini was here to use the love and passion of his dear Tamilians ,who gave him their all, to return their love by coming to power, if possible.

He promised that he would “quit” if he felt he could not “deliver”. That was his commitment. It came in for high praise and was seen to be “different” from the run-of-the-mill political class we were so far exposed to.

Yet, when he has “spoken” his mind today, there is protest for that too. The problem lies with us, the people of Tamil Nadu. We knew Rajini as he was. That is why his announcement to join politics was welcomed. He offered honesty in view, words and deeds with probity.

Strangely, today, when he expressed his frank view, it is being viewed as harsh, uncaring et al.

Sorry, Thalaivar cannot be faulted for his statement. Trained in an environment where the political class would always fault the police and support the agitationists — to be seen as anti-establishment and “liberal”— he was honest to God when he said that the 100-day old peaceful agitation may have been infiltrated by antisocial elements, and that this may have led to violence.

Well, it was his opinion and the judicial commission may vindicate or reject it — we ought to wait before we can pounce on him.

As for his critique of the continuing mood of agitation, in Tamil Nadu for any and every cause since January 2017, he reflected the ordinary citizen’s perception.

Seeking to resolve conflict on the street does not reflect well on the ethos and culture of the state.

It has a past with a rich and responsive legal mechanism. Why then agitate all the time for everything?

Rajini was expected to be honest and brutally so, for he was in politics for “public good”, not private interest. Instead of welcoming a departure from the provocative public postures of political correctness from those who did not believe and act on their pronouncements, Thalaivar has received brickbats and been lambasted.

Not so fair, it would appear.

Hope Rajini does not transform. Tamil Nadu surely did not welcome him to see him in the company of the “politically correct”, whose propriety in politics has served them and their progeny and not we the people.

Thalaivar, we say a hundred times, be yourself. Don’t change.

#Jayalalithaa, #Tamil Nadu, #Sterlite, #Sterlite protests
The views and opinions expressed in this article are those of the authors and do not necessarily reflect the official policy or position of DailyO.in or the India Today Group. The writers are solely responsible for any claims arising out of the contents of this article.