If only political will had been united, unafraid of election results, the situation wouldn't have escalated.

Wednesday was expected to be a slow news day. The headlines either spoke about ceasefire violation across the border or a group of angry women in Rajasthan vociferously protesting the release of the movie Padmaavat.

In the midst of the frenzy, I reached PVR cinemas at Gurgaon’s Ambience mall, where the film's paid preview was scheduled, for a quick report. Little did I know that by evening, violent protests would break out only a few kilometres away, with goons torching and vandalising buses, literally uniting a country against a casteist fringe. By evening, Haryana did not have to look far for more intimidation.

At 10am on Wednesday, police personnel began a security check at the mall. At least 30 of them were deployed at the theatre to ensure law and order. The mall’s management, too, had beefed up security and deployed an additional 40 guards and bouncers. Policemen in civies patrolled its premises.

Once the visuals had been recorded and sent by my team, and the story typed and published, I decided to sit down for coffee. At around 3.30pm, my phone rang and I was informed that a protest had broken out on the highway, and that I had to cover it since I was closest to the location.

Our team rushed to the highway, and we ensured the OB van kept distance, considering vans are a natural target of mobs. Routine traffic could be seen on the streets, though the heightened presence of security personnel indicated that the area was under surveillance.

A policeman directed us to the road where a bus had just been attacked. Almost 18 kilometres away, a torched Haryana Roadways vehicle bore evidence of what had struck the busy highway only a short while ago. I found the conductor and driver standing near the bus and initiated a conversation.

"Approximately 50 young men charged at us from nowhere and were armed with iron rods, knives shouting 'Roadways ki bus aa gayi, maro!'. They pelted stones at the bus and asked us to get down. We could barely run. Once we rushed out, they burnt the bus down. We don't know why they did it, they did not mention anything about the film or any other issue," the driver said.

The cameraperson immediately began recording visuals of the bus, its inside charred — smoke still emerging from the seats and sparks from under the bus.

I was struck by the site — bang in the middle of a highway, surrounded by scattered villages and few rickety-roofed shops. Where did this mob come from, or better still, where was it hiding before charging at the passengers? 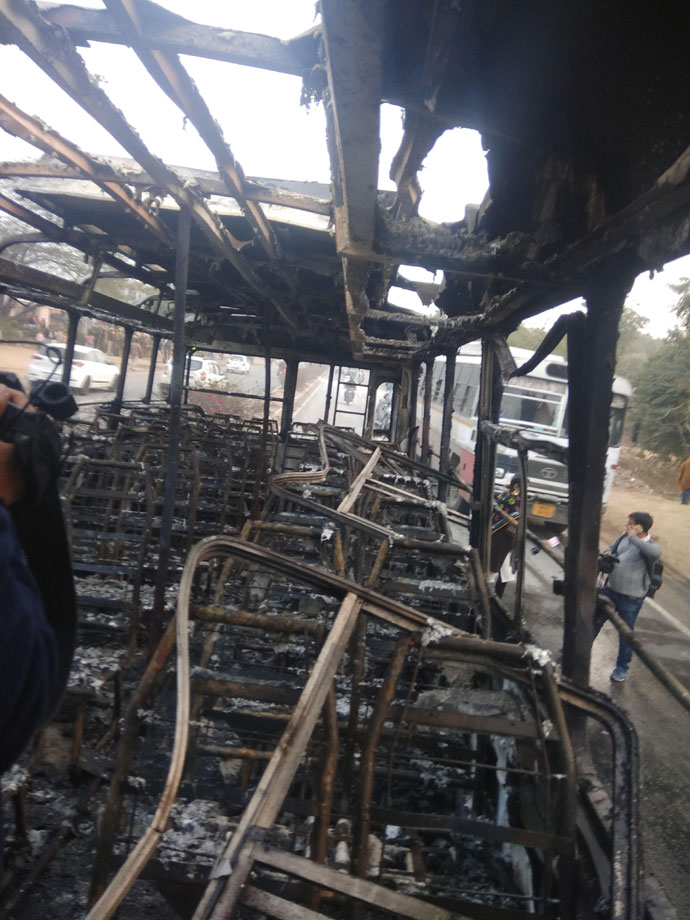 Where did this mob come from, or better still, where was it hiding before charging at the passengers? Photo: Pooja Shali/ India Today

There was no clarity yet on another bus that was attacked — it had been carrying students of GD Goenka World School. As luck would have it, I saw the vehicle return, having dropped the children safely. We hurriedly took some visuals of broken window panes and spoke to the driver (off the camera). By then, a mobile video of terrified children crying inside the bus, being comforted by their teachers, had surfaced.

The headlines suddenly shifted to this location and rightly so. Outrage on social media, scathing reactions from the political Opposition and the now viral video of the children played on loop on TV screens.

News anchors wanted to know where Haryana chief minister ML Khattar was. Where was the outfit whose ideology was cowardly enough to threaten children?

There was no clarity if these goons were part of the Karni Sena. Frankly, it did not matter. These young masked men had taken advantage of a volatile situation and added fuel to fire.

I recorded as many eyewitness accounts as possible, experience told me each account could become a crucial testimony to the unprecedented violence.

At 8pm, I realised I had skipped lunch, the coffee mug had been left half-empty. It had turned dark, I was still on the Sohna Road highway outside the GD Goenka World School, trying to speak to some staff members. One teacher explained to me on a live bulletin how the staff was handling the situation, she confirmed that the children were safe.

Finally, a day that had started at 6am ended at 10pm. Hungry and exhausted I reached home, only to prepare for the next day. Early next morning, I headed to the school premises — to interact with the driver and conductor who had been witness to the attack.

"It happened within seconds. I saw a Haryana Roadways bus being attacked and their passengers fleeing. I decided to keep driving because there were children sitting inside. They were like my own children. They started to cry and were terrified," said Pravesh Kumar, the driver.The school management is planning to reward the two men, to acknowledge their presence of mind. Gurgaon has nearly returned to normalcy.

The children have been reassured they are safe. Theatres running the film have chosen to barricade their premises, and the police had to impose section 144 to guard against assembling mobs or fresh violence. Who would want to watch a film in fear, unless to make a point to the fringe outfits?

If only political will had been united, unafraid of election results, the situation wouldn't have escalated.

The silver lining to Wednesday’s incident was that it united the country against what an incensed fringe is capable of if its rampage is not stopped at the outset. This was closer home, and it could have been anybody's children on the bus.

May our young ones be kept away from the violence encouraged by political apathy.

Post your comment
#Rajasthan, #Padmaavat, #Gurgaon
The views and opinions expressed in this article are those of the authors and do not necessarily reflect the official policy or position of DailyO.in or the India Today Group. The writers are solely responsible for any claims arising out of the contents of this article.