Why is RSS scared of making its stand clear on Sabarimala issue?

At a time when the Supreme Court is set to deliver its verdict on pleas challenging the ban on the entry of women in the age group of 10-50 years into the Sabarimala temple in Kerala, the Rashtriya Swayamsevak Sangh (RSS) has surprisingly kept itself aloof from the controversy.

Is it because the RSS doesn't have an opinion on the subject, or the fact that it doesn't want to make its views on the subject public?

Recently, I got an opportunity to meet Geeta Gunde, the head of Bharatiya Stree Shakti (BSS), a women's organisation affiliated with the Sangh Parivar. She is also the national convener of the RSS’ women-related projects. The BSS, it says, works for empowering women in the field of education and economy. It claims to have conducted surveys on the practice of female foeticide in Haryana and Jharkhand and conducted an awareness campaign.

When asked about the RSS’ opinion on the Sabarimala issue, Gunde’s response came as a surprise. She was far from being diplomatic, unlike other RSS leaders, and said: “We are not in favour of restricting women’s movements at any place. Women should be free to go anywhere they want. A decision whether or not to visit a temple should be left to them only." Women pilgrims above the age of 50 at Sabarimala. (Image credit: The Week/Nikhilraj)

The next surprise came when she revealed that the RSS does not consider homosexuality as a crime.

Geetatai, as the octogenarian is fondly called, said some people in society may have different sexual orientations. "They could be counselled, but that does not mean they are criminal and should be punished for that. Hindu culture has a place for everyone. It does not discriminate among its followers,” she added. She also made it clear these are not just her personal thoughts, but also that of the RSS, which has taken a "similar stand on the widely debated issues".

Gunde is one of the few women members to be invited to the RSS’ annual meeting, Pratinidhi Sabha, where the organisation finalises its agenda for the next year. So, her words carry considerable weight.

Of course, she is not the first one from the Sangh Parivar to say that homosexuality is not a crime. RSS sah-sarkaryavah (joint- general secretary) Dattatrey Hosabale too had taken a similar stand at the India Today Conclave in 2016. 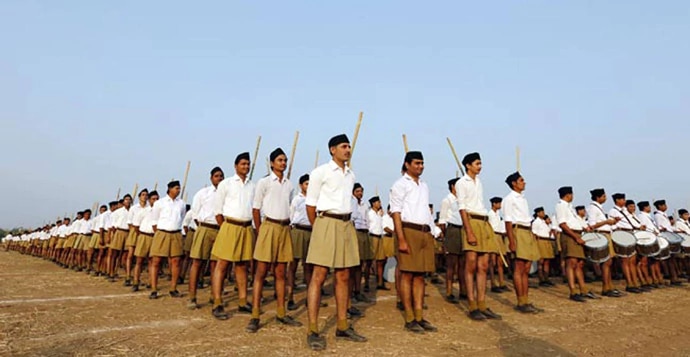 Why does the RSS not endorse its 'progressive' stand in public? (Photo: DailyO file)

It also becomes important to note the RSS' stand on Manusmriti. The Sangh Parivar has been often accused of promoting Manusmriti, the Hindu scripture which is allegedly anti-women and full of caste biases.

I came to know that recently, the RSS chief Mohan Bhagwat apparently told a few senior organisation leaders that the Sangh does not consider the Manusmriti as a guide to ideal life. He reportedly insisted that the Manusmriti was nothing but "moral codes of conduct in ancient time", and it is no longer relevant in modern times. “We should go by what the saints have said. Whenever there is a conflict between Manusmriti and the saints’ preaching, we will place the saints’ preaching above any other thought,” he reportedly told the leaders.

When someone pointed out that the younger generation is not interested in visiting temples, Bhagwat apparently asked that person to introspect rather than blaming young people. He asked him to focus on the cleaning of temples and stop their commercialisation if he and others like him actually want the younger generation to visit these.

Those who know the RSS and its functioning closely will admit that Bhagwat’s stand on Manusmriti and temples is not less than a revolution. But the question here is – why does the RSS not endorse its "progressive thoughts" in public?

Is it scared that such "boldness" goes against its image, or that society will not accept it in its new avatar?

Also read: ‘The RSS believes in making the Hindu society aware of its civic duty – with compulsory military training’