Three years after BJP govt, hate-spewing trolls have come to a head

Last week, during the run-up to the Gujarat elections, a Mumbai journalist shared a newspaper tribute she'd written to the late Shashi Kapoor, in which she made a passing reference to an incident that illustrated his courage and forthrightness. The post was very well received, but the response she got from one man left her stunned.

The incident that Radha Rajadhyaksha wrote about pertained to something that happened during the post-Babri demolition Mumbai riots of 1993. During this dark phase, when goons were going from door to door looking for Muslim nameplates, the family of her colleague Sameera Khan left the building. While they were away, the members of the society proposed that, henceforth, no apartments should be sold or rented to Muslims. Actor Shashi Kapoor was the only person who protested this decision and stormed out of the meeting. Khan wrote about the incident on Facebook when Kapoor was honoured with the Dadasaheb Phalke award in 2015 and after he passed away; it was also documented in Aseem Chhabra's biography of Kapoor.

After Rajadhyaksha shared the column, a BJP supporter called Veeresh Malik, notorious for his intemperate outbursts on Facebook, in turn shared the column with a vicious personal attack on Rajadhyaksha, casting aspersions on her professional credibility of decades, where he accused her of "spreading fake news" because according to him, the incident never happened. When Rajadhyaksha pointed out the places that it had been documented, and celebrated LGBTQ activist Ashok Row Kavi supported her, saying he had also heard of it independently, Malik became even more aggressive, tagging friends, of a clearly saffron persuasion, and urging them to share his post. Several jumped in with crude comments and shares. 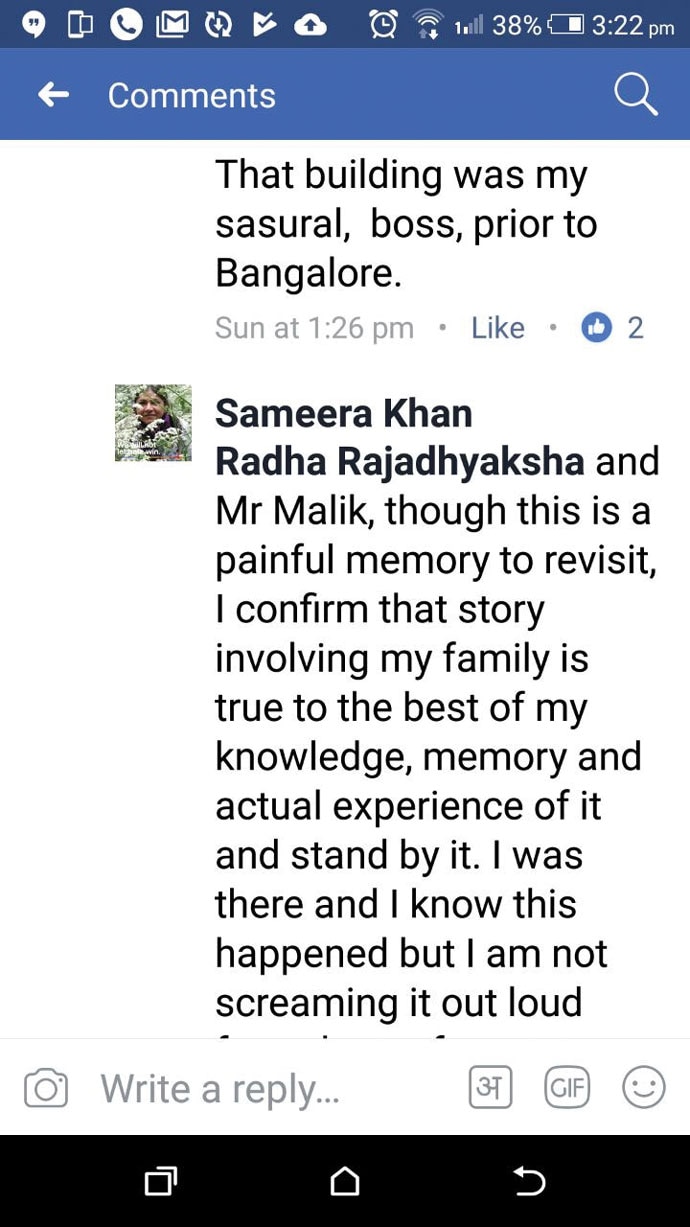 Rajadhyaksha describes the tirade of venom that followed as “unbelievable” in its crude viciousness. "After two days, even Sameera commented on his timeline, saying that although that time was a painful one for her, she stood by the incident and that her faith in humanity during those dark days had been restored only by Shashi Kapoor and a few others," she says.

"That didn't stop Veeresh Malik, who replied that it was strange that no one else from the building had ever mentioned this and neither had Shashi Kapoor or his family. He claimed he knew many people living in the building. Initially that is; later, he began to claim he used to live there himself!"

After Khan corroborated the statement, Rajadhyaksha confronted Malik. "If you had any decency — which obviously you don't — you'd have taken back your words about me making up the incident and being "caught lying", she wrote on his timeline.

"And if you continue to attack me, I'll take action against you." Malik continued with his bluster, telling her to do what she wanted, but then blocked her.

It is one thing to dispute someone’s comments. It is another to carry one’s objections to obsessive levels, summoning a crowd, and claiming a person has been “caught lying”. The latter indicates personal investment and agenda that goes far beyond casual commenting on a thread.

One of Veeresh Malik’s comments was, “Go look at the name plates in the building today and see how many Muslims there are.” The fact that a building society held a meeting to stop Muslims from living in their building 25 years ago during the thick of the riots at a time when a lot of Bombay buildings and societies were doing this out of panic has no link with whether there are Muslims there today or not. In fact, there could have been Muslim families there even six months after the riots.

What was Malik trying to say? That the riots didn't happen; that Muslim families fearful for their lives didn't get this kind of treatment from their neighbours; that the meeting at Shashi Kapoor's building never happened and Shashi Kapoor didn't object? He's has been telling Sameera to produce documents. What documents? Are managing committees likely to put down details of their clearly unlawful conduct in the minutes of their meeting?

In an even more bizarre twist to these events, Veeresh Malik added a comment that Rajadhyaksha was “peddling lies for stirring up communal trouble in the name of a dead man who can't defend himself”. Why would Shashi Kapoor have to “defend himself” for something noble that he was doing for which there was nothing to be ashamed of? The above incident is just one example of what mindless political partisanship has been doing to social media.

Defiance, expletives, rage, the obstinate desire to have the last word, no matter how brazenly absurd, have become part of our daily virtual lives, seeping into and poisoning the real, and we are losing the last shreds of sanity.

In 1945, Eric Bonnhoffer, a Lutheran minister, scholar, and theologian who boldly spoke against Hitler’s policies, wrote before his execution: “The fact that the stupid person is often stubborn must not blind us to the fact that he is not independent. In conversation with him, one virtually feels that one is dealing not at all with him as a person, but with slogans, catchwords, and the like that have taken possession of him. He is under a spell, blinded, misused, and abused in his very being. Having thus become a mindless tool…”

Indians have been pushed to a corner where they are justifying and gaslighting lynchings, misogynist godmen, fumbling U-turns, the worst financial decisions in decades, the undermining of democratic and educational institutions, interference in food choices, bans on films, and religious/caste discrimination.

Sangeeta Bodhi Das, Delhi-based artist and a regular on Facebook, says, “When I was talking to one of these people, a guy called Nagar, I was lost at first. He was ignoring my arguments and facts, not reading the original post or comments. I have been projected as casteist, made to feel hurt and guilty. He was deliberately being deaf and gaslighting me.” 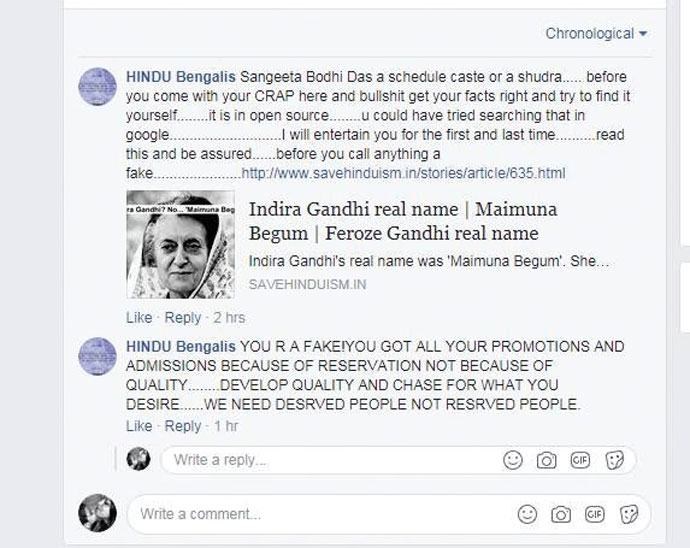 Devdan Chaudhuri, author, essayist and political commentator who has been at the receiving end of these trolls says, “For the last 3 years I have experienced three levels of organised trolling. The first level is the ‘rabid wolves’; their brief is to abuse and threaten with wrong spellings and bad grammar. The second level is the ‘worker ants’; their brief is to copy-paste pre-scripted responses. The third level is the ‘dumb intelligentsia’ who arrive to debate and argue. But all the three levels display similar characteristics — random generalisation, senselessness, bigotry and a viral hatred for fellow Indians and fellow Hindus who don’t prescribe to their ideology and worldview. They call them sickular, libtard, leftard, Jihadis, anti-nationals, Khangressi and so on in order to carry on an organised attack/violence against one’s own fellow citizens that began from 2014, when the troll factory start-up happened.” The situation became even more bizarre and incomprehensible in the last few days during the run-up to the Gujarat elections. Take the recent incident of extreme radical rightwing writer Shefali Vaidya, who is the admin of a page called “The Frustrated Indian”, attacking Maharashtra chief minister Devendra Fadnavis’ wife, Amruta Fadnavis for a Be Santa campaign. The latter was trolled by Vaidya for aiding and abetting Christian missionaries by that simple act, which would not have been worth a passing comment few years ago. Where did she get the audacity to harass a CM’s wife, and that too, a BJP CM?

As positions harden and accusations reach unprecedented heights of viciousness, and unimaginable binaries are created with political corners even in the most innocuous daily things, certain questions do present themselves to mind. Who is pulling the strings of these online activists and why has their activity reached this frenzy, especially at this point of time?

Is it a closing of ranks at perceived threat to the Hindutva project, given the all-around failure of the BJP government in keeping their election promises, the discontent and frustration (that word is a study in irony given it’s misappropriation) of the ordinary Indian with massive business losses post demonetisation, unemployment, breakdown of law and order, and the oppressive GST?

In the three years since the NDA government has come to power, trolling on Twitter and Facebook has reached a point of no return.

Also read: How ‘forced conversions’ lies are being spread to attack Christians in India