Stop the Waffling: The Sri Lanka terror attack was definitively about religion. It was an Islamic attack on Christians. Why fudge the truth?

When Christchurch happened, the liberal reaction was loud and clear, but when Colombo happened, there was a deafening silence. Why are we so hesitant to call one stream of religious thought out?

Islamist terror haunts the globe, from Manchester to Paris to Kabul through to Pulwama and Colombo. The perpetrators are indoctrinated and bigoted Islamists. Their bigotry, taught to them at their extremist universities, tells them there is only one God, he is Allah, and only those who believe in him must rule the world.

Those who do not accept this must be killed. Those who wish to live must either convert to Islam or pay jizia and live as dhimmies. This belief is the driving force for most Islamist terrorist activities across the world today and this belief draws adherents, regardless of economic status or education. Yet, some national silly-billies continue to spout the usual gibberish about terror having no religion. Terror can have a religion — and some terrorists themselves proclaim this.

It is not yet confirmed who committed this latest massacre although ISIS claimed responsibility two days after the attack. The ISIS Amaq News Agency stated that Islamic State fighters had carried out the attack on nationals of the Coalition and Christians in Sri Lanka. But the target was obvious — innocent Christians celebrating the resurrection of Christ.

This confirms that the target was selected on religious grounds.

Rukmini Callimachi, an American journalist who has extensively covered ISIS activities, recently commented that the attacks were sophisticated, with six sites attacked in three cities by seven terrorists.

1. The Islamic State’s news agency has claimed responsibility for the string of bombings in Sri Lanka which left 321 people dead. It’s taken them more than 2 days to do so, which is unusually long for ISIS: pic.twitter.com/DolnkeSAkc

All were successful, unlike those in Paris in 2015, where one terrorist killed only himself and the death toll from 10 attacks was 130 while that in Sri Lanka, fatalities were more than 250 and growing.

The ISIS disclosed the noms de guerre of the seven terrorists, and mentioned which one of them targeted the three churches separately. The video released by the ISIS is revealing — eight of these men pledge allegiance to Abu Bakr al-Baghdadi against the backdrop of an ISIS flag. 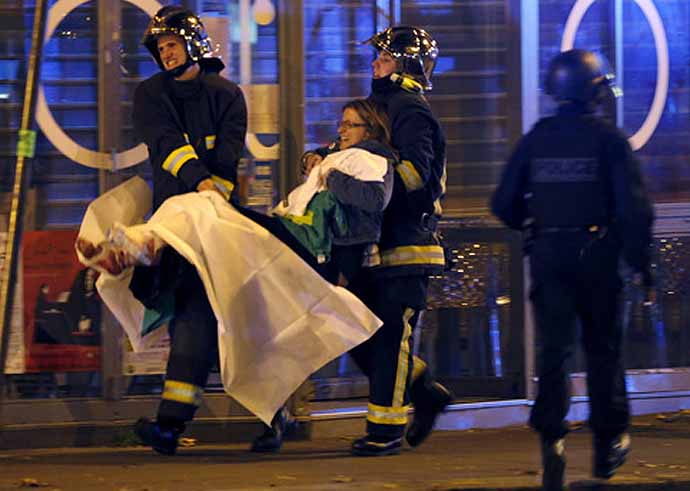 When they struck Paris: The 2015 attack in the French capital left nearly 130 people dead. (Source: Reuters)

This does not mean that the ISIS either planned or carried out the attacks. It merely depicts a group advertising its allegiance to the ISIS and claiming instant global notoriety; more likely, they were inspired by ISIS but not directed by them.

This leaves Indian security agencies with a serious concern about similar radicalised groups in India.

There is also a distinct possibility of other terrorist groups, from Pakistan, claiming allegiance to ISIS — thus absolving Pakistan of any role in any future attacks in India. Considering that Pakistan Prime Minister Imran Khan had admitted some time ago that there was a need for Pakistan to create such terrorists at one time, but that need was over, assuming he has the authority to say so, and, the military, the intention to implement this, one is left wondering where these de-mobilised jihadis would go.

Colombo, April 21, was a replica of Mumbai, March 12, 1993 — except that the targets in Mumbai were mostly commercial. Over 250 are believed killed in this series of explosions in and near Colombo. Both attacks were born out of hatred. The Colombo attack selected churches and upmarket hotels to target local Christians and western tourists. Some now conveniently portray this as a revenge attack for the killings in Christchurch New Zealand, although the Colombo terrorist attack might have been planned much earlier. Some portray the Sri Lanka terror attacks as 'revenge' for the killings in Christchurch, New Zealand. (Source: AP)

Sri Lankan authorities have arrested and killed other terrorists following shootouts as well as recovered lethal equipment, indicating a much larger conspiracy, which may even have extended beyond Sri Lanka.

There are claims by Sri Lankan intelligence that they had received inputs from a foreign intelligence agency about 10 days prior to the attack. The reasons why this intelligence was disregarded or ignored — even the highest in the land were not informed — is not known. There have been allusions to internal political differences that prevent a coherent approach to such threats. Sri Lanka seems to be operating in different silos where the Prime Minister is not even a member of the National Security Council.

The BBC attempted to give this carnage a different colour when it reportedly mentioned that this attack might have been carried out by Buddhists. This potentially damaging conjecture was proffered despite the fact that none of the recent terrorist attacks has been the handiwork of Buddhists but other fanatics. After Christchurch, commentary in the West clearly identified the victims as Muslims and the attackers, white supremacists, inspired by their ideology of racism and Islamophobia. After the Sri Lanka terror, only one of 20 world leaders, from Luxemburg, actually mentioned that the victims were Christians — not one of these leaders mentioned the word Islam.

It was the French President Emmanuel Macron speaking to the media on April 25 who remarked, “Political Islam wants to secede from our republic” and that “We are talking about people who in the name of religion, pursue a political project.” 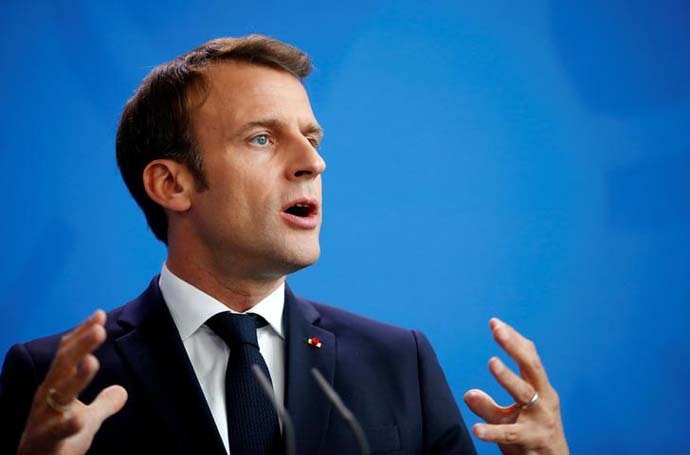 When Christchurch happened, the liberal reaction was loud and clear — but when Colombo happened, there was a deafening silence. Rod Liddle was right when he wrote in The Spectator, London, "The victim group was not named and nor was the ideology... Why should that be?"

The world led by western liberalism has got itself into a tangle over Islam and Islamophobia. What the west does, we in India tend to automatically follow. Therefore, it becomes difficult for this lot to state the truth that the Colombo attack was carried out against Christians by Muslims in the name of Islam.

For this lot, it would be Islamophobic to say so.

Instead, liberals assert that Islam is a religion of peace while terror in the name of Islam is the work of a few nut-jobs and extremists. It is true that there are extremely peaceful Muslims globally who abhor terror in their name — but there is another statistic that should worry us.

After the London terror attacks on July 7, 2005, a poll carried out in 2006 showed that one-fourth of British Muslims polled said the attacks were justified. Earlier, 37% of British Muslims felt that Jews were a legitimate target. A BBC poll in 2015 found that 45% of British respondents polled thought that those imams advocating violence were part of mainstream Islam. Extending this survey globally, Pew Research had found that only 57% of Muslims in the world disapproved of Al Qaeda. This leaves a large number of Muslims who either approve of Al Qaeda or at least have no opinion. The gap between moderates and extremists may not be that wide and this should be a matter of great concern for all because we are talking of millions of Muslims who approve of Al Qaeda — or even ISIS.

The presence of National Thowheeth Jamath (NTJ) in Tamil Nadu, and its affiliates in different parts of the world, needs to be closely watched with renewed international cooperation.

Its links with ISIS should be under a microscope.

At the same time, we need to be careful about blindly assuming that ISIS exists in our region. Seasoned intelligence officers like Amrullah Saleh, former chief of Afghan intelligence, have been consistent in asserting there is no ISIS in Afghanistan; all that has happened is that the Tehrik-i-Taliban Pakistan has assumed this cover for its activities inside Afghanistan to reduce international allegations against Pakistan of interference in the country.

For Pakistan, attribution of terror to ISIS and/or Al Qaeda is a convenient camouflage that delivers desired results in India and Afghanistan — and they do not even have to issue any denials about their involvement.

As in the case of both the three Mumbai attacks in 1993, 2006 and 2008, and now, in Colombo, there must have been considerable and meticulous planning. The recruitment, indoctrination and training of the suicide bombers must have taken some time. There must have been severe restrictions on security and protection of the trainee bombers. The source of material, manufacture of the explosive vests, funding the venture and venue for the training would need an organisation operating with utmost secrecy — over months. 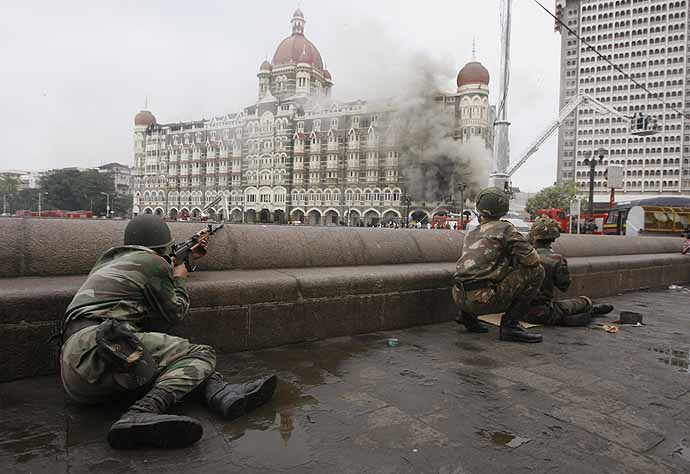 Much like the Mumbai attacks of 2008, there was meticulous planning behind the Sri Lanka Easter attack of 2019. (Source: Reuters)

There must have been some dry runs to select the targets. Conceivably, there is an external dimension. So, connections in Malaysia, Thailand, the Philippines and Indonesia, where the ISIS boasts its “East Asia Province”, the Maldives, Pakistan, Afghanistan, KSA and UAE would need to be ascertained. Sri Lankans, many from the well-educated and elite sections, had joined ISIS in Syria while other Sri Lankans work in large numbers in the Gulf countries where recruitment and indoctrination is possible. There have been reports that some of the wealthy Ibrahim family members were indoctrinated while studying in Australia. The Sri Lanka NTJ, a radical Muslim group, was linked to the destruction of Buddhist temples last year.

The discovery of a huge terror plot close to our borders — and possible linkages in south India — should be a concern to the security establishment in India. In the short term, central intelligence agencies (Intelligence Bureau, Research and Analysis Wing and National Technical Research Organisation) would have to be alert and work in close coordination — but it is vital that the state intelligence agencies, where the effect of terrorist action will be, are ahead of the curve.

Media speculation and revelations should be avoided as these alert terrorists. The tendency to claim successes or foreknowledge defeats counter-terror efforts. TRPs may be good for business — but they can be disastrous for the security of the nation. The Sri Lankans also showed that while they slipped badly on acting on advance intelligence, their reaction to the attack was immediate and professional.

It is important that in the aftermath of an attack, the state is seen to be in control, speculation and loose talk is avoided, apart from taking care of the casualties; there should be only one spokesperson who replies and briefs media at regular events. It is always better to avoid taking questions until more authentic information about an incident is available. Our record on this in the past has been less than perfect.

But these short term quick-fix solutions will not solve security problems. Terror is a long term security problem — it is international in effect, multi-lingual and multinational in content. Subject expertise built over years is necessary; overnight batsmen will not help. Additionally, terrorism will get even more dependent on high-end technology. Intelligence agencies need these skills — in huge numbers now — to manage these threats.

Also read: In the heat of electoral battle do not forget Sri Lanka. Terror must be tackled

Post your comment
#Muslim fundamentalism, #Islamic Terror, #Colombo, #Sri lanka terror attack
The views and opinions expressed in this article are those of the authors and do not necessarily reflect the official policy or position of DailyO.in or the India Today Group. The writers are solely responsible for any claims arising out of the contents of this article.