What Shah Faesal fails to see: Lives of soldiers and policemen matter more than terrorists’ lives

Shah Faesal’s reasons for quitting the civil services might sound pious, but are both disingenuous and economical with the truth.

Generals in Pakistan, IAS officers in India (and increasingly, judges in both countries) have an inflated sense of importance about themselves.

Not only do they think they are the repository of all wisdom in the world, they also feel they have the knowledge and understanding of everything under the sun, and are therefore equipped to do anything and everything.

Not surprisingly, both have brought their countries to the brink of ruin with their hubris and ineptitude.

And yet, because both are deeply involved in the politics of their countries and come in close contact with politicians (for whom both share a healthy contempt), they feel they can do a far better job than them.

Often enough, both suffer from delusions of their popularity. This is partly because while they are in office, there are any number of hangers-on and sycophants who surround them, in the real as well as the virtual world. Facebook and Twitter followers are often seen as measures of their popularity and mass appeal. Hawa Hawa: As Pervez Musharraf learnt, popularity goes away with the position. You're left only with hot air. (Photo: PTI/file)

The former Pakistani military dictator General Pervez Musharraf used to point to his millions of Facebook followers to boast about how popular he was. It was only when he came back from his self-imposed exile — and not more than a dozen people came to welcome him — that he realised how utterly wrong he was.

The bottom-line is that only after IAS officers demit office, and Pakistani generals doff their uniforms, does the harsh reality dawn on them that they were totally wrong about themselves. That is also the time when their soaring ambitions come crashing down on the rocks of reality, and they realise it was their chair, and not their person, that was important.

How many people even know the name of the party that the former Pakistani army chiefs Aslam Beg and Musharraf set up, or the party the former Pakistani chief justice Iftikhar Chaudhry formed, or parties that Indian babus have formed or movements they have tried to lead? Most IAS officers in India end up joining the very political parties they derided. Some plough a lonely path and are drowned by the rough tide of time.

The provocation for this long preface is the sort of hype that allegedly ‘national’ newspapers — they certainly can’t be accused of being ‘nationalist’, but that’s another story — are giving to the resignation of an IAS officer from Jammu and Kashmir, Shah Faesal.

Perhaps, had the media organisations now falling over themselves to project Shah Faesal as the game-changer in the murky politics of J&K bothered to study the track record of former babus in politics, they would have been more restrained and circumspect before implicitly endorsing the separatism being espoused by the former bureaucrat. Some interests are eager to make a poster boy out of Shah Faesal — but he needs to answer tough questions instead. (Photo: PTI/file)

Quite frankly, as someone who resigned from government service within a year of joining — all right, I wasn’t in an exalted, heaven-born service like the IAS, but in the lowly IRTS (Indian Railway Traffic Service) — I have no grudge against anyone quitting the civil service, either to improve their prospects or because they find government service very stifling.

If anything, I always congratulate and wish people who resign the very best for their future, and hope they achieve their dreams.

Alas, I can neither wish, nor hope the same for Shah Faesal.

In Shah Faesal's case, the most polite thing one can say is ‘good riddance’.

And the reason for this lies in not just the reasons he has given for resigning from the IAS, but also his newly-realised persuasions.

Faesal has said that Harvard changed his views on Kashmir.

Regardless of whether he was apparently ‘turned around’ by the usual suspects (our neighbour from hell and their underlings, or by the Islamists who populate campuses in India and the US and strike alliances with the Left) or by the unusual suspects (those who play the long game and cultivate ‘assets’), it is quite clear to my mind that Faesal has virtually seceded from India — and, for now at least, he is a ‘republic of one’.

He says he resigned because of “unabated killings in Kashmir, and lack of any sincere reach-out from the Union Government; the marginalization and invisiblization of around 200 million Indian Muslims at the hands of Hindutva forces reducing them to second-class citizens; insidious attacks on the special identity of the J&K State and growing culture of intolerance and hate in the mainland India in the name of hypernationalism.”

In an earlier post, he condemned “the horrific massacre in Pulwama” (when security forces had to fire on a mob to save themselves) and called it a “personal loss”. Just over a week before he quit, he wrote a rambling piece in which he spoke of ‘sentiment’ (secession/separatism) and advocated talks with the Hurriyat. 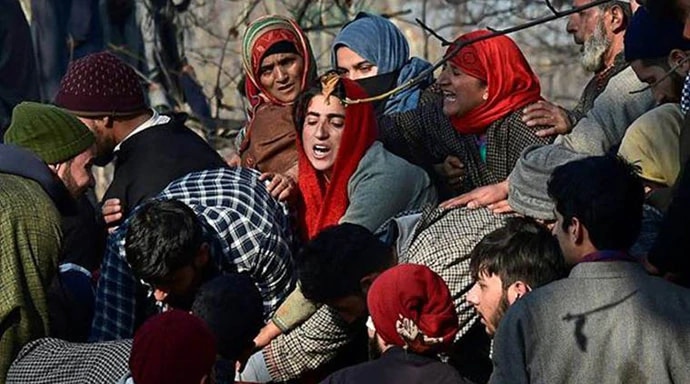 Faesal justifiably mourned Pulwama. But he did not talk about why civilians gather at such encounter sites. (Photo: PTI/file)

After quitting, he has batted a lot more openly for separatists. Not only did he declare that the ‘sentiment’ he keeps parroting “does not relate to the idea of India”, but also hinted that he would enter the electoral field but only to deliver governance — while the Hurriyat would be representative of the ‘sentiment’.

This is an oblique way of saying that he would be the political face or representative of the Hurriyat for electoral politics, while the substantive issue of the future of Kashmir in the Indian union would have to be discussed with the Hurriyat.

Cut through the clap-trap, and it is clear that Faesal aspires to be another Engineer Rashid, albeit a more suave version of the original.

The problems with Shah Faesal’s reasoning are as follows.

One, he laments the ‘unabated killings’, but he doesn’t speak a word about the brutal killings of on-leave policemen, the attacks on cops and other security force personnel, the intimidation and threats they face.

He doesn’t have a single word to say for political workers who were shot down by terrorists. He tweets “Kashmiri lives matter” (perhaps influenced by the ‘Black Lives Matter’ movement in the US), but apparently for him, only some Kashmiri lives (those of terrorists and their over-ground supporters — the stone-pelting mobs) matter.

He condemns the Pulwama shootings — but he doesn’t say a word about why such incidents happen. He neither condemns the terrorists wielding guns, nor the stone-pelting mobs. More than anything else, this exposes both his mindset and his ideological inclinations.

In fact, he even apparently advocates tolerance for separatism and sedition in Kashmir. Interestingly, while he was serving as Deputy Commissioner, he admitted that he used the ‘draconian’ Public Safety Act (PSA) “to bring back order and peace” because that was his job. And yet, when others do their job to restore order and peace, he has a problem. Sympathy for murderous stone-pelters — none for a lone soldier? (Photos: PTI/file)

Two, Faesal has tried to link up Kashmir with the alleged “marginalisation and invisiblisation” of Indian Muslims.

This is an old tack of the Pakistanis and their agents in Kashmir, who have tried for decades to get the rest of India’s Muslim citizenry to weigh in on their behalf.

But Indian Muslims have scrupulously ignored the separatist rhetoric in Kashmir.

In recent years, some noises have indeed been made in the rest of India by some Muslim groups that are part of the pan-Islamist network. But by and large, Indian Muslims have no use for the snake oil of Islamism that many have bought in Kashmir.

Faesal, however, has tried once again to agitate the Muslim population to make common cause with the Kashmiri separatists. In doing so, he has done great disservice to not just Muslims in Kashmir, but also in the rest of India.

Faesal’s open support for the ‘sentiment’ of separatism will only cement the stereotyping of Muslims by the loony right-wing, who doubt every Muslim and question their loyalty to the country.

Their argument that Muslims cannot be trusted with sensitive positions will gain traction — despite the fact that there are any number of Muslims who have served India with great dedication and distinction.

Three, he blames the “lack of credible political initiative” by the Centre and “denial of justice to the people of Kashmir” for the escalation of violence. Of course, not only is he being extremely economical with the truth, he is also being rather disingenuous.

There have been any number of initiatives taken by the government in Kashmir. None of them have been reciprocated by those who claim to be ‘stake-holders’. The fact is there are no credible interlocutors in J&K. The Hurriyat, on whom Faesal places so much faith, is not a free agent, but lackeys of Pakistan — as governor Satyapal Malik once said, they cannot even go to the toilet without seeking Pakistan’s permission.

If the Hurriyet were an independent voice, they would have reciprocated and engaged in a dialogue with the Centre.

Of course, one thing is written in stone — no nation negotiates its own dismemberment. A dialogue isn’t a negotiation for dismemberment — and it is on this point that the Hurriyat has always run away.

As for ‘denial of justice’, Faesal should clearly lay out what he means by this.

The fact is that he himself is an embodiment of the fairness of the Indian system.

Despite all the imperfections and problems, even distortions, in the Indian system, neither caste, nor religion, nor ethnicity is a barrier to someone who is brilliant and hardworking. Shah Faesal is not the only story that affirms this reality. There are millions of others who, despite all the disadvantages they suffered, have risen up and become successful in academics, civil services, business, literature, sciences, you name it, by the sheer dint of hard work and brilliance.

Unless it is Faesal’s case that he was ‘made to’ top the civil service exam to showcase him to his fellow Kashmiris as an icon, he has to admit to the fairness of the system.

Faesal could have used his position to wean away the young people he shows so much concern for from the destructive path they are on — and yet, he has chosen to do the opposite.

With the bureaucrat Shah Faesal having transformed into the politician Shah Faesal, his path to power will be paved with all the hypocrisy and Faustian bargains that make for success in politics. While Imran Khan can be proud Faesal idolises him, Kejriwal should be embarrassed. (Photos: Twitter/PTI)

Like his idols Imran Khan and Arvind Kejriwal, he too will have to become adept in the art of U-turns and political gymnastics. And while Imran Khan would certainly feel flattered that Faesal idolises him, Kejriwal should be embarrassed that he is seen as a guiding light by a separatist.

Of course, he won’t be the first separatist or anarchist attracted to Kejriwal. There are many Khalistanis and Maoists who would like to emulate Kejriwal. But politics is tough business, much tougher than being a bureaucrat.

If Faesal can’t make it, he can always end up either as an op/ed writer in one of the ‘national’ newspapers that are cultivating him.

Or he could follow in the footsteps of one of his illustrious predecessors in service, and become part of the margdarshak mandal of the Hurriyat conference.

Also read: To be a Karnataka MLA: A job that requires you to be on holiday