'Everything seems so calm and normal. It doesn’t look like an undeclared Emergency.'

Suleiman Khan sounded upset. “Anwar bhai,” he said over the phone from Riyadh to his friend in Delhi, “I’ve been reading in the media here that an Emergency has been declared in India. I was planning to travel to Delhi tomorrow. Is it safe to come?”

Anwar Sheikh tried to calm his friend. “Look Suleiman, things are pretty bad, we are in an undeclared Emergency. But don’t worry, come tomorrow. I’ll introduce you to eminent lawyers who’ll tell you how this undeclared Emergency is actually worse than the real Emergency of 1975-77.” Undeclared Emergency? Protests were staged at several places across the country following the arrest of five Left-wing activists on August 27. (Source: India Today)

“Yes,” said Suleiman. “I read an article by a top lawyer last week on the editorial page of an Indian newspaper. He said exactly that. I’d love to meet him to understand this grave crisis facing our country.”

“Done,” said Anwar. “This lawyer is a friend of mine. We’ll also meet lots of intellectuals whom the horrid rightwing media calls ‘urban Naxals’ because they are defending their innocent colleagues who’ve been arrested by the Maharashtra police for helping poor Adivasis and tribals.”

“Sounds good, Anwar bhai,” Suleiman said. “I’ll be in Delhi tomorrow. I’d like to know more about this undeclared Emergency and how much worse it is then Indira Gandhi’s Emergency 43 years ago.”

As he sailed through immigration, Suleiman looked quizzically at his fellow-passengers for signs of anxiety. “We’re now in Emergency territory,” he murmured to himself, steeling himself for any eventuality. He half-expected the armed guard at the exit door of the airport to strip-search him. The guard instead smiled and waved him through.

Outside, Anwar greeted Suleiman with a hug. “Welcome back to India,” he said warmly.

Suleiman looked around warily for jackbooted armymen. “Anwar bhai,” he said, slightly puzzled, “everything seems so calm and normal. It doesn’t look like an undeclared Emergency.” 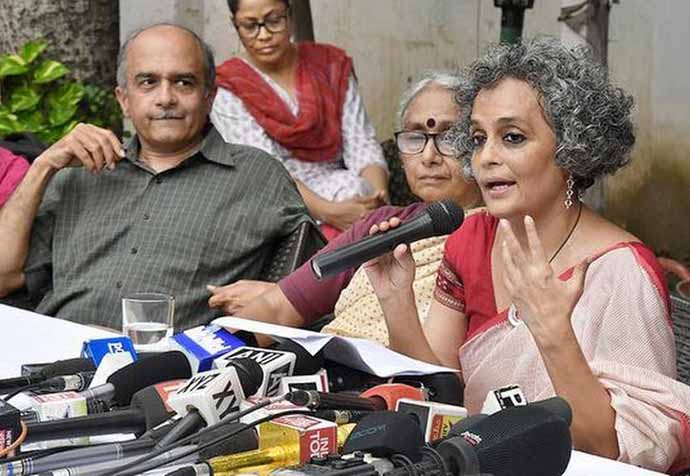 Firing on all cylinders: Left intellectuals and their beef with Rafale fighter jet. (Source: India Today)

Anwar patted his friend on the shoulder. “Don’t be fooled by appearances, Suleiman. The nation is in the grip of fascist forces. Prime Minister Narendra Modi and the RSS, who control him, want to take over every Indian institution and convert India into a Hindu Rashtra. Didn’t you hear our big hope, Rahul Gandhi, speak in Germany and England about how fascist this government is.”

Anwar shook his head. “Don’t worry, Suleiman. Some Muslims here too were upset. But what to do? We in the Congress need Hindu votes in 2019. Rahul has even gone on a pilgrimage to Kaliash Mansarovar to prove he’s a good Hindu. He’d have preferred to go to London instead. But he’s a focused young man. For him politics comes first.”

Suleiman’s eyes narrowed as Anwar continued: “Listen Suleiman, I’ve invited a bunch of people home for dinner tomorrow. They will tell you how terrible things are in India. This undeclared Emergency is just the beginning. Didn’t you hear Arundhati Roy criticising Modi for the Rafale fighter jet scam?”

“No, no, Suleiman, that was just a slip of the tongue by her. Wait till you hear my lawyer friends explain how Modi is turning India into a fascist state and running the economy into the ground.” A happy nation: Like it or not, the India’s economy is now growing at 8.2 per cent. (Credit: Reuters)

Anwar cut Suleiman off mid-sentence. “Forget all those fudged figures, Suleiman. Just wait till tomorrow. We’ll be meeting some of the finest intellectuals in India at my place. They’ll tell you more about this undeclared Emergency.”

The guests began pouring in fashionably late for Anwar’s dinner party. Suleiman recognised the famous prize-winning author with a shock of curly white hair and a high-pitched voice. Ah, he thought to himself, that’s the one who spoke so eloquently against the Rafale ‘aircraft carrier’ scam.

A group of men trooped in after her. Anwar greeted one particularly warmly. “Your edit page piece on how this undeclared Emergency is worse than the old Emergency was outstanding! Well-argued like the good lawyer you are!”

The lawyer smiled: “Wait till Thursday, Anwar. We’ll be presenting our case in the Supreme Court and getting those five intellectuals released from house arrest.”

Suleiman moved closer to him. “Sir,” he said hesitantly, “if there’s an undeclared Emergency in India, why didn’t the government censor your newspaper article? In 1975-77, during the real Emergency, no paper would have dared carry such an article.”

The lawyer looked at Suleiman patronisingly. “My dear friend,” he said, “this is an insidious Emergency where our institutions are being silently subverted by RSS ideology.”

Just then, the famous author wandered towards them. Suleiman smiled: “I’m a fan of your book.”

“Which one?” she snapped.

“Oh both,” Suleiman replied quickly. He changed the subject. “Do you feel intimidated criticising this government?”

She laughed throatily. “Don’t be silly, young man. They dare not censor me.”

Suleiman was now genuinely puzzled. What sort of Emergency was this? He turned to the lawyer who had been following their conversation closely. “Sir, in Mrs Gandhi’s Emergency, over one lakh people were jailed without charges, the right to liberty was curtailed, the Supreme Court was subverted and the Constitution was suspended. Is today’s undeclared Emergency worse that Indira Gandhi’s?”

The lawyer pursed his lips. “Perhaps you weren’t even born then. At least at the time we knew where we stood, which institutions were subverted, what we couldn’t write or couldn’t do, when we might go to jail. There was certitude. Now it’s all so underhand. We are being subverted without our full knowledge. That’s why I call this Emergency so insidious.”

At that point a well-known woman consulting editor of a broadsheet newspaper walked up to them. “Hi guys,” she trilled. She seemed to know the lawyer well and turned to Suleiman. He introduced himself. “Ah, you’re from Saudi Arabia, lovely country. I bet it’s better than this Emergency-benighted Hindutva nation!” She grinned wolfishly.

Suleiman couldn’t believe his ears but wisely kept his counsel. Better not mention the public floggings in Saudi, he thought to himself. “That’s what an Emergency looks like,” he murmured.

“What did you just say?” the editor asked curiously.

She gave him a sharp look but said nothing as she moved away to greet an anchor of a TV programme which upbraided the government every night, left, right and centre, without fear or fetter.

As the guests drifted home, Anwar came up him. “So Suleiman, did you get the answers you were looking for on this draconian Emergency we are all living through?”

Suleiman smiled. “Oh yes, Anwar bhai, I did. This Emergency is so insidious, we can’t actually feel it, I’m told.”

Anwar looked at his friend strangely. “Suleiman, tomorrow I’ll introduce you to some hard-core activists whom the Hindutva media calls urban Naxals. They are nothing of the sort. They’ll tell you more about this undeclared Emergency.”

Suleiman smiled: “You mean, how it’s worse than the real Emergency when lakhs were jailed without charge and the Constitution suspended and...”

Anwar interrupted him with a good-natured groan. “Bro, you’ll never change. Now go get yourself another helping of the mutton briyani. They haven’t banned that yet.”

(Explainer: This is a part of the continuing series of two close friends, Suleiman Khan and Anwar Sheikh. Suleiman works in Saudi Arabia and is politically curious. Anwar is a rising Congress leader. For earlier parts of this series, visit the author’s page on DailyO.)

Also read: Is India on its way to become a censorship state?

#Urban naxals, #Left-liberals, #Modi, #Undeclared emergency
The views and opinions expressed in this article are those of the authors and do not necessarily reflect the official policy or position of DailyO.in or the India Today Group. The writers are solely responsible for any claims arising out of the contents of this article.