Isle of Dogs: Why Wes Anderson's stop-motion animation film is a real story

Acclaimed novelist Orhan Pamuk believes "dogs do speak, but only to those who know how to listen".

The dogs in Wes Anderson's latest — Isle of Dogs — mainly speak in American English, but convey a lot about the language of power spoken across present-day "isles of hatred" that we live in. The film is Anderson's second stop-motion animation, the first being 2009's Fantastic Mr Fox. Anderson's Isle of Dogs is the third film in a trilogy after Moonrise Kingdom and The Grand Budapest Hotel.

The stop-motion —  a technique used in animation to bring static objects to life on screen — animation film is set in a fictional Japanese city of the future, Megasaki. The innocuous-looking story of a boy’s search for his lost dog stabs deep and rips open the layers that hide the throbbing hatred at the centre of our societies. Creating islands of hate and trash: A still from Wes Anderson's Isle of Dogs

The mayor of Megasaki, Kobayashi, is a hereditary ruler who decides to exile all dogs to "Trash Island" after an outbreak of canine flu. They are then left to fend for themselves and die of apathy — with nothing but scraps of garbage to eat and little or no clean water to drink.

The first one to be sent is Spots, a bodyguard and companion of 12-year-old Atari (Koyu Rankin). Now Atari happens to be the mayor's ward after the 12-year-old's parents die in an accident. Spots was gifted to Atari as a guard dog when the boy was brought into the mayor's home.

The film is mostly centered around five dogs — Rex (voiced by Edward Norton), Duke (Jeff Goldblum), King (Bob Balaban), Boss (Bill Murray), and Chief (Bryan Cranston). But Chief, unlike the other four, was always a stray. The others are all former house pets who are now strays. Chief, as a result of his tough life, is impatient and insensitive towards the rest of the four and their nostalgia for the good old days with human beings. He believes in fighting for survival and goads them to do the same.

Meanwhile, Atari sneaks out with a plane in the hope of rescuing Spots. His plane crash-lands and puts him in the middle of the five dogs who eventually decide not to eat Atari and instead help him find Spots.

Although the journey to find Spots is the main plot of the film, there is a backstory behind the banishment of dogs by Kobayashi — an ancient grudge. It is said the members of the Kobayashi dynasty were essentially cat lovers and simply hated dogs. So much so that they once tried to wipe out the entire dog population of Megasaki and nearly succeeded. But a boy samurai stopped the genocide and killed the head of the Kobayashi clan. Ever since, while dogs repopulated Megasaki, the Kobayashis had always looked for a way to get rid of them.

The Trash Island operation is one of those attempts.

With his technically stunning, visually breathtaking animation story, Anderson takes us on a journey of real lands, hundreds and thousands of miles away from Megasaki.

If mayor Kobayashi does this under the false pretences of “canine saturation”, “dog flu,” and “snout fever” in an imaginary land, there are modern-day democracies and their heads who are pushing for ghettoisation and the persecution of a certain "dog" population, in the name of fighting dangerous infiltration, terrorism and the growing drug trade.

Anderson may not have had to look for inspiration far too away from his own country.

Miles away, there is an equally, if not more, violent story playing out in India, in the state of Assam. For 13-year-old Butuk, Isle of Dogs is his story. Butuk sees himself as Atari and his house help, Selim ka, in Spots' hapless place.

The other day over a long telephone conversation, Butuk sounded clueless about why his Selim ka no longer talks much. Selim ka, Butuk says, hardly sleeps these days ever since his wife was declared an illegal immigrant by a foreigners’ tribunal and sent to a detention centre. Although many have tried to make him understand that no one will send away "genuine Indian citizens" to Bangladesh, Selim ka knows the mechanisations of fate.

Now in his 50s, Selim ka says he has never been to Bangladesh. In fact, he doesn't even know how he became a Selim.

Selim (named after Emperor Akbar's eldest son Salim) was an orphan, raised by a garage mechanic in the Dhubri district of Assam. When Selim was around 11, the garage mechanic brought him to Hemolata, Butuk's great grandmother, and left him with her, with the promise that "you give him food and clothes, he will work for you, he will do all your chores". 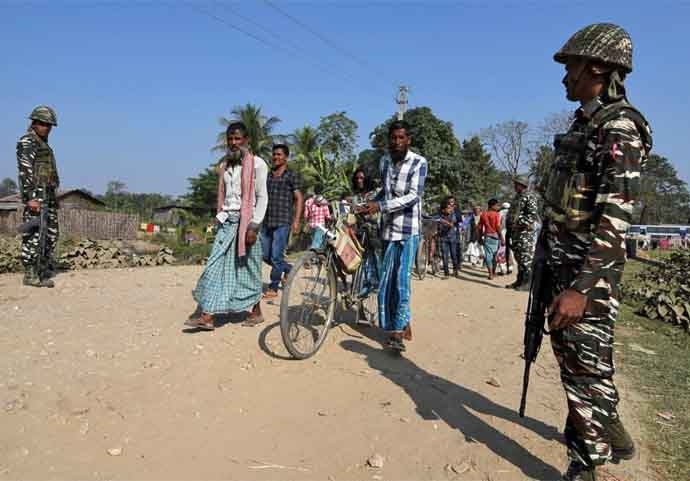 On radar: Villagers walk past CRPF personnel patrolling a road ahead of the publication of the first draft of the National Register of Citizens (NRC) in a village in Nagaon, Assam. [Credit: Reuters file]

Since that day, Selim has been living with Hemolata's family. No one could ever figure out why Hemolata, an otherwise "stingy and mean" matriarch, according to her grandchildren, chose to take in an "outsider". Selim did everything Hemolata would ask him to do — running errands, tending to her plants, cleaning the house, mopping, washing. To everybody's surprise, Hemolata even allowed Selim to enter her kitchen and wash baason (utensils).

But there were some boundaries and both maintained those without any conflict. Like, Selim was not allowed to touch the hearth, he couldn't cook but he could eat the same food as others in the family, of course, in his own plate, and sitting on the floor.

Over the years, from the boy who ran errands, Selim became the driver of the house — something he could proudly tell his friends. "I'm not a servant, I'm a driver."

When he was in his late 30s, he got married to a girl from Goalpara, a match suggested by the same garage mechanic. Because of Selim's wife, he developed a connection with Goalpara. He even managed to save money and build a small house in Gaolpara since his wife insisted they should spend the latter years of their lives among their own people. But for Selim, there is just one family — back in Hemolata's house. While his wife chose to go and live in Goalpara, Selim bought some more time from her to be with Butuk's family — Hemolata is dead, but this is still Selim's family, after all.

The man feels torn between two worlds now. He doesn't know why his wife is suddenly suspected to be a Bangladeshi. Sometimes he too feels maybe the woman's family along with the garage mechanic made a fool out of him and got him married to a Bangladeshi. For now, Selim ka is waiting for answers because he doesn't have any other option.

Butuk tells his mahi (maternal aunt), "I wish we could make Selim ka's wife an Axomiya again. At least he won't be so sad."

Many in Assam who initially campaigned for the detection, detention and deportation of "illegal immigrants", are now offering a solution with a "global context" —  of creating an “organised labour force” since "deportation of those found to be non-citizens is no more an option". But detection should be done nevertheless, they feel. And then, their names should be struck off the voters’ list. They suggest, since there is a huge demand for "low-skilled labour and domestic workers" in Assam and elsewhere in India, this organised labour force could be utilised (How thoughtful of them, indeed).

But ask people like Selim and he will say he is not sure what to expect from such "solutions" — the ghettoisation and fears of internment loom large.

The dogs of this isle don't know whether there ever will be an Atari and his plane to end their journey of uncertainty.