The Delhi chief minister seems to have emerged as the latest rallying point for the Opposition parties ahead of 2019 general elections.

Aam Aadmi Party (AAP) leader and Delhi chief minister Arvind Kejriwal loves to stage dharnas or sit-ins at the drop of a hat, quite often taking his political pyrotechnics to ludicrous levels. But the problem is that his second and current tenure as Delhi chief minister coincides with a Bharatiya Janata Party (BJP) led government at the Centre, headed by Prime Minister Narendra Modi whose political conduct is based on the same principle: Offence is the best defence. The result is daily confrontations and acrimonious spats between AAP-led Delhi government and BJP-led central government with people of Delhi ending up as sole victims.

The latest in the long list of these standoffs is the weeklong sit-in by Kejriwal, his deputy Manish Sisodia and ministers Satyendar Jain and Gopal Rai in the waiting room of lieutenant governor Anil Baijal's house demanding that IAS officers end their "strike" and approve doorstep ration delivery scheme of his government.

Incidentally, the IAS officers' association held a press conference on Sunday (June 17) and denied being on strike and also refuted AAP's claim that they are biased towards the Centre. 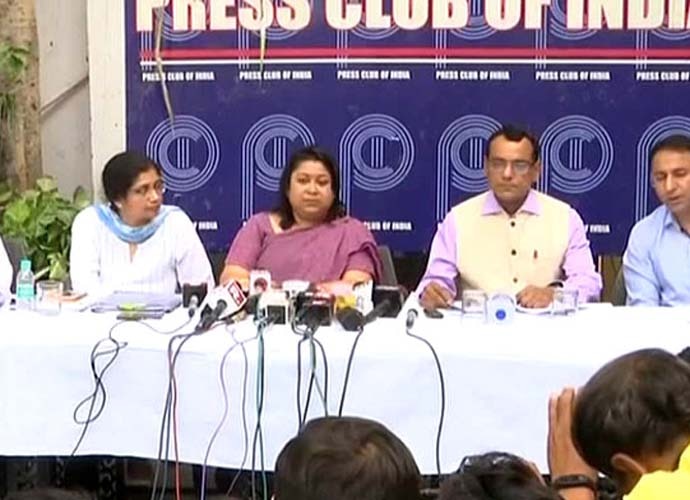 Things came to a boil on Sunday evening when thousands of AAP supporters attempted to take a procession to the prime minister's residence but were stopped by the Delhi Police on the ground that prior permission had not been sought for the march.

As a result of the stalemate, central Delhi remained in a state of lockdown for hours and Delhi Metro authorities shut down five stations on the advice of the police, inconveniencing thousands of commuters. But the significant aspect about this march was that it was joined by hundreds of CPM cadres.

CPM leader Sitaram Yechury tweeted thus ahead of the march:

Joining the protest rally to the Prime Minister’s residence today toexpress serious condemnation over the manner in which federalism, afundamental feature of our Constitution, is being undermined by this BJP Central government. (1/n)

This brings us to an important political aspect of this developing story: More and more Opposition parties have waded into the ongoing political standoff in support of Kejriwal, who seems to have become the latest rallying point for Opposition parties which are not fighting shy of displaying their unity against the monolith of BJP after a string of victories in recent by-elections in many states.

Kejriwal has found support from east and south as four chief ministers - West Bengal's Mamata Banerjee, Andhra Pradesh's N Chandrababu Naidu, Karnataka's HD Kumaraswamy and Kerala's Pinarayi Vijayan - have lent open support to him. First, they tried to meet Kejriwal at his sit-in site at the L-G's residence on June 16 but were "denied" permission. The four chief ministers then scored a valuable brownie point by trooping to Kejriwal's residence and met his wife Sunita and conveyed their solid support to Kejriwal's fight against the Modi government. On June 17, they took up the matter with PM Modi at a NITI Aayog meeting.

The ongoing AAP-BJP tiff is no longer a Delhi-centric news and has acquired national dimensions as the BJP and the rest of the Opposition prepare for the next general elections due by April 2019.

The development has several important repercussions all major stakeholders.

India's newest political party which has been ruling Delhi for the last 40 months has been forced to bear the brunt of brutal central government powers led by the BJP by way of raids on the premises of the party, ministers and office-bearers. The period has slapping of many criminal cases against them by the Central Bureau of Investigation (CBI) and repeated undermining of the democratically elected AAP government through the office of the L-G.

But the present episode shows that finally Kejriwal has managed to tilt the political scales in his favour as he secured support from four chief ministers, each of whom is an important leader of the ruling party in his or her state. This will embolden AAP further and the Modi government will be prolonging the standoff at its own peril.

The standoff has come at a time when Delhi has been in the grip of a severe pollution crisis and just when the residents of Delhi needed a government that tackles this public health hazard in double quick time they found that the chief minister, the deputy chief minister and two ministers, including health minister Satyendra Jain, are staging a dharna in the air-conditioned waiting room of the L-G House.

An equally important point to be mentioned in this context is that of the 15 years on the trot Sheila Dikshit served as Delhi chief minister. From December 1998 to December 2013, she spent nearly six of her initial years when the Atal Bihari Vajpayee-led BJP government was ruling the Centre. During this period no such drama of daily confrontations with the Centre took place. Perhaps that was because Vajpayee was a large-hearted liberal prime minister and Sheila Dikshit knew the art of surviving like the tongue survives between two sets of teeth. Kejriwal has miserably failed in learning this art.

The conduct of the Modi government has been dubious in dealing with non-BJP governments in different states. The Centre under Modi has repeatedly used the office of the governor and the L-G for obstructing the work of elected governments particularly in places like Delhi and Puducherry.

This kind of conduct goes contrary to amicable Centre-state relations and in fact compels various Opposition parties to join ranks to take on the BJP. This is precisely what has happened this time. Never before during the past 40-month-long AAP rule the Opposition regional satraps had come to the rescue of AAP as they have done this time. This is a warning shot for the Modi government which it can ignore at its own peril.

It's time for PM Modi to make an immediate and positive intervention.

For Congress and Opposition unity

The much-talked about Opposition unity, which has worked wonders of late, is a mirage in the context of Delhi. The reason is that the Congress has not only stayed away from the efforts of the four chief ministers to bat for Kejriwal's cause but has also taken a belligerent stand against AAP with former chief minister Sheila Dikshit and Delhi Congress president Ajay Maken attacking Kejriwal for his protest.

This is because the Congress is fancying chances of its electoral victory and appears confident that the people of Delhi will reject both the warring parties in the next election.

It's not for nothing that Congress president Rahul Gandhi did not invite Kejriwal or any AAP leader for his iftaar party last week. This stance of the Congress should send cheers in the BJP camp.

Post your comment
#Narendra Modi, #Rahul Gandhi, #Opposition unity, #Arvind Kejriwal
The views and opinions expressed in this article are those of the authors and do not necessarily reflect the official policy or position of DailyO.in or the India Today Group. The writers are solely responsible for any claims arising out of the contents of this article.