How India is failing miserably in upholding law and order

India has long been low on rule of law. Despite a well-crafted Constitution and an elaborate-looking judicial system, ground-level realities have proven consistently depressing on this count. The trend too moves from bad to worse.

The World Bank indicator for Rule of Law for 2016 (the last year for which data has been compiled) saw a drop in India's ranking from 92 to 100 over the previous ten years.

The events of 2017-18 could only have pushed the country further down.

Another related marker of the severity of the situation is India's placement at the second from the bottom among 69 countries measured in 2017 against a Global Impunity Index.

This index takes into account the situation in a country with respect to security, justice and human rights — all areas where India fares miserably. 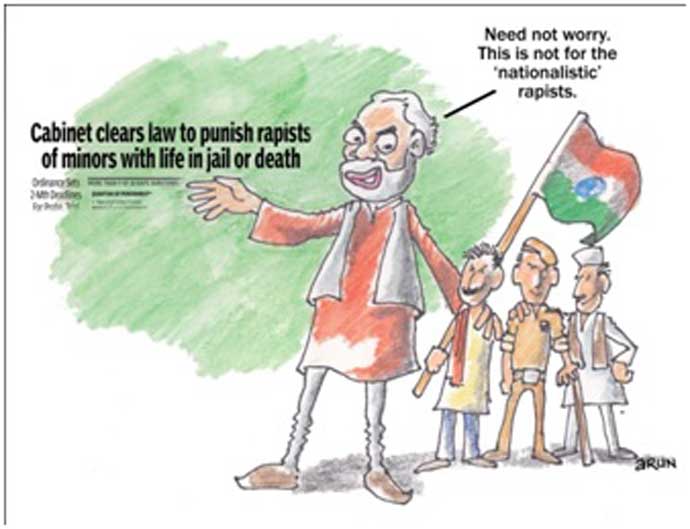 As is normally the case, lawlessness has its source in the immunity it receives from those at the top. Events in 2018 have seen the impunity of the ruling parivar and its disregard for rule of law scale new heights, both without and within the government and the state apparatus.

Hang the rapists, exempt 'our' rapists

The most highlighted has been the blatant justification of the rapes in Kathua in Jammu and Kashmir and Unnao in UP by the ruling party's leading functionaries. Ministers even led demonstrations in favour of the Kathua rape accused and Sangh Parivar lawyers even tried to physically prevent the chargesheet from being filed. In Unnao, the state machinery not only colluded with the rapist BJP MLA by not even registering an FIR for months, but also facilitated the brutal battering and killing of the survivor's father, for having the temerity to try and lodge a complaint.

Despite a wave of protest actions throughout the country, the regime fluently managed to deflect the discontent and divert it away from the main issue of the role of the ruling party and state machinery. BJP functionaries and camp followers skilfully shifted the focus of the agitation towards mere demonisation of all rape accused and to channelising the movement's demands towards sham "solutions" such as "Hang the rapists!"

The Modi government quickly "responded" with an ordinance introducing death sentence for child rape. The Yogi Adityanath-led Uttar Pradesh government had, just around the same time, taken the decision to withdraw a seven year old chargesheet of rape against Swami Chinmayananda, a former minister and close friend of Adityanath. This was alongside a mass withdrawal of more than 20,000 cases against BJP members, including Adityanath himself. There has also been the removal of cases relating to a number of heinous offences. We thus experienced the bitter irony of a government, on the one hand, passing laws with harsher punishments while, on the other hand, simultaneously making a mockery of the rule of law itself by exempting their own from indictment.

All this however was drowned by the Parivar amidst their manufactured cacophony of praise for the so-called decisive governmental action. 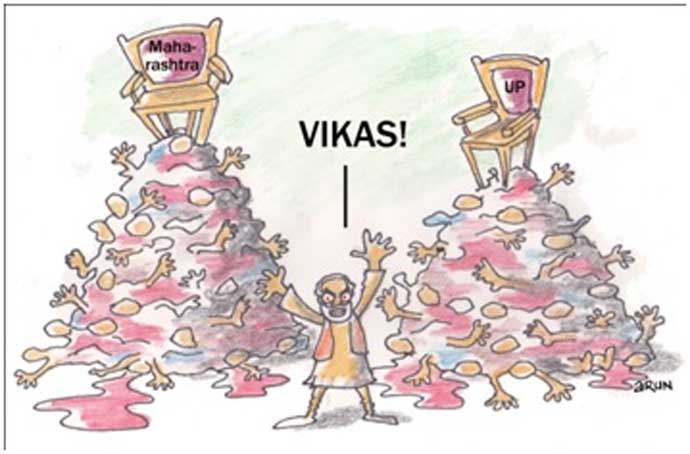 Another chilling trend is in the use of fake encounters by the security forces to murder opponents of the regime and those inconvenient to the party in power. It is not that fake encounters have not happened before. There has, however, not only been a significant jump in the numbers, but also a much more barefaced use of this admittedly illegal tool.

In the short period of just over a year that the Yogi government has been in power, it has notched up 50 killings in almost 1,500 "encounters". A taped conversation, between a police officer and a person targeted for killing, disclosed how the potential victim was being advised to do a deal with the BJP to avoid being murdered. Despite the purpose of the Yogi encounter policy being clearly exposed, the encounters continue with full impunity and immunity to the killers.

In Maharashtra, a "successful" encounter by the police claimed more than 40 adivasi lives in Gadchiroli in April 2018, without a single police personnel being injured.

Human rights organisations have called it a fake and cold-blooded mass murder, whereas local villagers have asked for an independent inquiry, as many of their children who had gone to attend a wedding have been listed as missing, with their bodies still remaining unidentified.

Fake encounters are murders by the state and therefore a gross contempt for rule of law and this is known to all in the political, bureaucratic, judicial and media establishment.

Nevertheless they have become so routine as to acquire the acceptance and even silent approval of those running Indian "democracy". Yogi Adityanath's approval is however anything but silent. He relishes taking credit for himself ordering the killings, thus setting a new low in disdain for constitutional values.

Taking a cue from this sort of behaviour at the top, the security forces too are setting new benchmarks for ghoulishness. The Maharashtra Police celebrated their "success" with a party of song and dance at the Gadchiroli police headquarters. The videos were not only shared on social media but also publicised approvingly by all the mainstream networks. One national daily called it a mantra of "Work hard, party harder!"

Rare are the stories of even Nazi occupation armies celebrating and jubilating at the mass killings of the citizens they subjugated. For a force presumably tasked with the protection of the people, the death at their hands of more than 40 fellow citizens from the poorest of poor communities of their land should have been cause for regret, if not mourning.

While their obscene display of delight is thus a telling commentary of how they have been instilled with contempt for the country's laws and its people, the loud cheers from the sidelines by the media — the self-admitted fourth pillar of any democracy — is a more damning comment on the pathetic state of India's polity.