Congress to fight alone in Uttar Pradesh: 5 reasons why not tying up with SP-BSP will help the party

The grand old party seems to have a shrewd plan for Uttar Pradesh, the grandest stage of Indian politics.

After the Samajwadi Party (SP) and the Bahujan Samaj Party (BSP) made public their seat-sharing pact for Uttar Pradesh, the Congress on January 13 announced it would fight on all 80 seats in the state.

This indeed is a tough challenge for the Congress. However, going it alone might just be the party’s best bet. Here are five reasons why:

The grand old party still holds some charm for the Hindu upper castes. However, that charm is not enough to make the ‘pro-backward castes’ SP or BSP palatable to these voters. Were the three parties to fight together, in constituencies where there is no Congress face, these voters would rather pick the BJP. 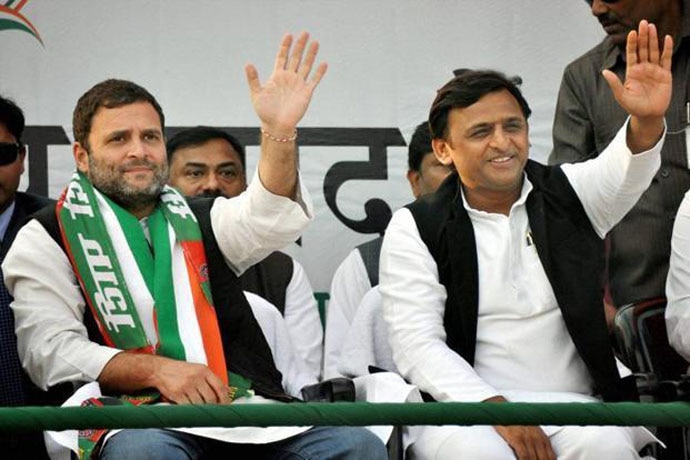 Once bitten: This proved to be a disastrous idea in the 2017 state polls. (Photo: PTI/file)

We saw this factor playing out in two recent elections — the 2017 Uttar Pradesh state polls, and the more recent Gorakhpur and Phulpur by-polls. In the Assembly elections, the Congress-SP alliance ate humble pie. In the by-polls, where the fight was triangular among the BJP, Congress, and SP-BSP, the Bua-Bhatija combine took the cake.

In Phulpur, the Congress’ Brahmin candidate, Manish Mishra, cut into the BJP’s votes. In Gorakhpur, as this report says, the margin of victory between the SP candidate and the BJP’s nominee was almost equal to the votes polled by the Congress' Suhita Chatterjee Kareem.

Thus, even on the seats that it does not win, the Congress can help keep the BJP out by eating into its upper caste vote share.

The flip side to it could be the Muslim vote splitting between the SP and the Congress. But voters know that a state election is different from parliamentary elections, and may back the party with the best shot at ruling the Centre.

Had the SP-BSP-Congress fought together, the BJP would have found it easy to polarise the elections as ‘everyone-against-Modi’. The personal appeal of Prime Minister Narendra Modi is still considerable. Also, such a polarisation would have quickly taken on communal colours. With the Congress and the SP-BSP fighting separately, the campaign can be about ‘Gujarati Modi’ versus Uttar Pradesh’s own leaders, and centred around caste, rather than religion.

For all the pre-poll exchange of fire, a tacit understanding between Congress and SP-BSP can’t be ruled out.

The alliance has rather politely decided to not fight from Amethi and Raibareli, the Gandhi ‘family seats’. The Congress has been at pains to emphasise that it’s ready to work with all “anti-communal” forces.

Even in Chhattisgarh, in several seats, the Ajit Jogi-Mayawati tie-up, after publicly rebuffing the Congress, strategically fielded nominees who belonged to the caste/community of the BJP candidate.

This kind of understanding will be the Opposition’s best bet to keep the BJP out.

Even after fighting separately, the Congress and SP-BSP can join hands post-elections, like the Congress did with the JD(S) in Karnataka. In Rajasthan and Madhya Pradesh, Mayawati flexed muscle before the elections, but announced support to the Congress after results were announced.

Rahul Gandhi leading the Congress’ charge alone in the politically most crucial state of India makes for far better optics than him piggybacking on SP-BSP.  The Congress won all of 2 seats in the 2014 polls —anything up from here will be an improvement for the party, and Rahul can be given the credit for that. Also, if the Congress does manage to perform respectably in Uttar Pradesh, it will strengthen tremendously the party’s position at the post-poll bargaining table, and the claim of Rahul Gandhi to be Prime Minister.

Also read: Gathbandhan Games: As SP, BSP finalise tie-up, UP looks set for a triangular fight. But who will this really work for?

#BJP, #SP, #BSP, #Congress
The views and opinions expressed in this article are those of the authors and do not necessarily reflect the official policy or position of DailyO.in or the India Today Group. The writers are solely responsible for any claims arising out of the contents of this article.