You must be a 'good girl', Hadiya!

As Indian women, we must be good girls. We must marry the “right person”, obey our parents and never ever convert to another religion. Even boys should be “good boys”, but you see “boys are boys” after all. Sometimes, they make mistakes like rape, assault, demand dowry or something else, but as a great culture, we don’t give a major boy’s “custody” to his parents because he might be sent to join the ISIS. We can't lock boys up anticipating they might join global terrorists like we locked 24-year-old Kerala woman Hadiya up. If we started putting men in custody anticipating what crimes they might commit, most humbly, I believe a lot of Indian men would be in their parents’ “custody”.

Having covered the Hadiya case in the Supreme Court for the past few months, I am almost convinced that there is a “well-oiled machinery of conversion and radicalisation” which commits “psychological kidnapping”. I believe we must trust the premier investigating agency of the country. But I fail to understand how all of this justified keeping Hadiya in her parents’ “custody”. Quite logically, one would arrest people indulging in radicalisation, ban organisations and book them for sedition if they recruit for ISIS, but why put Hadiya under house arrest? Will we start locking up everyone who is “gullible, fickle-minded or not capable of making decisions”?

As senior lawyer Kapil Sibal, representing Hadiya’s spouse Shafin Jahan, pleaded before the Supreme Court: "We all are indoctrinated in a certain way, should we all be locked up? What is the definition of radicalisation?"

The court wanted to probe an academic question: "At what stage should one speak to the individual? What are the limits of personal liberty? When can the court interfere in personal choices like marriage, conversion and liberty?" 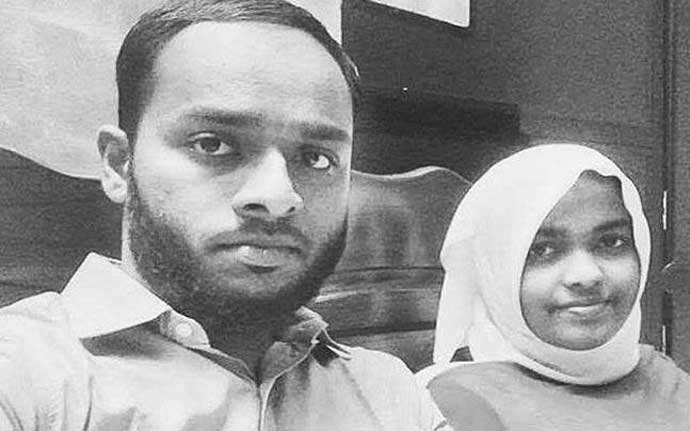 By claiming privacy, we do not succeed in keeping the state at bay.

The Supreme Court bench even suggested that they should debate on the academics first and then decide whether Hadiya should be heard at all. Sibal rightly questioned: "Why was she called at all, if the court didn't want to hear her?"

After a heated exchange between Justice Chandrachud and Kapil Sibal, Hadiya was finally heard in a conversation that lasted for more than 20 minutes. The court asked Hadiya about her dreams, ambitions and what she wanted to do with her life. Rhetorically, she demanded freedom and said she wanted to continue with her studies. The court asked if she needed the state to bear her expenses, she said her husband would do that.

The court asked if a local guardian should be appointed, to which Hadiya said she doesn't want anyone but her husband to be the guardian.

At this point, Justice Chandrachud remarked: "I hope you understand, no husband is the guardian of his wife, at least I am not of my wife."

They rightly say that patriarchy is about gender but it's not gendered.

In those 20 minutes, at no point did the court ask Hadiya directly about her conversion, her marriage or her beliefs, but one excerpt of the conversations should be quoted:

Justice Chandrachud: “Do you want to complete your studies?”

Hadiya: “I want to complete my studies and stay true to my faith.”

Justice Chandrachud: “We are all people of faith. Hope you understand that you also have to be a worthy citizen of society?”

Justice Chandrachud: “Being true to your faith and being a worthy citizen are consistent. I hope you understand that?”

Hadiya: “I understand. I was apprehensive that my parents won't understand, hence wanted to stay away.”

The apprehensions of the court are pretty clear in the conversation. In the questions one can sense an effort to decipher religion from radicalisation. The court's queries centred around her studies, her course and whether she plans to make a career out of it.

Hadiya's case is a classic example of how misogyny and phobia feed off each other. The case exemplifies that in a politically-fuelled cultural war, women's bodies become battlegrounds. Across the democratic world, radicalisation has been a threat. But I don’t know of a case law where a “docile, gullible” woman has been sent in her parents’ “custody” and not allowed outside her house, literally guarded by the state. After more than eight months of “custody”, the case of Hadiya reeks of an urge to “protect women” from cultural onslaught. Implicit is the assumption that women can be captured, lured and can’t make decisions for themselves.

What's further interesting is that the Supreme Court hasn't overturned the Kerala High Court order which annulled Hadiya’s marriage. Once it is established that Hadiya is of a stable mind and does not need psychological help, on what ground does her marriage stand annulled?

The Supreme Court has itself observed: “There is no law that prevents an individual from marrying a criminal" or "the worth of the partner does not determine the sanctity of marriage."

The Supreme Court, at least for now, did not delve into the questions of consent and free will but was convinced that the so-called custody of Hadiya should be done away with.

They sent her to complete her studies and told the dean to report if there is any disturbing incident.

So, while Hadiya will study like any other student, is she free? Can she meet the man she married? Will she be morally policed at the hostel? For how long will the state monitor her?

Is it mandatory for her to be the good girl?

Also read: Why I decided to enrol at Sangh School of Sexism