Why the 'cricket diplomacy' between India and Pakistan makes me hopeful

One bat, one corridor, one tweet, one body of water, one speech at a time.

On Imran Khan’s party Pakistan Tehreek-e-Insaf winning the 2018 general elections, as congratulatory messages poured in from all over the world, there was one message that remained in my mind for its sheer unexpectedness. The Indian High Commissioner to Pakistan Ajay Bisaria’s presenting of a cricket bat to the then prime-minister-elect Imran Khan, on August 10, 2018, could have been just another gift of a neighbouring country to a cricket legend, but it was much more than that. 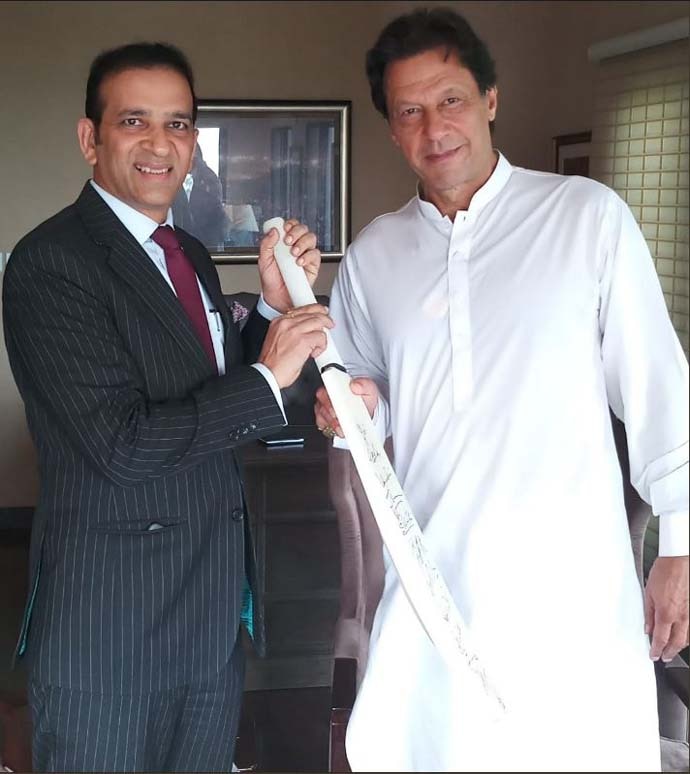 The bat signed by the entire Indian cricket team headed by Virat Kohli was a special felicitation message from the country with which Pakistan’s relationship has been less than ideal — to put it diplomatically — for quite some time now. In the India of today where hyper-nationalism is sadly mistaken for patriotism, and where cricketers are treated like demi-gods, for the Team India to send a gift to Imran Khan was, to me, a most effective overture of peace packaged in the signatures of the entire cricket team that the unifying force of sports like that of faith, culture, literature and art is beyond hostility, beyond memory of wounds of the past, beyond iciness of diplomatic impasses.

On August 18, 2018, as the whole of Pakistan and millions of people across the globe watched Imran Khan’s swearing-in, the most significant image of that ceremony after the prime ministerial oath of Khan was the hug between Pakistan’s Chief of Army Staff General Qamar Bajwa and India’s Member of Parliament and minister of local government, tourism, cultural affairs, and museums of the State of Punjab Navjot Singh Sidhu. A hug that spoke louder than many thousan volleys of guns. (Photo: ANI)

In India where the Pakistan army is considered to be the biggest roadblock in the establishment of peace between Pakistan and India, that warm hug, to me, spoke louder than many thousand volleys of guns. That the Pakistan army and the Establishment along with Pakistan’s new prime minister are receptive to a new direction in Pakistan-India status quo. That learning from lessons of futility of conflict there is no alternative to not only co-existence but to also the formation of a framework that even when taking slow, baby steps must be to guarantee the initiation of an untried dynamic between the two hostile neighbours. General Bajwa spoke about opening the Kartarpur corridor while adding: “We’ll even think of doing better things.”

On November 28, 2018, the groundbreaking ceremony of the Kartarpur corridor connecting Gurdwara Darbar Sahib in Kartarpur, district Narowal, Punjab, Pakistan to Dera Baba Nanak in district Gurdaspur, Punjab, India. What was termed as a historic event facilitating the long journey of Sikh pilgrims to one of their most sacred holy places to a mere few kilometres, what was covered in that day was not merely geographical distance.

The ceremony also marked the beginning of diminishing of a long history of mistrust and paranoia, one Sikh yatri after the other thanking Prime Minister Khan for Pakistan’s good-spirited and good-hearted gesture of making a holy pilgrimage an easy journey. Khan accompanied by COAS Bajwa and Indian guests, Union ministers Harsimrat Kaur Badal and Hardeep S Puri, and Navjot Singh Sidhu, performed the groundbreaking in a simple ceremony that spelled in its dignity that while political differences deepen distance, respect of each other’s religious sensibilities brings people of different faiths and countries together in a manner that is unquantifiable in its splendour.

On January 9, 2019, Prime Minister Khan, in a world that is being torn apart by hateful words and is riven with perpetuation of jingoism and building of walls, showed with one tweet what it is like to rise above everything negative and send a message of felicitation that is gracious and warm. Khan’s tweet mentioning Virat Kohli and the entire Indian cricket team was not just a message of mubarak to the winning team of the neighbouring country, it was also, to me, a reminder of the shared history of that one region that gave birth to both Pakistan and India in August 1947: the subcontinent.

Khan tweeted: “Congratulations to Virat Kohli and the Indian cricket team for the first ever win by a subcontinent team in a test series in Australia.” To me that tweet is symbolic of much more than mere congratulations. Pakistan and India despite suspicion and lack of trust have the capability of moving forward connecting people on a personal level. The bond of love for cricket connects in a way the beauty of which wouldn’t even be dampened by the perpetual pandemonium of a warmongering media and chest-thumping politicians.

Khan as the prime minister is someone who I believe is not merely willing in theory but is also ready to translate into action his desire to have a peaceful relationship with India focusing on bilateral issues and bilateral interests. If India’s victory to Khan is the historic win of the first ever team from the subcontinent, there is in my mind no doubt that Khan wishes to have a new paradigm between Pakistan and India that would focus on the similarities and the commonalities of the two neighbours instead of letting the ghost of a bloodied past haunt the present and the future of more than 1.50 billion people of the world, millions of which on both sides of the border struggle to have two meals a day.

On January 11, 2019, Pakistan’s Federal minister for water resources Faisal Vawda in a series of tweets said: “Pakistan and India have been into Indus water treaty dispute for ages. Due to our continued efforts, there’s a major breakthrough that India has finally agreed to our request for inspection of Indian projects in Chenab basin. We welcome this gesture from India and we expect the same spirit for the resolution of other outstanding issues.”

Pakistan and India have been into Indus water treaty dispute for ages. Due to our continued efforts there’s a major breakthrough that India has finally agreed to our request for inspection of Indian projects in Chenab basin.

The long-standing issue of water is another obstacle in any kind of positive progress in Pakistan-India relations, and the January 11 breakthrough is a hugely positive development in the possible removal of a problem that is responsible for a state of suffering for people on both sides of the Chenab basin.

In Prime Minister Khan’s words, Pakistan and India must “break the shackles of the past” to forge a new dynamic.

Khan during the Kartapur ceremony said: “If France and Germany who fought several wars can live in peace, why can’t India and Pakistan?”

Khan further added: “We have just one problem, Kashmir. If the man can walk on the moon, what problems are there that we cannot resolve? We only need determined leadership on both sides. If India takes one step forward, Pakistan will take two steps forward in friendship.”

While India insists on not moving forward with any kind of dialogue until “Pak-centric terror” is ended, Pakistan’s information minister Fawad Hussain said to India’s The Hindu on a question regarding Jamaat-ud-Dawa and Lashkar-e-Taiba: “We are bound by the UN resolution (under UNSC 1267). So there is no question of lifting the ban. There is just a misconception because of the lapse of the [anti-terror] ordinance... This is a matter still under consideration. The law ministry’s advice is still awaited. The [JuD/LeT] organisation remains banned. And the matter is now with the law ministry. So no final decision has been taken.”

The anti-war and pro-dialogue Khan is categorical on the issue of terrorism, and while speaking to Indian journalists on November 29, 2018, Khan reiterated: “It is not in our interest to allow use of Pakistan’s territory for terror outside.”

The pro-peace, pro-new beginnings, and anti-violence and anti-violations of human rights in Jammu and Kashmir, Khan also said in response to a question about Pakistan’s lack of action apropos the culprits of the Mumbai attacks:

“I can’t be held responsible for the past. Hold me to account if I break my promises.”

These few words of Prime Minister Imran Khan say more than several rhetorical speeches of any recent past leader of Pakistan. Now peace-seekers like me in Pakistan are waiting for India to respond. In kind. In positivity. In the willingness to open a line of dialogue. People on both sides of the Line of Control deserve that. All Kashmiris deserve that.

Here is to the hope of a new beginning. One bat, one corridor, one tweet, one body of water, one speech at a time.

For once, I have an urge to hold my breath.

Post your comment
#Cricket, #Virat Kohli, #Imran Khan, #Indo-Pak ties
The views and opinions expressed in this article are those of the authors and do not necessarily reflect the official policy or position of DailyO.in or the India Today Group. The writers are solely responsible for any claims arising out of the contents of this article.